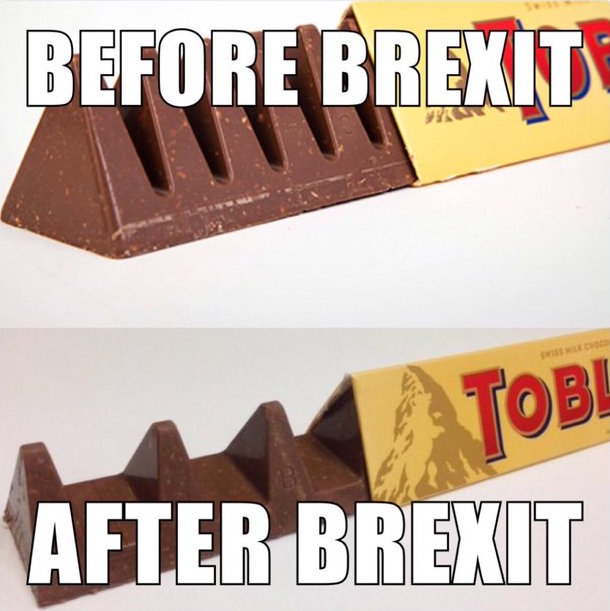 Loyal fans of Toblerone reacted with horror on Tuesday after discovering that the distance between the triangular chucks in their favorite chocolate bar had expanded overnight.

According to CNN Money,

“Mondelez International (MDLZ), which produces the airport shopping staple, blamed rising ingredient prices for the change. By adding space between the triangles, the company was able to keep the bar’s original packaging and length, but reduce the amount of chocolate.

Like many other companies, unfortunately we are experiencing higher costs for many ingredients. We carry these costs for as long as possible, but to ensure Toblerone remains on shelf, is affordable and retains the iconic shape we all know and love, we have had to reduce the weight of this particular bar,” Mondelez said in a statement on its Facebook page.

The result is that bars that formerly weighed 170 gram have been slashed to 150 grams. Forty grams have been carved out of bars that used to contain 400 grams. The price remains the same, but customers are getting roughly 10% less chocolate.”

Here are some reactions on social media:

#toblerone #brexit I told you that leaving the EU would have serious consequences. Now I’ m really upset. pic.twitter.com/w81cWYpNl4

#toblerone #brexit I told you that leaving the EU would have serious consequences. Now I’ m really upset. pic.twitter.com/w81cWYpNl4

Toblerone cut its 170g bars to 150g and its 400g bars to 360g only in UK after post Brexit £ slide forced up costs pic.twitter.com/jjNztu3RBT

The new #Toblerone.
Wrong on so many levels. It now looks like a bicycle stand.#WeWantOurTobleroneBack. pic.twitter.com/C71KeNUWF1