A Corps Member, Elechi Chinyerum, 27, on Tuesday died at the Bayelsa National Youth Service Corps (NYSC) camp after bleeding and vomiting on arrival at the camp.

According to PUNCH, the graduate of the Ignatius Azuru University of Education, Port Harcourt, Rivers State, was confirmed dead about 9pm on Tuesday five days after arriving at the camp.

The report added that the deceased looked “terribly sick” when she arrived at the camp on Thursday last week.

A source said, “The doctor at the NYSC camp’s clinic immediately referred her to the state-owned Diette-Koki Memorial Hospital in the Opolo area of Yenagoa, the state capital, where she was confirmed dead.”

According to some NYSC officials,  the development was a case of “non-disclosure” of state of health by the corps member.

Another Corps member, Ukeme Monday who was deployed to Zamfara state, has also kicked the bucket. His friend, Imo Udo (@immopat) shared the sad news on Instagram on Friday. He wrote:

November 22nd….. We went to itam market to buy our kits for the orientation exercise.

November 23rd…..We all departed Uyo to our respective camps.

December 1st…… I got the sad news that you’re no more.
What a ruthless you world.

Ikpa, whatever reason that made you leave this world so soon is unfair.
Why now? But why now?

After all the stress and sleepless nights we went through together for 5years.

You made a First class,
You were overall Best in the ’10 Engineering class,
You won about four scholarships.
You organized free tutorials for junior colleagues and even your own mates.

I really don’t have words to express how felt when I heard the news about the your untimely demise.
…….and I really can’t understand why God allowed this one to happen.
Brotherly, though you are gone, I know your legacies and the impact you created will forever be remembered.

Rest On Ukeme Monday
It is well
God knows best 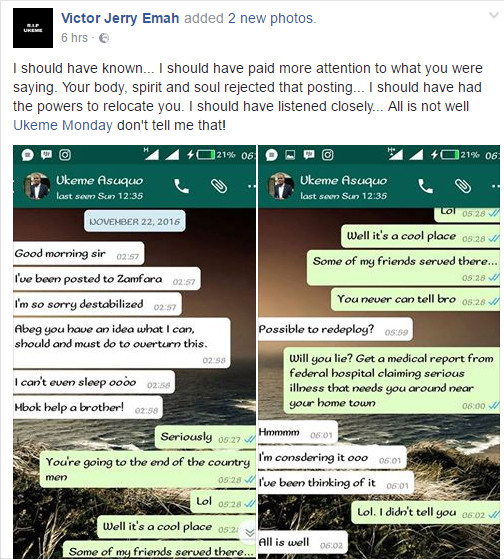 This sad news is coming after the death of Oladepo Ifedolapo, a graduate of  Ladoke Akintola University of Technology (LAUTECH), who lost her life due to negligence by NYSC officials who thought she was feigning sickness and refused to attend to her until things got out of hand.