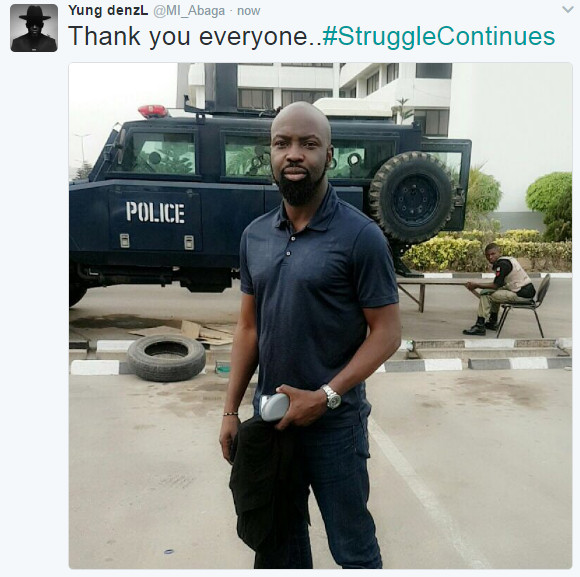 Chocolate City boss, Audu Maikori who was arrested by the police on Friday – February 17th, has been released.

A Tweet by his colleague, M.I disclosed the information on Saturday.

This is coming after a series of tweets by Advocacy champion, Oby Ezekwesili.

Ezekwesili had said that she persuaded the Governor of Kaduna state, Nasir El-Rufai to facilitate Audu’s release after she discovered he was arrested.

Audu was said to be  arrested for publishing a story on the killing of five students of College of Education, Gidan-Waya, Kaduna.

Audu said that his driver related the story to him, adding that the driver told him his (driver’s) brother was among the victims. Turned out the story was false; Audu apologised and retracted the statement.

Audu this apology helps as an entry point to lessons of yesterday’s event which I only caught up on very late & my call to Governor of Kaduna  (Nasir El-Rufai) today.

I urged the Governor of Kaduna (Nasir El-Rufai)  to get Audu out & he replied that his policy of Consequences was important for stemming killings in #SouthernKaduna.

(Nasir El-Rufai) stated that the actions for which Audu apologized inflamed the #SouthKaduna conflict more & so the law taking its course.

I asked (Nasir El-Rufai) to consider Audu’s apology and his unfortunate arrest as a TEACHABLE MOMENT for both the Government & everyone.

People already know how stridently I insist on EVIDENCE-BASED ADVOCACY. WE all must take a LESSON from this. #LESSON

There’s no basis for a Govt clamp down on Citizens’ FACT-BASED advocacy on ANY ISSUE. So Audu admitted he was WRONG. Accept it (Nasir El-Rufai).

I told (Nasir El-Rufai) that it was best to FREE Audu & use this as the Govt’s POLICY MOMENT to get its MESSAGE of CONSEQUENCES thru to Public.

(Nasir El-Rufai) stated that he had personally reached out asking Audu to not post those particularly untrue stories but he had continued.

I pressed on the NECESSITY for (Nasir El-Rufai) to act to FREE Audu and allow all sides to LEARN the RIGHT LESSON from this painful episode.

At the end of our discussion, (Nasir El-Rufai) agreed to ACT and FREE Audu quickly and end this unfortunate development. WILL WATCH OUT FOR IT.

(Nasir El-Rufai) had stated that @Audu would be charged to court on Monday. I urged that since he already apologized, Police can CAUTION & RELEASE.

Upon release today, I very much hope that (Nasir El-Rufai) and Audu can find points of COLLABORATION on #SouthernKaduna after this sad episode.

All folks on the two sides of the divide baying for blood really must know that Nigeria CANNOT SURVIVE a Religious War. Shield YOUR SWORDS.

Soon, our Land SHALL SURELY be HEALED of the TOXIN of HATE that has become the medium of communication and resolution of disagreements.

All folks on the two sides of the divide baying for blood really must know that Nigeria CANNOT SURVIVE a Religious War. Sheath YOUR SWORDS.

PDP Crisis: “We will work with Ali Modu Sheriff and go to a convention” – Ben Murray-Bruce