What You Should Know About Erica's Time in the #BBNaija House, Laycon & Relationship with Kiddwaya

The WINNER Of #BBNaija Season 5 Is... Laycon

Did you watch day 25 of the Big Brother reality TV show?

Arranging the Housemates into position, ThinTallTony reminded the Housemates that they needed to nail the opening and final sequences of their musical production. He said these two aspects were the most difficult to master.

The choreographer asked the Housemates who had two left feet to step back and let those who had mastered the dance take the front rows. 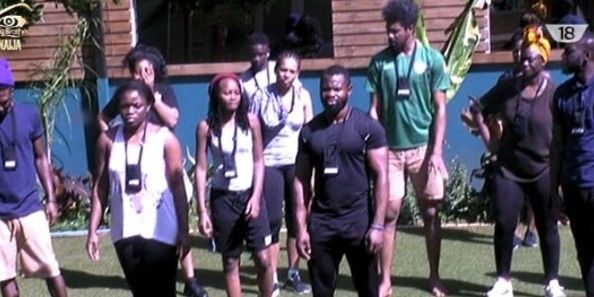 This weeks’ Task was to make musical instruments using items such as containers, bins and tins, compose three songs from different musical genres, namely Traditional Nigerian Music, Modern Nigerian Hip Hop, as well as any musical genre of the Housemates’ choice. In addition, they had to make costumes for their bands.

The Housemates were grouped into three bands and the names and members were:

The categories to vote for were:

3) Best Male Performance in a Musical

4) Best Female Performance in a Musical.

With the Housemates hard at work on their Make Noise Task, Biggie decided to have some fun. In the store room, Biggie placed chicken costumes and egg costumes and instructed Head of House, Ese to decide which Housemate would wear each costume. But, after a discussion it was decided that they would pick their fate out of a tin.

The eggs were – ThinTallTony, Marvis, Kemen, Ese, Bally, and Debie-Rise. 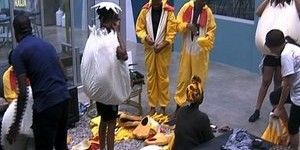 In this task, each time Housemates heard a rooster sound the chickens had to chase the eggs and sit on the eggs in the nest until they hear the buzzer. As there are only seven chickens and six eggs, the chicken that didn’t catch an egg had to do the dreaded chicken dance until the buzzer sounds.

Bally’s scheme of having a few bottles of alcohol hidden away from the rest of the Housemates certainly ruffled up a few feathers.

Bisola seemed the most irked by this and she went in, guns blazing and all for Bally and Efe, who seemingly knew more about the missing bottles of alcohol than they were willing to admit.

Bally’s decided to hide a few bottles of alcohol last night, after Biggie gave the Housemates a crate of Legend stout, as soon as they finished rehearsing their musical production. It was Biggie’s way of rewarding the Housemates for the hard work they had put in so far for this week’s Task.

Bally wasn’t the only culprit in on the plan to hide the alcohol, as Efe assisted him to hide the bottles under the kitchen table last night.

While Bisola and Bassy were arguing, ThinTallTony pitched in, adding that if Biggie gave them alcohol, it should have his name labeled on it. The argument was ended by the sound of the buzzer, which prompted the Housemates to once again get into character for today’s “Catch The Egg” game.

It was all fun and games in the House until Biggie reminded the Housemates about the Task Presentation in the evening.

Biggie opened up the Arena and allowed the Housemates to rehearse one more time. 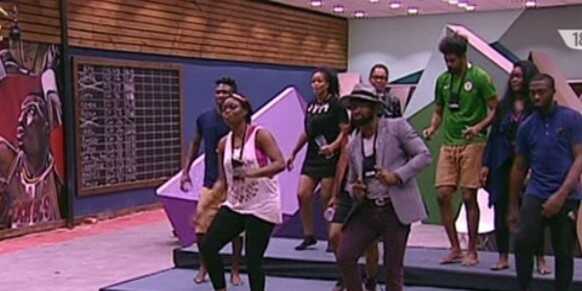 Immediately after HOH Ese read Biggie’s message after the game, the Housemates quickly got into character and went through their paces in the Arena. ThinTallTony went about his duties of handling the choreography and also got into character later on.

Fake Housemate, Ese got tasked with getting under everyone’s skin and it seems she’s done a stellar job so far! She confessed in her Diary Session that she felt awful about her antics however, as she’s actually a loveable person. Biggie was quick to remind her not to get caught up in the game and distracted from her goal and she reluctantly agreed to cause more chaos. That said, the only one of her victims she admitted to not liking was Gifty. 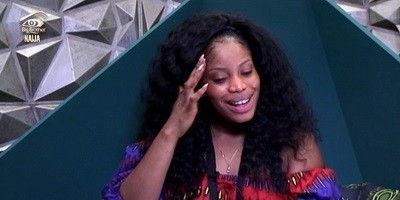 The most irritated of her targets on the other hand was Uriel who was fuming in her Dairy Session. It all started on (Day 5) when Uriel confided in the Housemates that her mom has a terminal mental illness (dementia) and she has fond memories of how she’d call her “Yuyu” as a child. Everyone took a liking to her baby name and started calling her that but Uriel felt they were tarnishing something sacred and asked them to stop. Enter Ese, who yesterday (Day 24) decided to use the term of endearment to tease Uriel, completely ignoring not just Uriel’s protests but those of all the Housemates present. 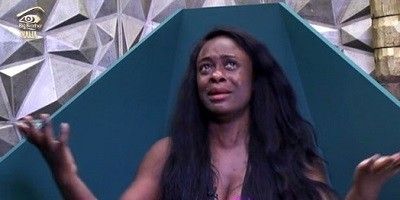 Uriel exploded into tears of frustration and said all she could do in the moment was give Ese a “plate of rice” and remind herself not to stoop to her level. She also noted how her hands were shaking throughout the exchange.

The Housemates worked extra hard and put in “110%” to make sure they aced their presentantion this week! However, as they learnt the hard way last week, winning a wager entails consistantly doing a great job at all tasks, not just the main presentantion. 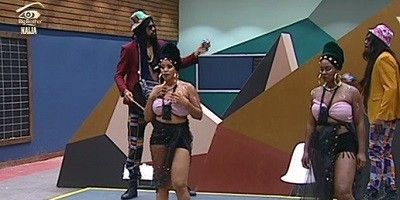 Kicking off the show were Tube featuring ThinTallTony, Uriel, Bally and Ese. The two ladies had a pretty nasty tiff yesterday and Uriel broke down in tears when she recounted the moment in her Diary Session. However, any bitterness or resentment was completely set aside as there was a 100% wager at stake. They split into a two part harmony, dancing seductively to the bluesy hook of their song “They must See Gobbe!” . ThinTallTony and Bally provided percussion and ad libbed further lifting the atmosphere. 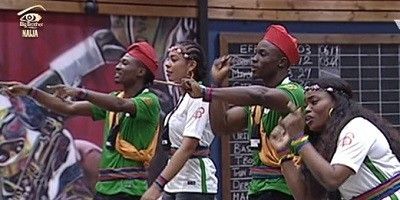 Next to take the stage were Systematic. TBoss and Bassey dropped the beat as Bisola sang the chorus and danced alongside Efe who dropped two rap verses for the song. Closing off the show were Resonance with Jon, Debie-Rise, Kemen, Marvis and Gifty. Jon and Debie-Rise lead the vocals while the latter also strummed away. They ended they’re performance with a spirited gyration before. 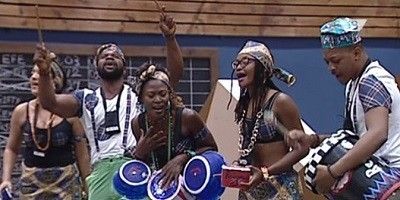 Then it was time for the grand finale! The Housemates performed a musical as group where TBoss played a young girl who is a gifted painter but whose father (Jon) does not approve of her vocation. She flees to go make it big in the city but struggles to make ends meet until one day a talent scout (Kemen) gives her a big break!

Biggie was impressed too, calling the performance splendid and announcing that the Housemates had won the 100% wager. They ran around the arena screaming before heading to the store to collect their reward. Pizza and an ice cold beer for everyone!

Beyoncé shares New Photos from Solange’s 2017 Grammys After-Party and it looks like so much FUN!

“Watch the queen conquer” – Mercy Eke is so ready for 27!

Can You Guess the Celebrity Mum of these Cute Boys?