Toke Makinwa and Maje at their Wedding in January 2014

Maje Ayida, the estranged husband of media personality Toke Makinwa has hired law firms from the UK and Nigeria to see to the stoppage of sales of Toke’s Memoir – On Becoming – released November last year.

Maje’s lawyers sent Toke a “letter of demand” to that effect.

Toke had written about her relationship with Maje, accusing him of cheating while they were dating and even after they got married. She also accused him of infecting her with Sexually Transmitted Diseases (STDs).

The legal documents describe the book as nothing but “exaggerated fabrication,” adding that it contains “defamatory words”.

The law firms the fitness expert hired are Carter-Ruck, a leading defamation law firm in the UK to top figures like Simon Cowell, Elton John and Chelsea FC, while Kemi Pinheiro (SAN) of Pinheiro LP is heading the legal front in Nigeria.

Things fell apart between Toke and Maje in 2015 after the former discovered that the latter impregnated a lady while they were married.

The Bone of Contention

According to the letter of demand sent to Makinwa, her estranged husband was said to have “requested legal separation” from her “within 6 months” of their marriage in January 2014 — “when it became clear that the marriage was breaking down”.

Toke was alleged to have signed a legal separation agreement in July 2014, TheCable Lifestyle was informed.

The letter said it was well documented that Makinwa and Ayida had agreed to separate by July 2014, which the book failed to record.

“The book misleadingly describes the circumstances at the time,” the letter read.

Pinheiro LP, the Nigerian law firm, said it was untrue that Maje had given her an “STI in the past or at any stage in their relationship.”

The law firm also noted that it was “highly misleading” for the book to allege that Maje “did not financially contribute adequately” to the marriage.

“The publicity sought by you has been relentless, and limitless,” said Adebowale Kamoru in the letter of demand, on behalf of Pinheiro LP.

Effect of the book on Maje’s Career

The law firm further noted that the publication has brought “public ridicule” on Maje, noting that his reputation has been “assaulted, injured and damaged.”

“His professional integrity as one of the leading health and wellness practitioners in Nigeria, and his professional credibility built over the years through dedicated hard work have been besmirched”, the letter said.

According to the law firm, Toke’s representation of Ayida in the book was “not a true reflection of who he is, his character and his background.”

Maje Ayida, through his lawyers, has, among other things, informed Toke to retrieve the already-sold books and stop all forms of distribution, TheCable Lifestyle understands.

It further said a failure by the popular celebrity to “retract” the “published words” and tender a full page unreserved apology to Maje Ayida in three national dailies “will result in the commencement of legal action.”

Makinwa was also advised to “take immediate steps” to stop the distribution of the books on Amazon, iTunes and all forms of promotion on her social media accounts.

She was given seven days upon receipt of the letter to comply with the demands or they’d be forced to seek legal redress.

The warning letter was said to have been delivered to Toke on Monday, December 23, 2016.

Toke is set to hold a book reading in Ghana on Friday, February 3.

It can’t be immediately confirmed whether she received the letter of demand. 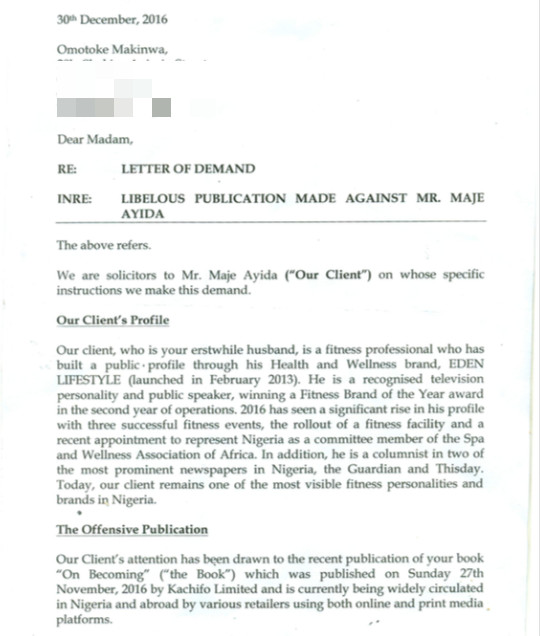 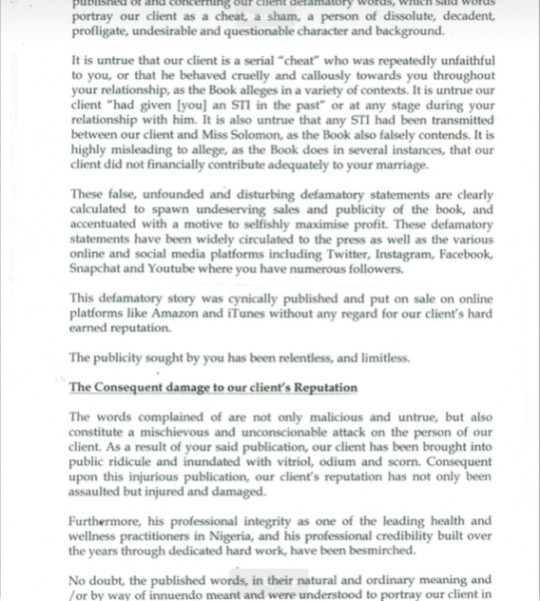 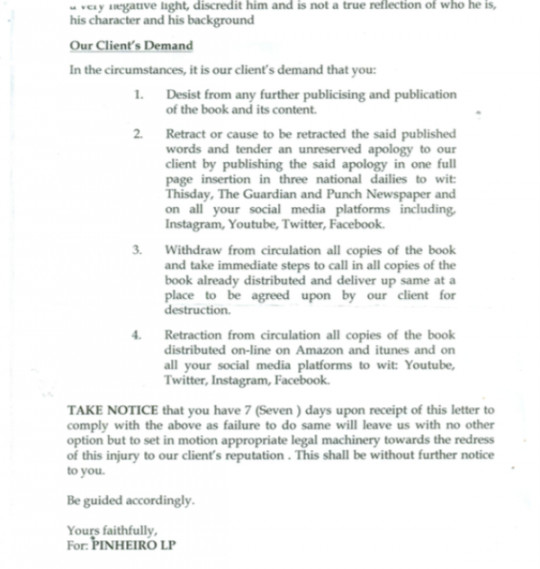 “As the mother of six children, who were all born in foreign lands and are proud American citizens, I very much want our country to be safe for them” – Read Angelina Jolie’s Op-Ed