Did you watch day 67 of the Big Brother Reality TV show?

Biggie joked that he wanted to let the Housemates have “a nice experience of the garden” before revealing that everyone had to pack all they needed to survive and head out to the yard for the rest of the Day. They weren’t allowed back inside except for brief, supervised bathroom breaks. No one saw it coming so before Bisola was even done asking if they had understood the brief the Housemates shot up from their seats and were running around. 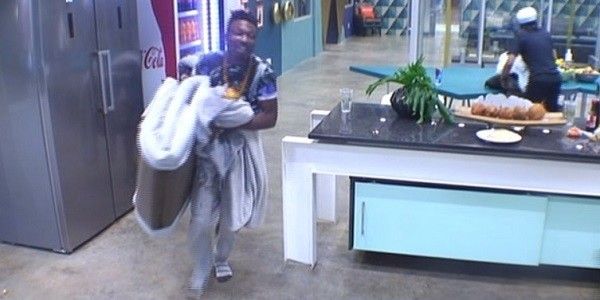 Seeming to relish in their panic, Biggie sounded the buzzer while they were still wrapping their heads around what was going and things went from chaotic to crazy. In a frenzy, they rushed to get blankets, drinks, water and every item of food that they could fit into their hands. A second buzzer then sounded and the Housemates could be heard yelling to each other to grab random items they’d need. In that instant, two Ninjas swaggered into the House to kick them out and shut the door. 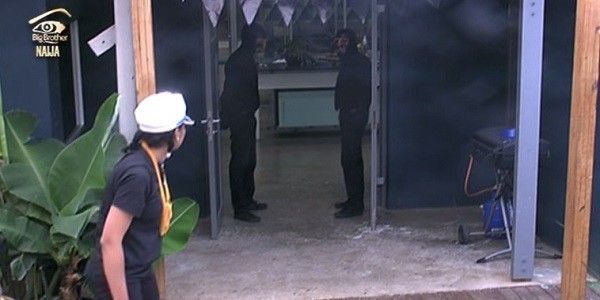 When the adrenaline started wearing off, Efe and TBoss immediately started begging for a bathroom break which the Ninjas graciously obliged to but before long everyone was sat outside, chatting and joking as one big group for the first time in a while. We’re pretty sure Biggie’s got more in store for them and we can’t wait to see what new, gruelling challenges the day presents. 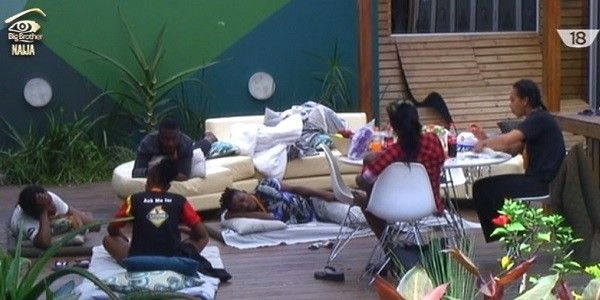 The look on the Housemates faces when they walked into the Arena was priceless. It’s Extreme Survivor week and so far Biggie has really put them through the most. Paint guns were strewn on a large table so we can only imagine what kind of pain they thought was in store considering yesterday’s happenings. Biggie soon put their worries to rest pointing out that this time they’d be shooting at targets and not each other. Smaller targets carried more points than the larger ones as they were harder to hit. The reward for winning was an opportunity to get one of their bags back. 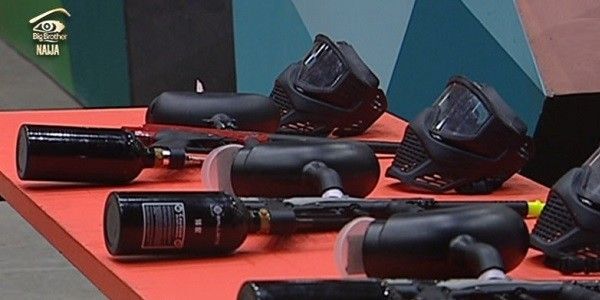 Big Brother dictated the running order with TBoss kicking things off. However, she didn’t seem to have much luck. She missed every single target and also argued that her paint gun was faulty and only fired five out of the eight times she was afforded. Bally and Bisola had better luck when they followed up her effort but they were only able to graze the smaller and more valuable targets. The trend followed this pattern and by the end of the first round, Efe was the only one who’d managed to hit the bull’s eye and score 100 points! 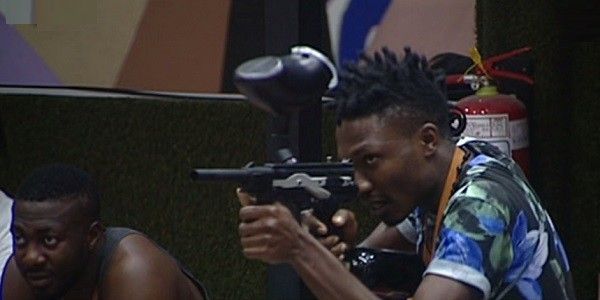 Feeling generous and a little sorry for our Housemates, Biggie elected to give them another round. It proved to be a worthwhile gesture because the Housemates had much better luck with Bally and TBoss managing to hit the 100 point target and tie with Efe for the lead. Naturally there had to be a tiebreaker and in the end, Bally had the best round hitting a whopping, three, 100 point targets while Efe and TBoss missed all their shots. Biggie declared Bally the winner with 400 points scored!

Trading blows to sway the vote!

Since Biggie gave the Housemates the green light to conspire there’s been all manner of shade being thrown back and forth. On the one hand, we have Bally, Bisola, Efe and Marvis or “the fantastic four” as they’ve affectionately been named by their fans. On the other, we have BFFs Debie-Rise and TBoss. Both sides are pulling all the stops to make sure they survive Eviction this Sunday and their latest tactic is gossip.

“The clique” have made it a point to state that Debie-Rise and TBoss are manipulative and love to play the victims as if they do no wrong. TBoss and Debie however, think the other four are rude bullies who have excluded them and tried to get rid of them since day one. Almost every conversation by both camps has hinged on these Narratives and interestingly, it’s always followed by a campaign for Votes. The pattern has played out so many times now that it’s clear they’re are throwing each other under the bus to “tarnish” their competitor’s rep and skew the votes in their favour.

Everyone is guilty of mudslinging and this morning “The fantastic four” came for TBoss once again but singing a different tune. They called her selfish and noted how she hoarded things that were meant to be for the entire House use. “She put am for cupboard!” Efe said of TBoss hiding hair cream that was meant for communal use. Bally accused her of doing the same thing with the nail polish remover pocketing one of the two bottles and leaving the rest of the House to share.the other. Bisola then chimed in and called her wasteful before scoffing at the fact that she called herself exposed but did all sorts of uncultured things.

All fair in love and war, however. TBoss and Debie-Rise have taken their fair share of jabs at “the clique” especially Efe whom they practically called foolish for seeking out a relationship with Marvis.

Marvis was first to kick off this evening’s Diary Session as she was summoned into the Diary Room. Biggie immediately asked her what the mood in the House was, and she said the mood was great. She was quick to add that being stuck in the garden hasn’t been as bad as they had anticipated. She told Biggie that conspiracy in the House has made the divisions in the House very visible; four versus two. She also added that they were hoping to score high enough to unlock the “save a Nominated Housemate” option, and as soon as Biggie asked her she said she would save Bally if they had gotten that option. She also refused the offer from Biggie to redo the five impossible missions from yesterday. Before she left the Diary Room, she told Biggie that this week’s Nominations have been the scariest for her so far, though she has no regrets for any of her actions in the BBNaija House. 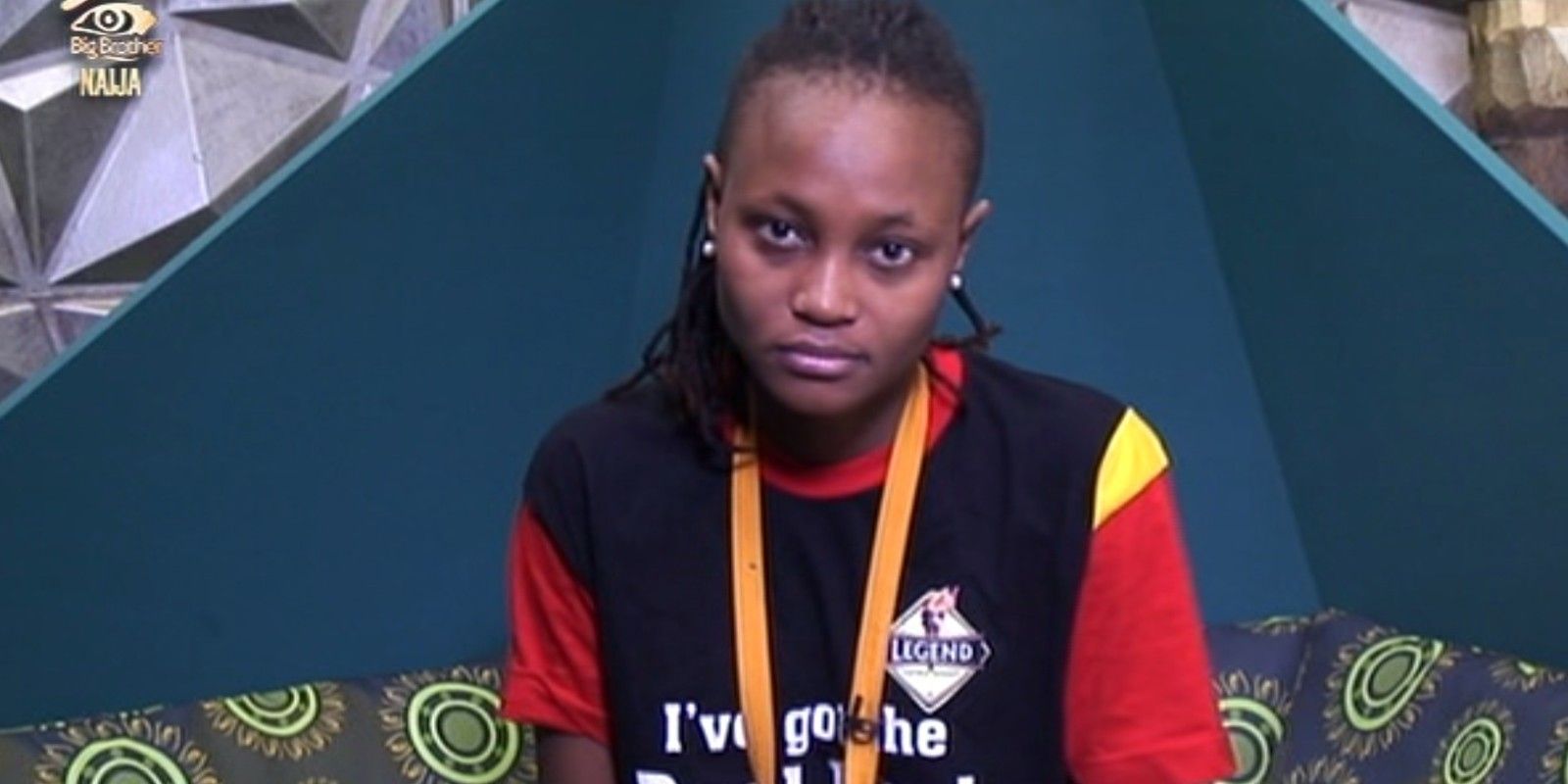 HoH Bisola said the general mood in the House is happy and she noticed that since Ebuka announced that Biggie had given them permission to conspire, the division in the House has become very visible; though she was very quick to add that being locked in the garden has given them all to just sit and talk and bond. Something they haven’t done as a House for a long while now. She told Biggie that though the five impossible missions have been very tough, she has learnt to challenge herself and face her fears head on. When asked, she told Biggie that she would have loved for them to unlock the save reward so she could have saved Marvis. She also pointed out to Biggie that she truly believed that Debie-Rise and TBoss intentionally sabotaged the missions. Her only regret in her BBNaija journey was prejudging TBoss, and if she could, she would change that. 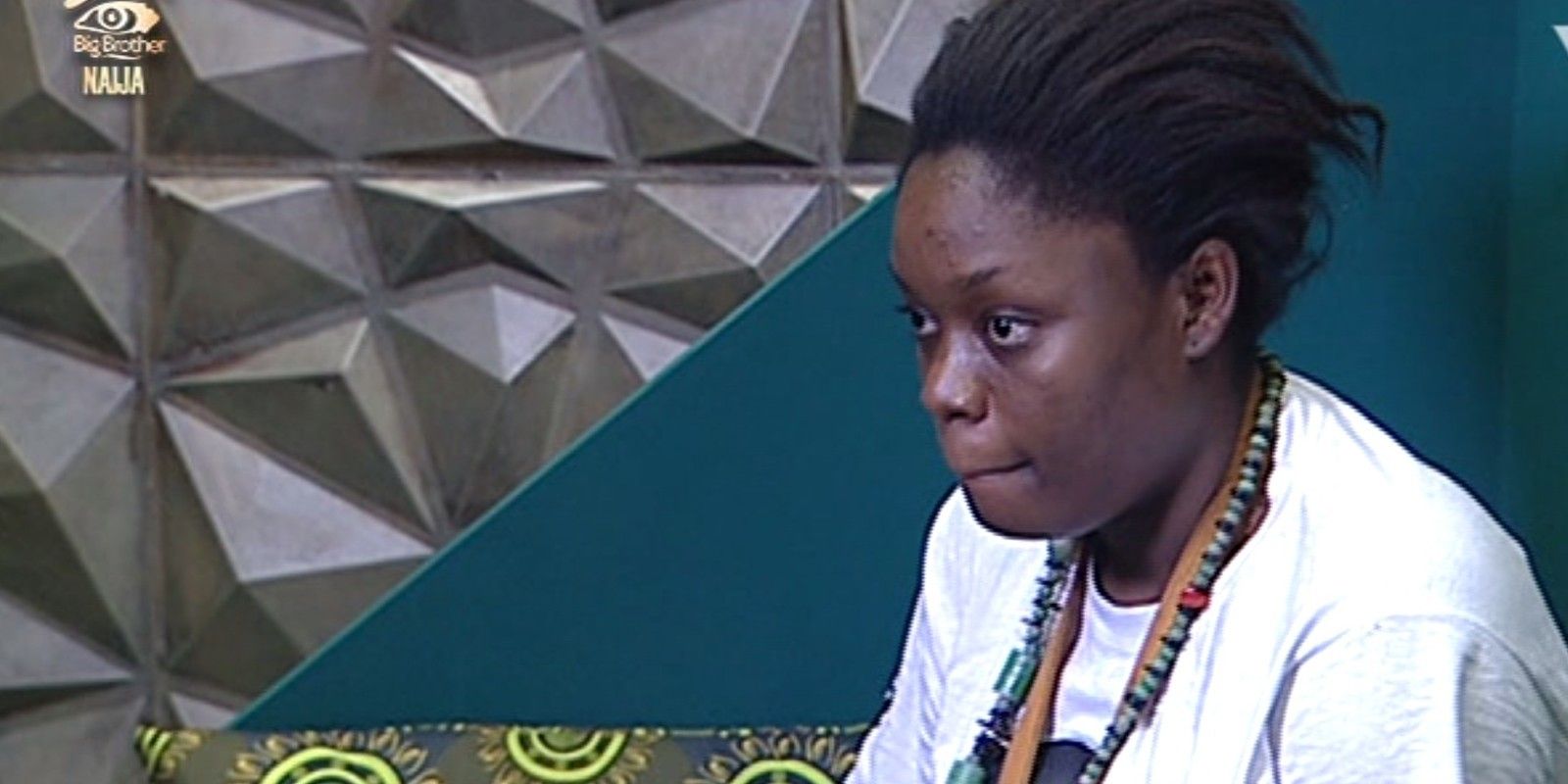 Efe told Biggie being locked in the garden was tough and uncomfortable, but it has helped them all bond as a House. He was quick to add that though he was happy that they all got a chance to bond and be friendly, he was really indifferent to the divisions in the House because he was happy and ok with his friends. Being able to conspire has broken the House into two parts, four VS two. He claimed the five impossible missions were gruelling and he was still recovering from them, though he had hoped they would unlock the save option. His only regret in his journey in the BBNaija House is that he would have loved to tone down his constant emphasis on his “being real”; as he felt his behaviour would have sold his realness much better than his words.

Bally told Biggie that though they had struggled with the heat from earlier today, the weather had since changed and it was getting cold. He enjoyed the shooting Task from earlier today and was also quick to add that being stuck in the garden has given all of them the chance to bond. He said the experience has taught them the importance of bonding and was quick to agree with Biggie that adversity and hardship are good motivators. He admitted to Biggie that though the ability to conspire had definitely shaken things up, there had always been a rift in the House. He told Biggie he wouldn’t mind attempting the five impossible missions again. Before he exited the Diary Room, he told Biggie that due to the fact that the finale was so close, he felt his cool had slipped away and he was truly scared of the outcome.

Debie-Rise told Biggie that the day has been interesting so far as all the Housemates have been forced to be in each other’s’ space. Claims to be a conversationist who enjoys being free to converse and chat to anybody and everybody around her but the conspiracy going on in the House has highlighted the different factions prevalent in the House. She claimed she misses the ability and chance to chat with some of the Housemates from the other faction but hates the fact that they always sit together. She also told Biggie that though the Tasks from yesterday were difficult and gruelling, she truly enjoyed them. She confided in Biggie that she was happy that the Housemates didn’t reach the 43 points required to unlock the save reward option as she felt that option wouldn’t benefit herself or new ally TBoss. She added before exiting the Diary Room that she wouldn’t mind attempting the five impossible missions again but only on the condition that the rewards favoured her in totality. 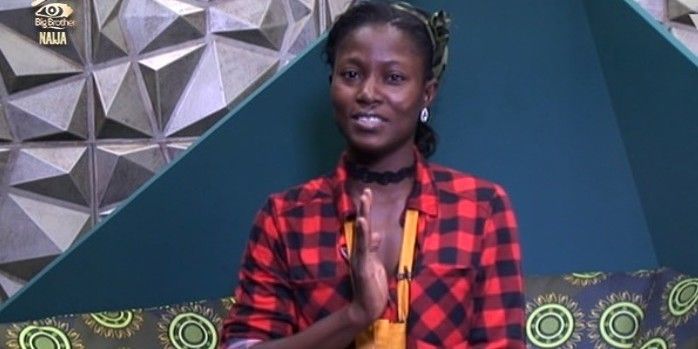 TBoss rounded up this evening’s Diary Room Session by telling Big Brother that she was tired as the weather has been very unfriendly. She told Biggie that though she enjoyed the fact that the Housemates got a chance to bond today, she would have preferred if they weren’t doing it at the mercy of the elements. She told Biggie that the divide in the House was very noticeable since Sunday and this could be a direct consequence of all the conspiracy going on in the House. She accused the members of the other group as “suck-ups” who enable each other and tolerate each other’s’ shortcomings. She was very quick to deny being a member of any click in the House when Biggie asked her the question. She also admitted to Biggie that she and Debie-Rise had conspired to sabotage the five impossible missions as they both felt that unlocking the “Save” option would not benefit them in any way. She also told Biggie that she would actually like to attempt the five impossible missions again, but wouldn’t change any of her actions in the House as she considers them all a learning curve which has made her a better person. 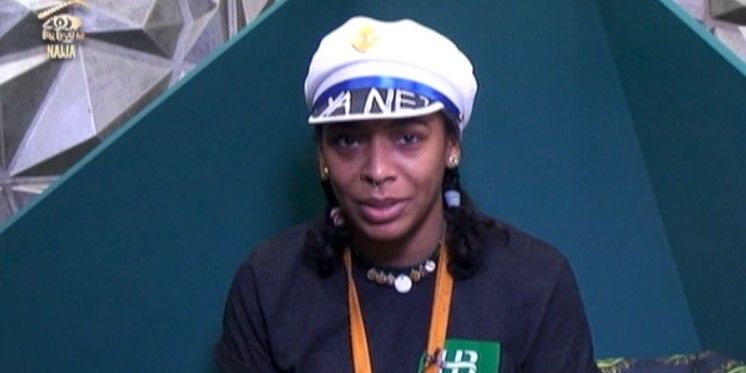