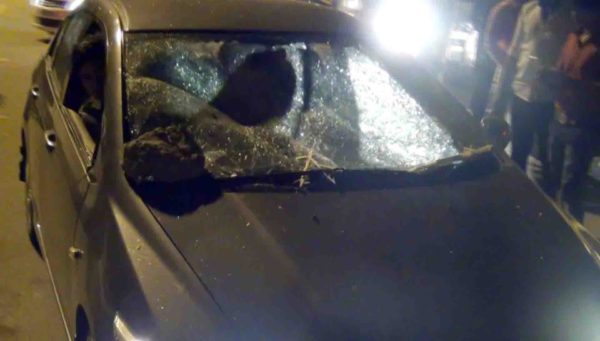 A car vandalised during the attack. Photo Credit: Hindustan Times

Four Nigerian students were on Monday mobbed by Indian locals in Greater Nodia, in the Northern state of Uttar Pradesh.

Authorities have said that some arrests have been made and investigations are ongoing.

A Nigerian student in the area has shared details of why the attack was carried out and what they are currently facing.

Dear Bella,
I am a student of Sharda University in Greater Noida India.

•On Saturday March 25th 2017, An Indian teenager of class 12 was reported dead due to cardiac arrest caused by drug overdose.

• His parents began to suspect that his Nigerian friends are the people who supplied the drugs to him.

• His Family reported to the police officers about the current situation. The police later picked up the 5 Nigerian students for questioning. After further investigations, no evidence were found to link the students to the incident, so they were released.

• On Monday 27th March 2017. In the evening, A Nigerian student from Benin went to Ansal plaza in Greater Noida India to Purchase something. On getting there he was attacked by over 200 Indians and was beaten seriously with all sorts of things. And this happened In a MALL! Was there no security???? It was really BRUTAL! He was later rescued by the police and taken to the hospital.

• Later that evening a Person from Eastern Nigeria (Igbo) was attacked in his car, by breaking of his car glass in other to penetrate and he was beaten seriously and injured.

• Ever since this incident, the African Union of India has instructed all Africans to remain indoor till further notice.
1 We are unable to go to school for lectures.
2 We are unable to buy food stuffs.
We have been indoors for the past 2 days with the fear of losing our lives. It’s totally unbearable. We are only hoping on GOD. Our lives are in danger.

Related Topics:greater Noida IndiaIndia
Up Next