Did you watch day 70 of the Big Brother Naija Reality TV show?

One good turn deserves another

Bally, Bisola and Marvis sat upstairs in the morning and made fun of Efe for some of the things he got up to after the party last night.

Apparently, Efe took one too many drinks during the triple-thriller party, which had Deejays Kentalky, Snatch and Consequence getting the Housemates dancing non-stop for about two hours.

It all started when the Housemates came back into the House after the party. Efe sat on the lounge floor, shirt off and cried, while talking to Bally, and he and Bisola tried their best to console him. Bally then supported him with his arm and took him to the bathroom before finally taking him to bed.

Bally, Bisola and Marvis had a good laugh this morning narrating to Efe some of the things he said and did last night. “I no know nothing,” Efe confessed. Bisola then went on to mimic him, sending all the others in stitches.

Just the other week, Bally took one too many drinks during the party and Efe had to help clean up after him, after he went and messed up around the House. He too heard from the other Housemates the following day, as they laughed at him while narrating that previous nights’ events to him. Marvis too has taken one too many drinks during a party a few weeks ago and was seen being helped by Efe when she sat outside and threw up.

So, the saying that “One good turn deserves another” does ring true for our fellow Housemates, as some have been there for the other, helping them through their weakest moments.

Biggie had all the items taken away from the Housemates this week returned to them. These included shoes, clothes, jewellery and a few food items.

Biggie informed the Housemates earlier this week that it being Extreme Survivor Week, a few luxuries and privileges would be taken away each day.

Biggie sent in his Ninjas to do his “dirty work” and took away a few fruits, honey, fancy shoes, jewellery and even plates of food that the Housemates had just served and looking forward to enjoying. Nothing was safe. Even Debie-Rise’s guitar almost got snatched.

Just as the Nominated Housemates finished getting their hair done this afternoon, Biggie announced that the Housemates should go outside and close the door until further notice. When they returned, they found their items inside the House. They were more than happy to get their stuff back and immediately went through the heap of things, each identifying their own things.

Some of the Housemates took their things upstairs and it was back to their weekly grocery shopping before heading back upstairs to pack their returned items back in the drawers. It was then time to pack for the Nominated Housemates, as the hours till the Live Show drew closer.

Biggie Quizzes the housemates’ other halves

One by one, Ebuka interviewed the Housemates visitors from yesterday’s meal for six. First up was Bally’s friend Omotola. Ebuka asked him what it was like in the House, he said “Yeah, the guy’s done well so far” and he told him “You’ve come this far… the world is not ready for you yet.” Bally was able to send him a message as well.

Bisola’s sister, Adunola -“It was really hard because I just wanted to cry” She told Bisola to concentrate. “Tell mommy I love her, I love you all” cried Bisola.

Debie-Rise’s friend Longrin was next on stage with Ebuka. He spoke about the “twist, it was wonderful.” “Well, you wanted a platform, and now you have it. The world is watching you.” he said. Debie-Rise said “You are always my hero.”

Efe’s brother was next and he said “I am very proud of you”, and Efe said “Happy Birthday to you.” “If you’re very proud of me, I know I am good then.” Marvis’s sister, Marian was next up on stage with Ebuka and she said “It’s like when something is lost and it has been found.

Marvis’s sister, Marian was next up on stage with Ebuka and she said “It’s like when something is lost and it has been found. Let me enter.” Marvis was very excited and sent shout-outs to her family at home. “Africa, Nigeria, Viva.”

Wendy, TBoss’ sister made an entrance and sais “Oh my God, it was so overwhelming. But I loved the whole experience.”

Monday this week saw Bisola become the new HoH in the BBNaija House and her biggest Task was performing the dreaded “save and replace” function. The four Housemates up for possible Evictions were Efe, Bally, Debie-Rise and TBoss, and HoH Bisola had to save Efe replacing him with Bally.

The Housemates got a chance to save one of the Nominated Housemates by performing five impossible missions to get enough points thereby unlocking Biggie’s rewards; but some subtle subterfuge from Debie-Rise and TBoss stoppped that ambition, thereby ensuring that all four Nominated Housemates remained on the chopping block.

As he swaggered onto the BBNaija Stage, Bally still maintained the calm demeanour he walked into the House with. He sat with Ebuka for a brief Q and A session where he talked about his future plans as he plans to engage his life outside the BBNaija House. 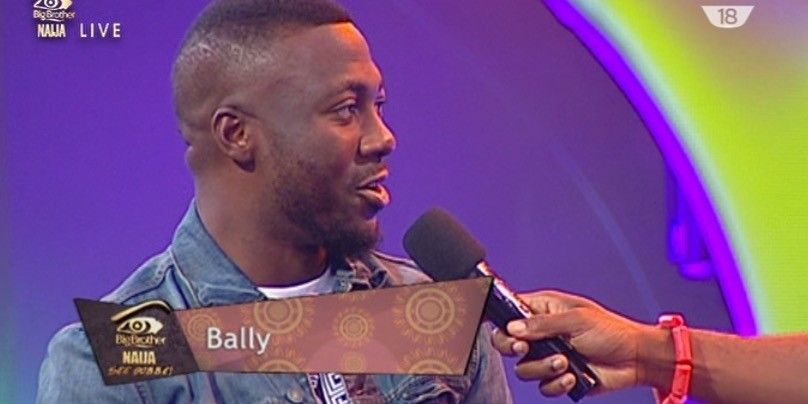 With just five Housemates left in the BBnaija House, one of them will be crowned as the winner of BBNaija 2017., who are you rooting for?

Bally has been Evicted from the #BBNaija House