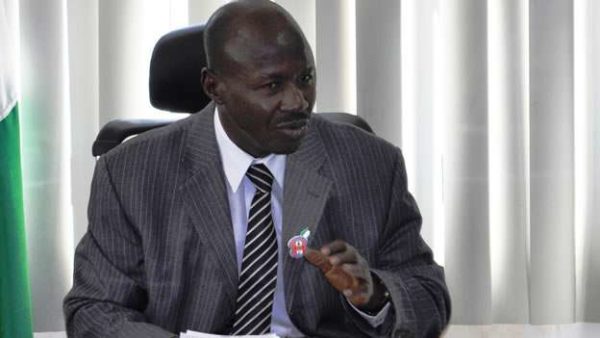 The Acting Chairman, Economic and Financial Crimes Commission (EFCC), Ibrahim Magu, on Thursday disclosed that the introduction of the whistleblower policy by the Federal Government has led to the recovery of about N17 billion by the Commission.

Magu gave this hint while presenting a paper titled “Before Corruption Kills Nigeria,” at the 62nd Award Night of the Nigeria Union of Journalists (NUJ), held at the Ladi Kwali Hall, Sheraton Hotels, Abuja.

The EFCC boss, while reiterating the Commission’s commitment to combating corruption called on the media to support the ongoing fight against corruption as that was the only way the battle can be won.

“The EFCC is committed to pursuing its statutory mandate and to rescue the Nigerian state and its people from being killed by corruption. We call on the Media and well meaning Nigerians to join us in this crusade. With the government and people of Nigeria behind the EFCC, we shall surely be victorious,” he said.

Magu also revealed that the EFCC recorded 62 convictions in the first quarter of the year.

In his remarks, the National President, NUJ, Abdulwaheed Odusile, pledged the Union’s support for the EFCC and commended the Commission for its committed efforts in combating corruption of all manners in Nigeria.

He urged the agency to continue carrying out its operation without fear or favour.

“While we commend the EFCC for its efforts in fighting economic crimes and corruption, we urge it to be diligent and painstaking in its assignment, and continue to operate without fear or favour. The media will continue to support their efforts in this regard”, Odusile pledged.

The NUJ president also condemned the rejection of Magu as the substantive chairman of the EFCC by the Senate and called for synergy between the legislature and the executive in the interest of the nation.

“We condemn the undue politicization of the confirmation of the appointment of Ibrahim Magu as chairman of the EFCC by the National Assembly. We call on the executive and the legislature to work together in the interest of the Nigeria people. The cat and mouse game in their relationship is adversely affecting the state of the nation and the welfare of the people,” Odusile said.