Donald Trump was greeted in Riyadh, the Saudi capital by King Salman on Saturday morning as the US president makes his first foreign trip despite facing uproar at home following his sacking of FBI director James Comey

He was accomplished on this visit by his wife Melania, the first lady, daughter Ivanka, an unpaid White House adviser, and her husband Jared Kushner, a key member of the Trump administration.

According to BBC News, the US has agreed and signed deals worth more than $350billion (£270billion) with Saudi Arabia and the agreement also included a $110billion arms deal. Rex Tillerson, US Secretary of State said the arms deal was aimed at countering the “malign” influence of Iran.

The first lady and Ivanka appeared without headscarves on this visit despite Trump’s criticism of then-First Lady Michelle Obama via Twitter for not doing the same in 2015.

Trump is expected to attend the Arab Islamic American Summit on Sunday and will be speaking about his “hopes of a peaceful vision of Islam”. He hopes his speech will resonate worldwide and express “a common vision of peace, progress, and prosperity”.

Recall Trump caused controversy during his campaign by calling for Muslims to be temporarily banned from entering the US over security concerns. The summit agenda is however expected to focus on combating Islamist militants and the growing regional influence of Iran.

Unlike his predecessor, Barack Obama, he is not expected to highlight human rights during his trip.

In a tweet, King Salman praised Trump, adding that he hoped his visit would strengthen their strategic co-operation. He later handed the US President Saudi Arabia’s highest civilian honour, the King Abdulaziz medal. 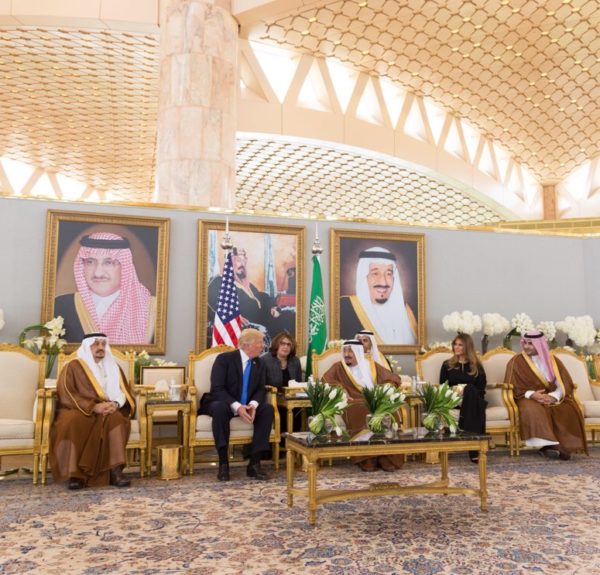