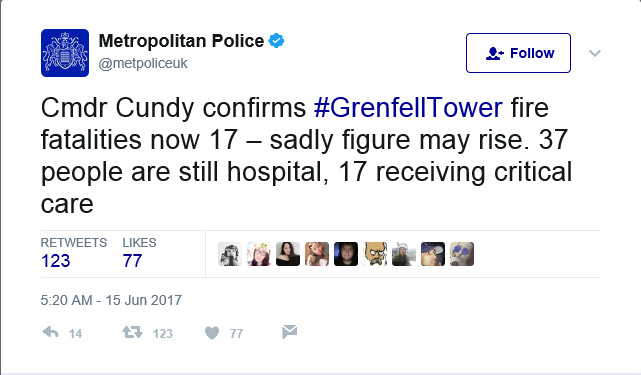 A day after the terrible Grenfell Tower fire, the Metropolitan Police has announced on Twitter that the number of fatalities has risen from the initial 6 to 17.

The official twitter account of the Metropolitan Police in the tweet has also said that the number of fatalities may again rise, with 37 people still in the hospital, 17 of them receiving critical care.

Dozens of persons are still missing and authorities say they have intensified their search. 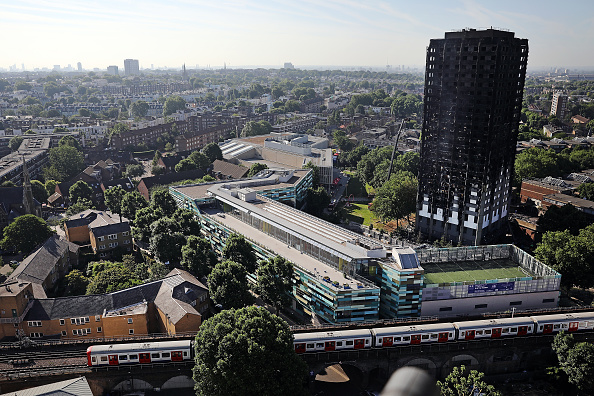 LONDON, ENGLAND – JUNE 15: A train drives past Grenfall tower, as it continues to smoulder on June 15, 2017 in London, England. At least twelve people have been confirmed dead and dozens missing after the 24 storey residential Grenfell Tower block in Latimer Road was engulfed in flames in the early hours of June 14. The number of fatalities are expected to rise. (Photo by Dan Kitwood/Getty Images)

A statement by Commander Stuart Cundy, from the Metropolitan Police Service read:

Today is about those who are waiting for news about their loved ones. Our thoughts remain with those so deeply affected by the events over the last 24 hours.

Yesterday was a very difficult day, clearly it was challenging overnight particularly for colleagues from fire. Today the work really starts in earnest to ensure that we do the appropriate recovery of everybody from those premises.

Sadly I can confirm the number of people that have died is now 17. We do believe that that number will increase.

Like we explained yesterday, our absolute priority is identifying and locating those people who are still missing. It would be wrong for me to get into numbers that I do not believe are accurate.

Our Casualty Bureau number is 0800 0961 233. If you have reported somebody missing and you now know they are safe and well please contact that number so we can identify those that we’re still trying to find.

My heart goes out to those families still trying to find their loved ones. Rest assured, please get in contact with us through the Casualty Bureau and our specialist trained officers will be in touch with you to support you through this.

It is going to take a considerable period of time, and the building needs to be made structurally safe, in order that we can do our job and investigate.

A large team of specialist detectives will be investigating under Detective Chief Inspector Matt Bonner, alongside colleagues from the fire brigade. But I reiterate again, it is going to be a lengthy process.

Again, my thanks to the community and the public for their patience which they are showing. I know this is an exceptionally difficult and challenging time.

If you have any concerns about anybody, again please contact the police Casualty Bureau.

I would like to pay tribute to all of those who have been involved in this incident. From the first responders, through to those that are supporting them, the staff at the reception centres around this area, the tremendous public support in donations, which I think is a real testament to the community spirit of Londoners.

“It’s a fight that people want to see”: Tyson Fury and Anthony Joshua Agree they Need to Fight