Forbes Africa "30 Under 30" 2017 List is Out! See the Young Entrepreneurs Doing Great Things 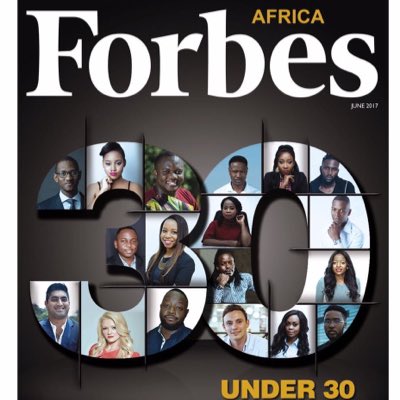 Forbes Africa has released one of the most anticipated list of 30 “of the brightest, hungriest and most successful entrepreneurs under the age of 30” in Africa.

Habona Ltd offers affordable and environmentally friendly services and energy fuels in the form of biomass briquettes and biogas waste. The company is also diversifying into the installation and operation of clean power plants, ranging from waste to energy, such as solar, biomass, hydro, and wind, as well as climate-smart farming.

In 2011, he founded Allied Insurance Brokers (AIB) in Angola and in just two years the company grew to become one of the largest Angolan property, casualty, life and medical insurance and reinsurance brokerage companies.

Young Rich Television Limited has produced several popular television shows, among them; Young Rich; Get InThe Kitchen; Stori Yangu and Our Perfect Wedding. These reality shows have aired on multiple stations across the continent, including K24, Maisha Magic East, Kwese, Trigger, Iflix and ShowMax. My Yearbook Kenya Limited, a company that produces yearbooks for schools, companies and governmental organizations.

Kiyomisandz, a cosmetic and toiletry manufacturing company based in Namibia’s capital, Windhoek. The company manufactures its own products and offers contract manufacturing services to people who want to make their own.

Verdant AgriTech is a social enterprise to support rural farmers with mobile technologies for sustainable farming and improved food production.

In 2014, Nullens was getting married. She couldn’t find a wedding planner so she founded Conquered Events. As part of her marketing strategy and love for media, Nullens also founded Conquered TV, an entertainment online TV channel. Under Africa Petroleum, her new company based in Mozambique, she has also recently invested in fuel tankers she hires to companies. She is also the founder of Celebs 4 Change, an NGO that encourages African A-listers to give their time to charity.

In February 2013, she branded her company and sold her car, borrowed money from family and invested all her initial earnings into a boutique store after quitting her job at a bank to pursue a career in the ever-growing hair extension industry.

With the £400 he saved at university, Verjee founded Studio AZ, an interior and exterior design firm based in Nairobi, in 2012. Almost five years later, Verjee claims the company turned over just shy of $500,000 last year, has 11 full-time staff and employed 75 subcontractors.

Javis International Trade Co., is a global supplier of transport and trade solutions. It employs 40 people, 27 in Tanzania and 23 in China. Elias made $9 million last year.

VIZUVLGVDS, (pronounced visual gods) is a fashion brand that focuses on contemporary African art. Onifade has released three collections since founding in 2013. All garments are handmade in his Lagos and Detroit studios. By day, Onifade is an engineer at General Motors.

In 2013, he founded Elie Technologies, which specializes in solar-powered wireless routers that act as mobile WiFi hotspots. In 2014, he started Naserwa Real Estate, a construction and rental management company. It has a portfolio of over 25 properties between Johannesburg and Kinshasa.

While working as an architect, she saved up about 70% of her salary every month to start the business. It took three and half years. In 2011, she founded In-House Interiors, an architectural, interior décor and space accessories company in Malawi. She makes interior accessories like side lamps, coffee tables and chandeliers out of recycled materials.

He taught himself to code and won $200 at a countrywide hackathon. The prize came with a tech mentoring program. In 2012, he registered Magilatech, a software development and security auditing company. Magilatech launched Tigobackup, a mobile security application performing full content backup on mobile device and antitheft commands. It has recovered more than 3,600 lost and stolen devices. Magila employs 14 people, has seven contract employees, made over $1 million last year, has app contracts with Airtel, Vsomo, Maxcom, Selcom and DayOne Softcom.

In his final year at university, he co-founded Farmerline. It provides information and technology to farmers in Ghana’s most unconnected corners. Through its Mergdata platform, it provides data analytics and through Paytime, a credit scoring and lending app, the company uses alternative data sources for farmers with no credit history.

Diva Slimming and Aesthetics Centre has two head offices, one in Sunninghill, Johannesburg and the other in Garsfontein, Pretoria. They have also opened 65 salons across South Africa in the last five years.

Secha Capital is an impact investing holding company that provides patient capital to established African SMEs via innovative strategies. Secha Capital addresses the management gap in SMEs by aligning the interests of investors with business owners through sweat equity and performance-based vesting options.

Through Sliide, a technology company with offices in Lagos and London, Munnik helps address this problem by sending targeted news, entertainment and sponsored content to the lock screen of its users’ mobile phones. Seventy percent of all advertising revenue is used to buy mobile data and airtime for users, enabling them to spend more time online for free.

Orgella Media started as an entertainment blog and has now diversified into public relations (PR), charity and property divisions.

Five years ago, Mwegelo used her personal savings and a soft loan from Africa’s youngest billionaire and FORBES AFRICA cover, Mohammed Dewji to found Kidoti Company, a lifestyle brand. It designs and manufactures synthetic hair extensions, sandals and bags. She also launched ‘Be Kidotified’ a campaign which empowers young girls by building sports facilities in public schools, and promoting education and entrepreneurship. She also launched ‘Msusi Wao’, translated ‘their hairstylist’, which connects hairdressers, financiers and customers.

There is little more satisfying than a simple solution to an annoying problem, especially when it makes money. Thomas Edison created the long-lasting lightbulb that everyone could afford; Henry Ford did the same with the family car; in South Africa, Ngwenya has invented an item to cover the gap between his pants and shoes.

Udiong watched her sister and friends search far and wide for a particular weight loss supplement. Their search came to a dead end. The supplier of that product was no longer in business. She saw an opportunity.

In 2012, Oleander House was born. She took advantage of social media advertising to promote the business.

In 2013, she resigned from her job and founded Lavie Makeup Studio. After a year, they moved to a bigger place and she employed three more people. A year and a half later, they moved to an even bigger place and added another three people. Lavie Makeup Studio has 40 to 60 brides per month during peak season and 20 to 30 brides when business is slow. Shuma has also developed her first line of products. She says they have sold 3,000 pieces since inception in 2015.

At 18, Kgatlhanye founded Rethaka, which produces recycled schoolbags that double up as solar-powered lights that children can use to study at night. The company employs 20 people, has many volunteers, and supplies its products to the likes of Standard Bank, Red Bull, PricewaterhouseCoopers and Unilever. It also exports to Namibia, Turkey, the United Kingdom and Brazil. The aim is to expand to 24 African countries.

RNDM Network is a clothing and media lifestyle company which integrates youth through fashion, music, lifestyle events and brands. Rubushe employs 10 people and hopes to keep growing the business. His love for sport led to a partnership with Enhanced Sports, a sports development and coaching company. He plans to supply quality and affordable sporting gear to underprivileged schools.

In 2016, Aboyeji left Andela, a talent accelerator that recruits and trains software developers and connects them with employers, to start Flutterwave, a provider of technology and infrastructure solutions for digital payments across Africa. The company processes over $760 million through 7.5 million transactions for merchants in partnership with financial institutions.

School Media is a company that connects brands with schools by helping clients rent advertising space in schools, in 2010. Khethi also founded Xhuma, a company that uses USSD codes to connect parents with schools. Khethi employs eight people, turns over $375,000 a year and counts Orlando Pirates and the Gauteng Department of Education among his clients. In 2011, Ngwenya founded a Going Green Project which has managed to educate 100 schools on environmental awareness and planted 4,500 trees in schools across South Africa.

Read more about the entrepreneurs HERE.