SLA's SheHive Professional Bootcamp is Coming to DC! Find Out How to Win a Weekend Pass with BellaNaija | June 22nd - 25th 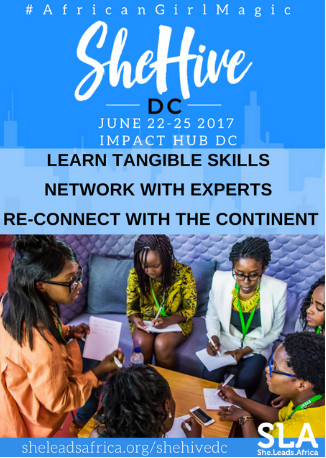 She Leads Africa brings its SheHive professional bootcamp to DC & YOU could gain free entry courtesy of BellaNaija!

#SheHiveDC is a 4-day learning and networking event which brings together young female professionals and entrepreneurs to learn new business skills, network with their peers and connect directly with potential mentors and investors.

If you’re interested in entering this ticket raffle all you have to do is;

Check out some of the amazing speakers they have lined up:

One participant described how implementing a marketing tactic she learnt at #SheHiveAccra helped her close a sales lead the very next day.

“This is not the standard overly stiff and formal conference and I love it!.” – SheHive NYC Speaker, Abby Omoruyi, founder of Catherine Marion.

Tickets for #SheHiveDC are quickly selling out and so interested participants are encouraged to secure their spots as soon as possible. Passes are still available here.

Up next on our SheHive tour is TORONTO. #SheHiveToronto kicks off July 13th – 16th, so if you’re in the area make sure you come through!

She Leads Africa is a digital media company that creates online content and offline programs to help millennial African women achieve their professional and entrepreneurial dreams. have an online community of 300,000 young women and the organization has been featured on several media outlets such as Financial Times, BBC, CNN , Forbes and CNBC Africa.