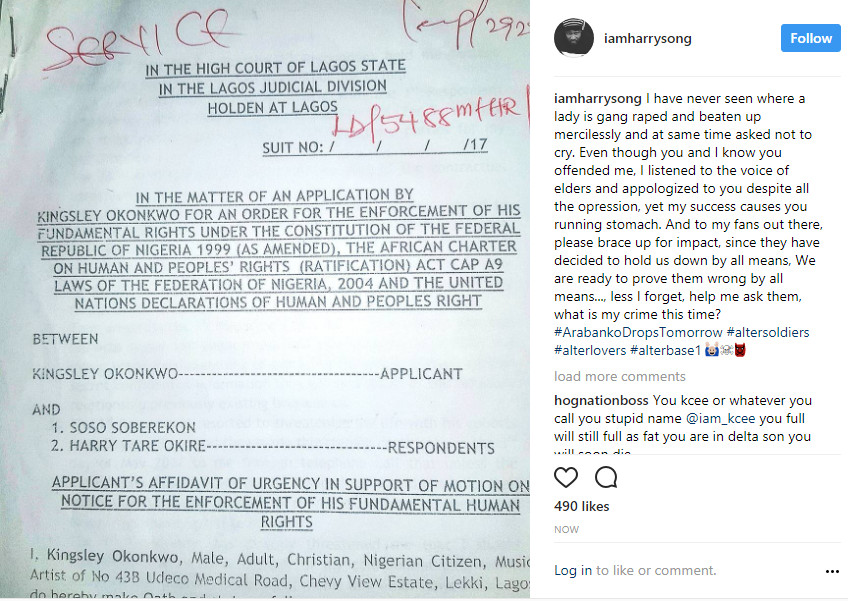 A couple of months ago, former label mates Kcee and Harrysong were entangled in a legal and social media drama following Harrysong’s exit from the Five Star music label. Their dispute was, however, publicly settled by veteran musician Daddy Showkey and Kcee seemingly gave Harrysong his blessings for his new record label.

However, in an unexpected twist, Kcee has filed new charges against Harrysong with their former manager Soso Soberekon also named as a co-respondent.

Harrysong shared a copy of the legal document on his Instagram page and captioned:

I have never seen where a lady is gang raped and beaten up mercilessly and at same time asked not to cry. Even though you and I know you offended me, I listened to the voice of elders and appologized to you despite all the opression, yet my success causes you running stomach. And to my fans out there, please brace up for impact, since they have decided to hold us down by all means, We are ready to prove them wrong by all means…, less I forget, help me ask them, what is my crime this time? #ArabankoDropsTomorrow #altersoldiers#alterlovers #alterbase1

In a chat with LIB, Harrysong added:

Kcee is yet to publicly respond.

Exclusive: 5 Things we found out during our InstaLive Chat with Omotola Jalade Ekeinde