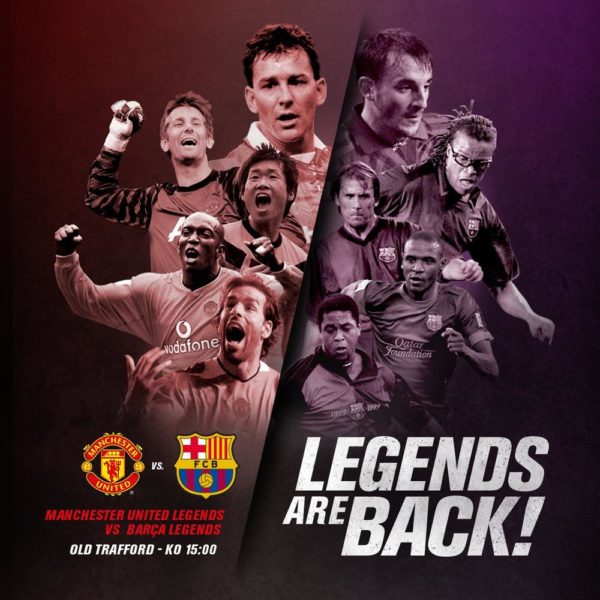 Two of the most iconic football teams in the World, Manchester United and Barcelona will honour victims of the terror attacks in their two cities prior to Saturday’s charity match between former players from the clubs at Old Trafford, Manchester.

The pre-arranged game will be preceded by a minute’s silence, while both sides will wear black armbands and will have ‘Manchester’ and ‘Barcelona’ on their backs in place of player names.

Twenty-two people were killed and 250 injured following a bomb explosion at Ariana Grande’s concert in Manchester in May before attacks in Catalonia, Barcelona earlier this month left 16 dead and over 150 injured.

“Manchester is no stranger to the devastating effects of terrorism and we can empathise with how difficult it must be for the Catalan people to recover from the recent attacks,” said former United captain Bryan Robson, the manager of the Manchester United Legends team, in a press release issued on Wednesday.

“However, as two of the most iconic teams in world sport, we can use the power of football to bring people together. We must unite to show our strength, rally around our communities and stand up together against all forms of terrorism.” He said.
Former Barca defender Albert Ferrer will manage the Barcelona Legends. He said: “The two cities have been linked by terrorism this year, so I think it’s important to show everyone that Manchester and Barcelona stand together.”

Edwin van der Sar, Wes Brown, Park Ji-Sung and Ruud van Nistelrooy will all feature for United, while Eric Abidal, Edgar Davids, Gaizka Mendieta and Patrick Kluivert are among those lining up for Barcelona.

The two teams played against each other at Camp Nou in June, with the United XI winning 3-1.