UN decries Nigerian Army's "unauthorised" search on its Base in Maiduguri 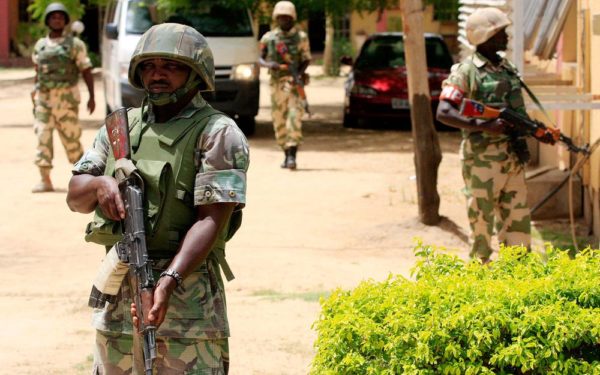 United Nations in Nigeria has reacted over what it termed the Nigerian Army’s “unauthorised” search on its base for humanitarian workers in Maiduguri.

The Nigerian Army gained access into the UN base as parts of its cordon and search operation in the Operation Lafiya Dole  against Boko Haram terrorists.

A statement signed by Samantha Newport, head of communications, for United Nations Office for the Coordination of Humanitarian Affairs (UNOCHA) read:

The Humanitarian Coordinator for Nigeria, Edward Kallon, has expressed grave concern over the unauthorized search of a United Nations base for humanitarian workers in Maiduguri, Borno State.

At circa 0500 hours today, members of the Nigerian security forces entered the UN base for humanitarian workers in Maiduguri without authorization. The security forces carried out a search of the tented camp and left the area at circa 0800 hours.

The United Nations does not have any information at this time regarding the reason or motivations for the unauthorized search. The Humanitarian Coordinator is working closely with the Government of Nigeria to resolve this issue.

“The humanitarian crisis in Nigeria’s north-east is one of the most severe in the world today,” said Mr Kallon. “I am extremely concerned that these actions could be detrimental to the critical work that is being carried out every day to support the most vulnerable in the region and I call upon the Government of Nigeria to provide clarification.

The United Nations and more than 50 non-governmental humanitarian organisations are working in support of the Government of Nigeria to provide aid, including food, safe water and medicine, to some 6.9 million people in need in the northeast

Reacting to the development, a statement by Lt.-Col. Samuel Kingsley, the spokesperson, 7 Division of the Nigerian Army, said that it received intelligence that high profile Boko Haram members had infiltrated the area, hence the cordon and search operation on about 30 houses, including the UN base.

As part of ongoing counter insurgency operations, the Theatre Command Operation LAFIYA DOLE has been conducting several clearance as well as cordon and search operations in urban and rural areas within the Theatre. The clearance operations effort has been yielding several successes.

It has forced the Boko Haram Terrorists (BHTs) to change tactics and resort to employment of suicide bombers to target military locations and the populace. This necessitated the need to intensify Cordon and Search in Maiduguri metropolis and environment.

In the last one week cordon and search operations were conducted in Jiddari –Polo, Muna Garage, Jakana amongst several other areas. On 10th August 2017, Theatre Command received information from one of its credible sources that some high value BHT suspects had infiltrated into Pompomari Bye Pass.

It therefore became expedient to take preemptive action by combing the general area through a cordon and search operations. The operation was successfully conducted as over 30 houses were searched.

One of such included a property which was said to be occupied by United Nations Staff, although the property did not carry a UN designation.

On the whole, operation in the general area was successfully concluded but no arrest was made because the suspects were not found.

The command wishes to assure the general public that these operations are being conducted to safeguard lives and properties but not targeted at any individual or group.

The general public is cautioned to avoid peddling rumours which may cause disaffection and to remain law abiding.

All you Need to Know About #TaylorSwiftTrial

I will take a bullet for #ResumeOrResign Protesters – Charly Boy