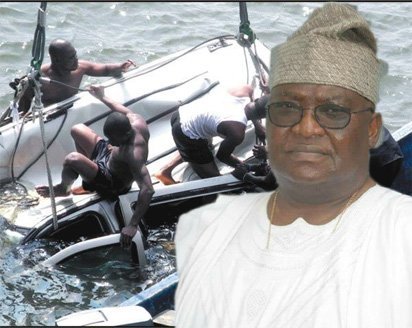 The bodies of Air Vice Marshal Olufunsho Martins and his driver have been recovered after the vehicle they were driving in plunged into the lagoon.

According to Vanguard, the AVM’s vehicle was on Saturday in a lone accident, somersaulting before plunging into the Lagos lagoon.

The vehicle, a Ford Explorer SUV, was removed from the lagoon in the early hours of Sunday, with the bodies of the deceased – AVM Martins and his driver.

The deceased was reportedly heading home after attending the birthday party of one of his church members held on Saturday.

Sympathizers at his home in Park View Estate lamented the AVM’s death, saying he was too amiable to have passed.

Jimoh, a senior military officer who spoke to Vanguard, said the AVM “did not deserve to die this way.” He said:

We were told that he was on his way home when the incident happened yesterday night (Saturday).

We were members of the 8th Regular Course of the NDA. He rose from the rank of 2nd Lt (NAF was still using Army ranks when he was commissioned to AVM). He held several appointments within the NAF. He was the commandant, Rehab Oshodi and AOL HQ NAF.

A cousin of AVM Olufunsho Martins who also spoke to Vanguard also expressed sadness. He said:

Its so sad. His death has plunged us into sorrow. He died last night.

Our prayer is that the good Lord grants repose to the soul of the departed and give succour to the bereaved. He gives and takes.

We were informed that officials of LASEMA recovered his body and that of his driver around 2:30am. Parts of the vehicle were compressed, indicating the impact of the collision.