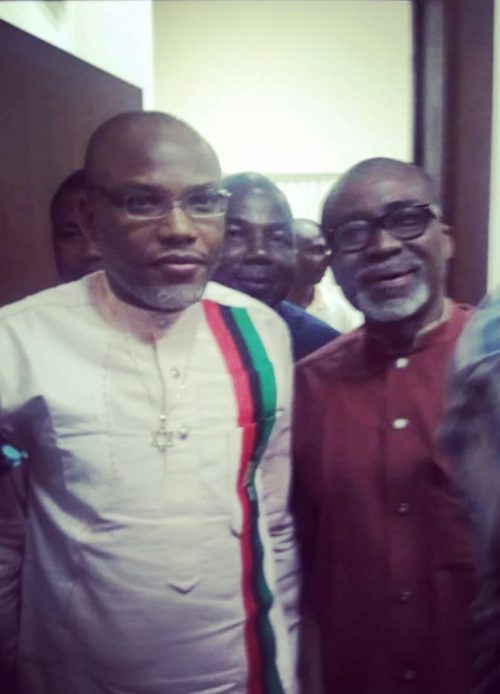 Nnamdi Kanu, leader of the Indigenous People of Biafra (IPOB), was absent from court during his trial for alleged treason.

Kanu whereabouts have been keenly contested between the Nigerian Military and IPOB in the past few weeks.

IPOB has accused the military of abducting him after raiding his house on the 11th of September, a claim the military has repeatedly denied.

IPOB, on Tuesday, asked that the Federal Government produce Kanu, else there will be a confrontation.

Shuabu Labaran, counsel for the prosecution, asked that the court revoke his bail due to his absence, and arrest his sureties, Premium Times reports.

Nyako said: “You know I don’t like drama. What Mr. Labaran has just said is that the first defendant is not here and because of that I should revoke his bail. Now it’s my turn to ask you: where is your defendant?”

Replying, Ejiofor said he had no idea if his client was dead or alive.

Senator Eyinaya Abaribe who stood as a surety for Kanu also requested that he be relieved of the role.

He asked that the N100 million bond paid as a part of Kanu’s bail condition be refunded. He said:

Since the stated visit of the Nigerian Army to the residence of the first defendant from September 11, 2017, the second respondent in this suit (Mr. Kanu) has not been seen in public, neither has he been reported as making any statement on any issue.”

Since September 20, the reports have been that the federal government has proscribed IPOB, and declared it a terrorist organization.

The applicant lacks capacity to produce the person stated by the first respondent (government) as a terrorist or a person who is of interest to the applicant.