Fela and the Kalakuta Queens is Back! Thanks to MTN Foundation & Bolanle Austen-Peters Production 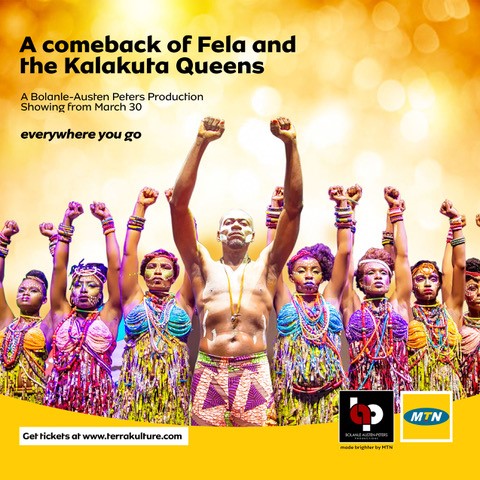 Another run of the critically acclaimed hit musical, Fela and the Kalakuta Queens is back courtesy of the MTN Foundation and Bolanle Austen-Peters Production (BAP). This stage production has been dubbed by many lovers of theatrical productions as one of the most iconic musical plays ever produced in Nigeria. The comeback is in order to satisfy the yearnings of the general public who demanded to see the story of the late music maestro and his queens enacted on stage again after its sold-out debut in December 2017 and January 2018.

Executive Secretary, MTN Foundation Nonny Ugboma, says that harnessing the intrinsic potential in arts and culture would help in giving young talented Nigerians a means of livelihood, also help in promoting the country’s rich culture and diversity. The amazing musical showpiece mirrors the life of Fela Anikulapo-Kuti the musician, the activist and the role the Kalakuta Queens, who were his wives, played in his life and musical journey. A total of 20 shows have been lined up in March and April to tell the story.

It’s Another Season of Woman of Steel! Stay Glued to Telemundo to Watch the Drama unfold