From Survivor to Advocate! #BellaNaijaWCW Oluwaseun Ayodeji Osowobi wants Everyone to "Stand to End Rape" 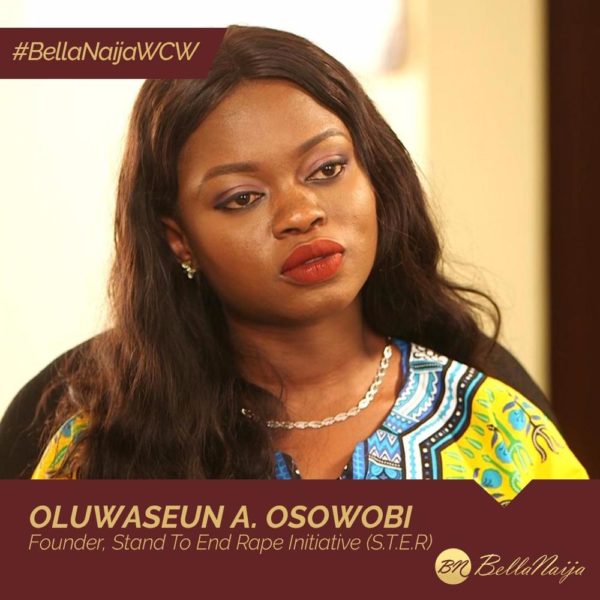 Sexual and gender based violence are increasingly being reported, thanks to social media and how it has made information spread very easily and quickly. Movements like #TimesUp, #MeToo are encouraging victims to speak up, and individuals like our #BellaNaijaWCW today Oluwaseun Ayodeji Osowobi. She has created an organisation on the back of her personal experiences to fight against sexual crimes, as well as facilitate support, healing and justice for victims.

Osowobi had a devastating experience during her mandatory National Youth Service. While working for the Independent National Electoral Commission (INEC) in the 2011 general elections, she was raped by one of the youths in the village where she was serving.

What’s more devastating? She was raped because she refused to accept bribe to register underage voters, so as to boost the votes of an aspirant. According to Osowobi, “the village and community members…. set a trap for (her) to be raped by one of the village boys.”

She didn’t know what to do after this incident. Her housemate administered first aid to her after seeing her bleeding, and then, they didn’t know what next to do. Ayodeji went to the police station to report the case, and what happened next, she described as her “waterloo”. “One of the officials had said they needed to ‘confirm’ my claim of being raped. He literally said they had to check me. I felt humiliated. The problems victims generally face dawned on me,” she told Guardian in 2017.

Not wanting to experience further emotional degradation, Ayodeji let it go and proceeded to take care of herself, by herself and her immediate family and friends. Later on, Osowobi decided to bridge the gap between victims of rape and the services, laws and support they require following her mother’s counsel. That was how the Stand to End Rape (S.T.E.R) Initiative was born.

S.T.E.R is “a youth-led Not-for-Profit Organization advocating against sexual violence, providing prevention mechanisms and supporting survivors with psychosocial services.” The platform, founded in 2013 by Osowobi, advocates for rape survivors who can’t speak about their ordeal due to stigmatization by enlightening the community on the need to end rape and victim blaming.

The platform uses social media heavily to carry out its enlightenment campaigns as well as providing initial support to victims. Over 250 victims have received medical, post-traumatic and legal aid, as well as other empowerment assistance.

Osowobi is a graduate of Development Studies from Ahmadu Bello University (ABU), Zaria, and holds a Master’s Degree in International Relations with specialisation in Gender Studies from Swansea University, United Kingdom.

Since 2015, Osowobi has been a youth advisory group executive member with the United Nations Population Fund (UNFPA), and assumed the position of a project assistant with the International Organisation for Migration (IOM) Nigeria in January 2018.

She is a 2017 Queens Young Leaders Award Highly-Commended Runner-Up and a 2015 fellow of the Vital Voices Women Lead Fellowship.