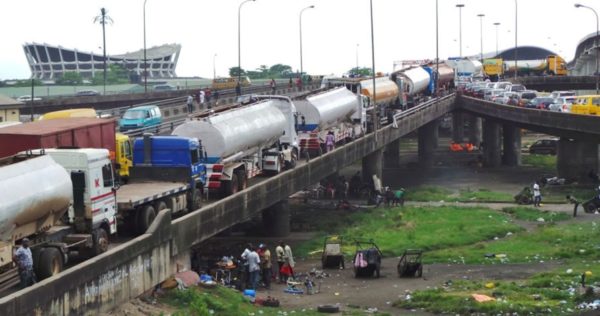 Photo by: The Nation

Truck drivers parked on bridges across Lagos State have been ordered to vacate them in 48 hours, The Nation reports.

The order was given at a stakeholders meeting at the Apapa headquarters of the Western Naval Command (WNC).

Rear Admiral Abbah, the Flag Officer Commanding of the WNC, complained that the bridges cannot take the weight of these trucks parked permanently on them.

The trucks constitute an easy target for terrorists, he said, and have caused the loss of several lives. He said:

We cannot continue like this. This gridlock from Apapa to Mile Two and then from the stadium up to Eko Bridge does not do anyone good.

We are going through trying times in the country and the mere presence of these tankers and trucks on our bridges constitute easy targets for terrorists. No one knows where and when terrorists strike from. Their actions cannot be predicted and that is the more reason why we cannot continue to have these vehicles parked on the bridges for two to three weeks.

The navy deployed its helicopters on Monday to take aerial footages of the situation and I can tell you it is very worrisome. So many people have lost their lives as a result of this traffic. These bridges were constructed in the early the 1970s to carry moving weights not for static vehicles. The bridges have since carried more than the weight they were built for. Parking trucks on them could lead to collapse because they weaken the bridges.

We have heard from NUPENG and I use this opportunity to appeal to the leaders here to call their men to order. We do not want to see tankers and trucks parked on the bridges anymore. They have requested for 48 hours to start phasing off their trucks from the bridges and we have obliged.

Women want to be Equal but can they pay for their own Cab?