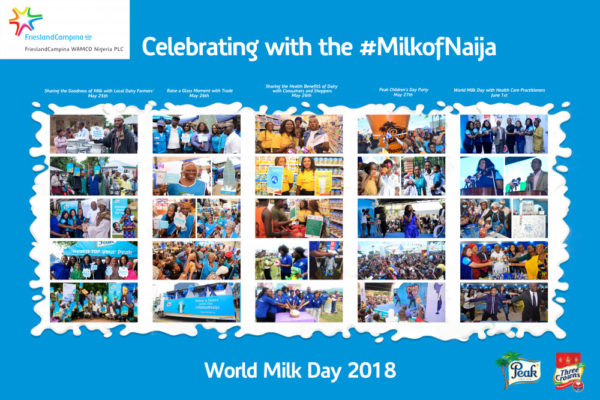 In commemoration of 2018 World Milk Day, Nigeria’s leading dairy nutrition company, FrieslandCampina WAMCO Nigeria PLC., makers of Peak and Three Crowns Milk, Peak 456 and Peak Choco have reinforced its brand relevance among consumers and strategic stakeholders with an array of activities. In what has been described as a show-stopping initiative, this year’s theme tagged ‘Raise a Glass’ is meant to encourage people to appreciate the nutritious benefits of milk, this was done in partnership with the Nutrition Society of Nigeria (NSN)

FrieslandCampina WAMCO started the 2018 edition of World Milk Day activities on May 25th with a visit to their local dairy farmers at Iseyin, Oyo state. They have continued to support over 3,500 local dairy farmers (including women) to expand their investment opportunities as the milk collected from the dairy farmers is used in the local manufacturing of Peak evaporated milk. The visit was meant to appreciate the effort of farmers as being the starting point in milk production process. During the visit, the farmers showed the FCW Corporates the process they go through in milking cows and preserving the milk. It is sent for further production into evaporated and powdered milk. Experts from the NSN also enlightened the farmers on the nutritional benefits of drinking milk.

Similarly, FrieslandCampina embarked on a trade visit to various open markets, supermarkets and sales outlets across the country. This was done in collaboration with the Nigeria Heart Foundation and Nutrition Society of Nigeria whose officials enlightened shoppers on the nutritious & health benefits of milk drinking. Customers were also given the opportunity to win various prizes.

The children were not left out in the fun as over two thousand children and their parents took part in the Peak Children’s Day Party held on May 27 at the JJT Park, Alausa Lagos. The children played different games and were informed of the importance of drinking milk by officials of Nutrition Society of Nigeria. They also participated in PeCaDoMo junior where they were opened to cooking at an early age with various recipes that can be combined with milk. The highpoint of the party was the unveiling of the largest Choco Cup which was about 10ft tall to the excitement of the crowd. During the event, the brand manager of Peak Chocolate, Gloria Jacobs stated that “with this year’s event, we wanted to show something spectacular and that has never been done before to the Nigerian Children and particularly impress on them the importance of nutrition by taking Peak Chocolate and Peak 456 daily for optimal growth and brain development because both contain adequate vitamins and essential nutrients”

In the course of the event, there was a fitness moment encouraging keeping an overall healthy lifestyle. The feedback was very positive as guests were full of encomiums for FrieslandCampina. In addition to the World Milk Day celebration, FrieslandCampina organized PeCaDoMo Engagement where the Health Care Practitioners showed different ways of creating various delicacies using peak milk. The World Milk Day which holds annually on June 1st is a day set aside by the Food and Agricultural Organization (FAO) to celebrate the important contributions of the dairy sector to sustainability, economic development and livelihood and nutrition.

Rihanna stuns at Stance for the Clara Lionel Foundation Event ?