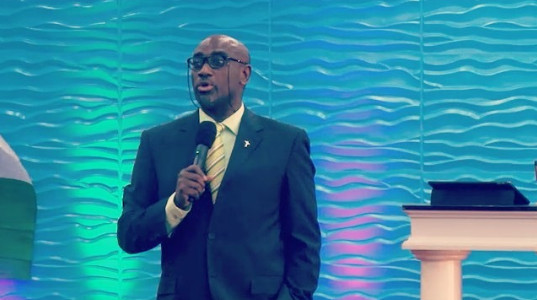 Senior Pastor of Foundation of Truth Assembly (FOTA) Reverend Yomi Kasali has a few words for a female preacher who he says is “fleecing members. Asking for $1000”.

Although Kasali didn’t mention names in his comments, the message is possibly for Reverend Funke Adejumo who has come under fire (and also received immense support) in recent times after several videos of her asking different congregations to donate money – sometimes in thousands of dollars and euros – went viral.

Kasali, who posted a clip from one of his sermons on Instagram, said:

In today’s world, we have Christians who have had their conscience seared to the point that the line between good and evil has been blurred. A Christian without a conscience is not a Christian and such person is not under the authority of the Holy Spirit. #conscience #christian#killingofconscience

Here’s what the clergy said in the clip:

Christians no longer have conscience. Preachers have dead consciences. I watched the video of a preacher fleecing members. Asking for a thousand dollars! And I said ‘does this woman have a conscience?’ You know you are lying. The bible says ‘speaking lies in hypocrisy… have their consciences seared.’

She knows what I’m saying is right. If she has ear let her hear, Judgement is coming on her very soon. How can you be lying to members in the name of God? We have preachers that are lying on the pulpit daily just to take your money. You come to them saying ‘God told me I should take money from you… sow a seed’. Which seed are you sowing? Where is it in the bible? Where?!

You cannot be a Christian, without a good conscience. The moment you take away your conscience, you’re gone yourself!