#StandingWithCameroon: Let's Talk About the Silent Civil War In Cameroon 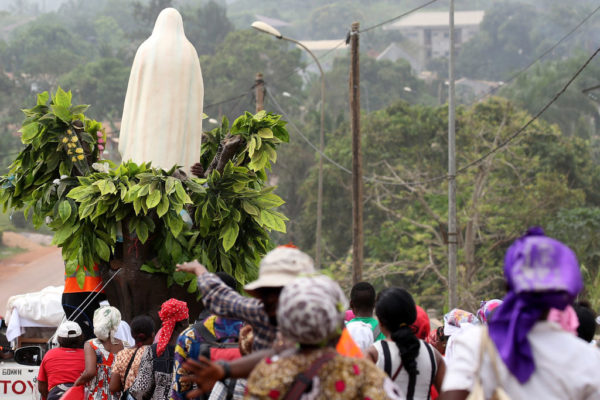 There have been reports, as well as video evidence, of state-sanctioned torture, killings, and destruction of private property.

It’s unclear exactly when the killings started. What’s clear is it’s been going on for a while.

A report by Reuters attempts to explain the origin of things: the small English-speaking part of Cameroon, feeling increasingly marginalised by the bigger French-speaking part, sought to secede entirely. They named their new country “Ambazonia.”

They’ve printed passports, composed a national anthem and even designed a flag and national currency. And there have been protests.

But with the protests have been violence.

Reports first filtered through in 2016 that protesters were shot at and killed, with hundreds arrested, and witnesses have claimed there has been gunfire from helicopters, too. Their internet was also cut off for 3 months.

The separatists, too, have been accused of killing what now amounts to hundreds of security forces.

BBC collated videos found on the internet of people being tortured and entire villages being burned and confirmed they were indeed scenes from the English-speaking part of Cameroon.

The Cameroonian military has consistently refuted the killing, describing an Amnesty International report as “stuffed with crude lies,” and “part of a strategy of harassment and destabilisation of our country.”

So far, according to the UN Office for the Coordination of Humanitarian Affairs, more than 160,000 have been displaced, with another 21,000 said to have crossed over to Nigeria as refugees.

And because only little has been said about all of these in the media, all it amounts to is a silent civil war.

Of course, that this is going on and almost nothing is being said and done about it, in the 21st century no less, is both incredible and unacceptable.

Because of this, BellaNaija would like to hear from people who either have personally experienced the killings, torture and destruction of properties, or have friends or relatives who do.

We want you to share your story, bring to the fore this 21st-century horror.

We know not everyone can write, and that’s fine. All you have to do is send a mail to features(at)bellanaija(dot)com. Don’t worry about syntax or structure or even grammar. All we want is your story: raw and true.

Have the email subject read: I Stand With Cameroon.

Let’s get the international community to do something, stop the killings.