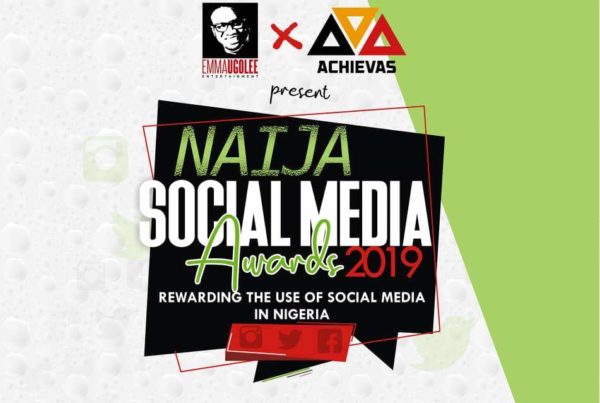 Entertainment in Nigeria has left the realm of occasional events at rented spaces or timed programmes on Radio and TV. Entertainment today is now on the go. One on One, Star and Fan, 24/7. With a window for instant feedback from the consuming audience.

Welcome to the age of Social Media. Over 20 million Nigerians are actively on this platform and a handful has taken it upon themselves to use it to inform and entertain Nigerians all over the world every single day without let up. The time has come to give honor to whom it is due. To say thank you to those who bring a little sunshine into every day for us all.

An annual event that would honor winners from 36 categories as polled from their personalities and activities on social media. All nominees must be active on social media. The universe for the NSMA covers the entire virtual world of Twitter, Instagram, Facebook, Blogs and other entertainment sites.

While the nominees shall be selected by a respectable committee working with professional guidelines, the selection of winners from the nominated would lie strictly on the voting fan base. Every owner of a social media handle or account is an automatic eligible participant.

Collation of the final results and presentation of awards shall be unveiled on a magical award night with performances from social media sensations from the world of comedy and music. There is more to the NSMA awards says the organizers, Emma Ugolee and Paul Cole Chori, who have been working on building the concept for over a year.

“We wanted an award ceremony that left every participant satisfied after the show. Voters, Nominees, and Winners. No post-event debates. So the NSMA is built on remarkable transparency and an unprecedented reward system where no nominee goes home empty-handed and the voters get thrilled with surprises.

A sample of some of the 36 categories are;

Twenty-six more categories, full nomination lists and the details on the When? Where? and How? are coming soon in the event that would be a game changer.

Brace yourselves as finally, “Your Likes Count”.