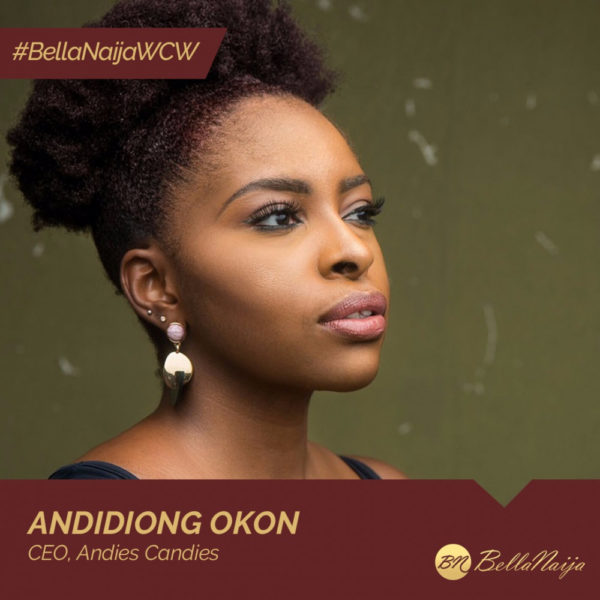 Young hands and brains must be employed and empowered if Nigeria and Africa at large will be successful in building its future.

Our #BellaNaijaWCW this week Andidiong Okon is an entrepreneur, a civic society executive, and a social justice advocate.

Andidiong is a graduate in Economics from Covenant University and has a masters degree in International Development from the University of Bath where she focused on the role of civil society in developing countries.

Andidiong started her career in investment banking and financial advisory, working at BGL Plc and Microsoft.

During her time in investment banking, she became a founding member of Team Member, an advocacy group that works to hold public officers accountable for good quality health service delivery for Nigerians through its “Sign Up for Change” initiative.

Andidiong ventured into entrepreneurship circa 2013 after her friend suggested she does something about her love for candies. Another friend gave her some money and she registered her company – Andies Candies – on her 25th birthday in 2013.

She wanted to sell candy as not just for children, but for adults. She started the business with support from friends and family.

She had applied for the federal government’s YouWiN grant and a few months into launching the business, she was awarded the grant.

With this, she was able to move the business from underneath her parent’s staircase to its first store in Wuse 2 and back office in Jabi, Abuja.

Andies Candies specialises in the production and retail of sweet treats and Andidiong is working to make the brand the foremost confectionery company in the country.

Andidiong is a Project Manager at Code for Africa, a network of indigenous civic technology and open data laboratories, with affiliate members in 10 African countries and funded projects in a further 12 countries. She works with the Code for Nigeria team.

Code for Africa describes itself as a people-driven movement that aims to empower active citizenry and strengthen civic watchdogs to help government shape and improve its services to citizens.

She also works with the Ayahay Foundation to advocate for the education of rural children in Nigeria.

Andidiong is a 2016 Fellow of the Mandela Washington Fellowship where she focused on Business and Entrepreneurship and was part of a 6-week intensive business program at Virginia Commonwealth University.