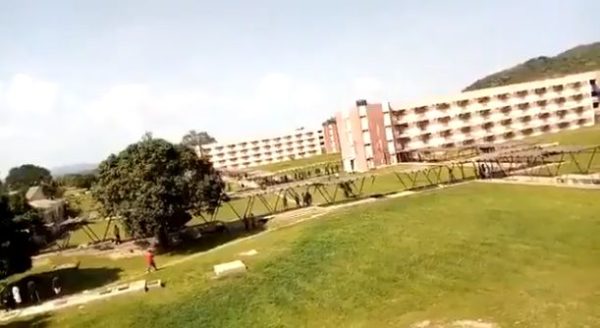 An unknown number of people have been feared dead after violence erupted in Jos, Plateau State.

The violence, according to ThisDay, started in Tina Junction area of Jos after an Apostolic Church was allegedly attacked by youths believed to be from the Hausa Community during their Sunday service.

Daily Trust also reports that a motorcyclist was allegedly killed by thugs around “Cele Bridge”, near Tina Junction.

There have also been reports of a clash between students around a village hostel and a community near Farin Gada. Photos, videos and stories shared on social media also claim students have been shot at and killed by security agents.

The situation in Jos is really getting out of hand!!! @segalink @AMADICHIMA student hostel being attacked!!! pic.twitter.com/8vuJjzGYQS

A friend and military officer today, escaped the evil ones perpetrating violence today in Jos, for how long shall we continue like this (15years) pic.twitter.com/GZrUpn0hDS

A student, Janet Bako, who spoke to Daily Trust, said:

Today has been one of those unfortunate moments. We have had a lot of unrests in a cross section of the town. I was with the youths in Jos North LGA yesterday –  Laranto in specific, and we had heart-warming discussions and interactions.

But in a situation like this, certainly, some miscreants and some criminals might want to seize some undue advantage or opportunity to unleash mayhem to innocent citizens and this is what we are condemning since my mandate in this Plateau State is the restoration of peace, law and order and total civility within the society.

May I appeal to every good citizen of the state living both here in the state and outside the state, to urge the youth, the misguided ones to sheathe their swords and live in peace with one another.

I am sure that every apparatus of government is working assiduously hard to ensure that normalcy returns and every person goes about his normal duties.

There is no need for us to lift up arms against one another. Every conflict in this world has a solution and the solution is understanding and perseverance. We should be our brother’s keepers and our sister’s keepers. There should be peaceful co-existence.