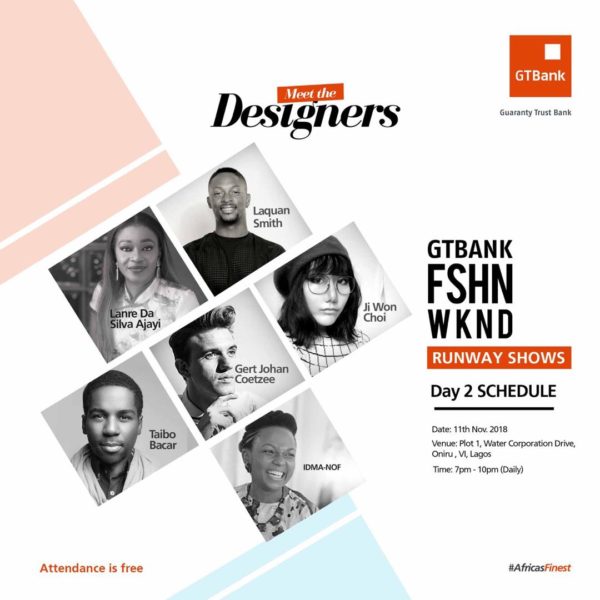 Hard work, creativity and passion, punctuated by the clicking of heels, define a single moment on the GTBank Fashion Weekend Runway Show. On Saturday, November 10th, and Sunday, November 11th, 2018, thousands of guests will be entertained by this single moment as indigenous and internationally renowned designers showcase their brands on the runway.

These are the designers slated for Day 2 of the 2018 GTBank Fashion Weekend:

Lanre da Silva is one of Nigeria’s leading high-fashion couturiers. She started the LDA brand in 2005, since then, her work has gained international recognition, featuring in top magazines like Vogue. She was the first African designer to have her label stocked at the Dolce & Gabbana Concept Store in the heart of Milan, Italy, the hub of international fashion.

Taibo Bacar is the founder of Taibo Bacar, a fashion brand known for its uniqueness and strong attachment to the African heritage. He launched his self-named fashion label in 2008 in Mozambique which focused on creating clothes for the delicate, classic & feminine woman. The label grew quickly and was named Emerging Designer of the Year at Mercedes Benz Fashion Week Africa in 2012. It was also the first African brand to showcase at the Milan Fashion Week.

The IDMA-NOF womenswear brand was founded in 2017. The brand blends art, fashion and craftsmanship in exciting ways – this blend coincides with its aesthetic which is very bold and strongly influenced by the colourful African heritage.

Gert-Johan Coetzee is a South African fashion designer whose designs are made up of elaborately designed couture and ready-to-wear gowns. Gert-Johan Coetzee designs have gotten international acclaim and have been worn by the likes of Kelly Rowland and Kourtney Kardashian.

JI WON CHOI is a graduate of Parsons School of Design and the brain behind the self-named fashion brand, JI WON CHOI.  Her work revolves around human cultures and using design to promote positive change within societies. Since the debut of her thesis collection, EXCESSIVISM, in 2017, she has enjoyed great success: her work has been featured in various international magazines, and exclusive interviews have been featured on Vogue Italia, Vogue USA, LOVE, Modern Weekly China, and Bullett Media.

LaQuan Smith has quickly become a household name in fashion. He is a favourite amongst the world’s most trending superstars like Rihanna, Kendall Jenner and Beyonce. Born in Queens, New York – the designer started from humble beginnings, building his brand from the ground up. In 2010, a few years after an internship with Vogue Editor-at-Large, Andre Leon Talley – the young designer debuted his first collection at New York Fashion Week.

Simi arrives in London ahead of her Concert at the O2