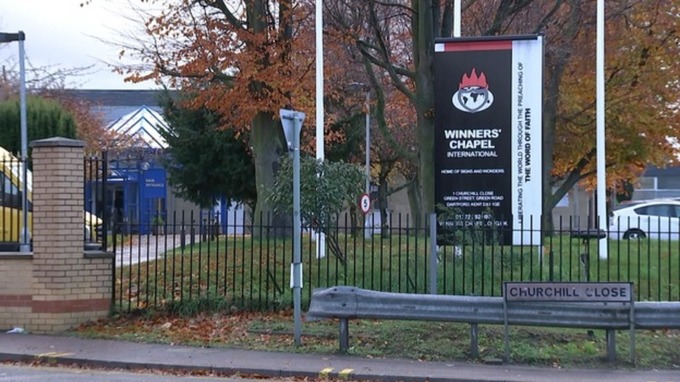 A reporter with Britain’s ITV went undercover as part of an investigation into alleged gay conversion therapy carried out by several organisations, including religious ones.

In this report, the reporter, armed with a hidden camera, revealed to Pastor Gbenga Samuel of Winners’ Chapel in Dartford that he was gay, and in less than an hour two pastors, including Pastor Samuel, were praying on him.

“Let there be a release. the fire come upon him!” the pastors say.

At a pre-arranged meeting, Pastor Samuel told the reporter that “something shifted” in the process of his life, “which God can fix”.

Pastor Samuel also told the reporter that society may try to convince him that being gay is right, but all that is part of a “carefully scripted” agenda by Satan.

He also compared it with the way Germans were brainwashed by Nazi propaganda.

The reporter then underwent a prayer session to fill him with the Holy Spirit and distance him from homosexuality.

Reacting to the investigation, The Evangelical Alliance, which represents thousands of Pentecostal churches in Britain, said:

“Churches and their leaders must be held accountable when they misuse their influence over others. Winners’ Chapel International is not a member of the Evangelical Alliance and we would have serious concerns regarding the behaviour depicted.”

Responding to the filming, Winners’ Chapel said it will conduct an internal investigation.

The church is open to all people, and take “inclusion and diversity very seriously,” it said.

The statement added that the church complies with the law and follow the “biblical teachings of love for everyone regardless of their belief, gender, background or sexual orientation”.

REVEALED: The church that claims God can 'fix' gay people. Winners Chapel tells our reporter:
– Satan is controlling parts of him
– God can change him
– Society's acceptance of gay people is like Nazi propaganda
– Prayer can help

First ever broadcast of conversion therapy in UK. pic.twitter.com/yKbFuWKS8Z

Here’s what the reporter had to say about the experience:

From the first moment I mentioned my sexuality, presenting as a gay man to pastors at Winners’ in Dartford, their attitude was immediate and obvious.

They told me that I didn’t need to feel guilty about what I said I was, but that wasn’t in any way reassuring.

To them, it was clear that being gay was both a sin, and in some sense a sickness that is both mental and spiritual.

They described it as demonically-influenced, and so my lack of guilt was because I didn’t necessarily cause it.

I went through hours of counselling and prayer sessions, all directed at ridding me of my homosexuality.

Sometimes the prayers in themselves seemed harmless, such as for God to direct me and guide me.

I felt it changed from something that could have been comforting to something sinister and potentially traumatising.

Prayer is, for many people, a powerful and spiritual experience.

Belief in God helps many religious people in their lives in numerous ways. I grew up in the church and understand how faith can be a strength and a comfort.

But my experience at Winners’ showed that there is a disturbing ignorance around issues of sexual orientation in some churches.

Some of the pastors who counselled me made highly disturbing comments, comparing me to brainwashed children in Nazi Germany.

There was little sensitivity about how this could have been incredibly damaging to me.

Related Topics:GayhomosexualityWinners Chapel
Up Next

“In terms of the size of our economy and debt, we are doing okay” – Osinbajo