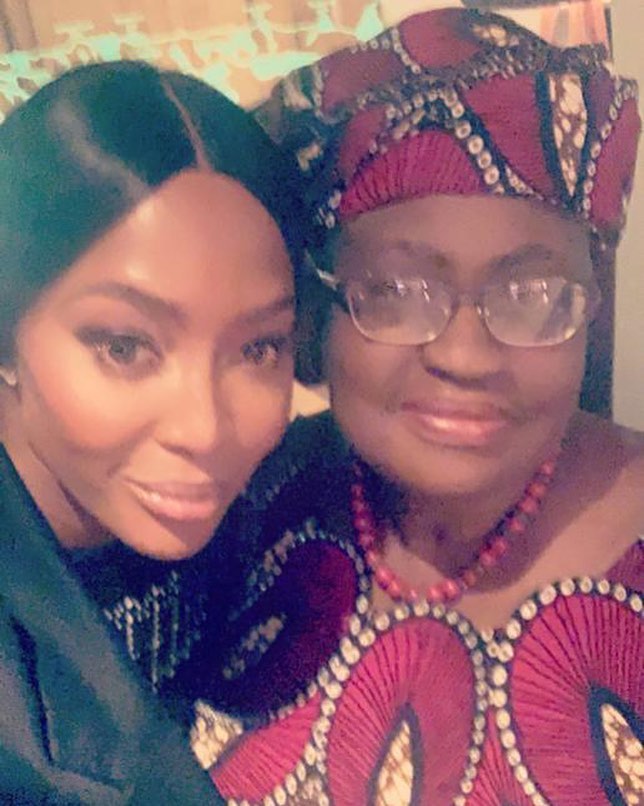 Naomi shared a photo of the two of them together on her Instagram page yesterday and stated that she had been really looking forward to meeting Ngozi Okonjo-Iweala at the World Economic Forum.

The only person I wanted to meet this year at the World Economic Forum in Davos, Switzerland over a beautiful dinner we shared our strength’s and hope ?? The BRILLIANT & BEAUTIFUL Ngozi Okonjo-Iweala; globally acclaimed economist, Nigeria’s first female Minister of Finance, active board member for a variety of large and impactful organizations like the African Risk Capacity, Standard Chartered Bank and Twitter – she’s one of Fortune’s 50 Greatest World Leaders in 2015 and Forbes Top 100 Most Powerful Women In The World, 2011-2014 ?? Ngozi, you are the epitome of #BLACKEXCELLENCE and a trailblazer for women around the world!! ✊? I’m inspired by your intelligence and vision, you are history in the making ? #BlackHistoryMonth ???♥️

Here’s what she tweeted:

Thank you @NaomiCampbell for such kind words. And thank you for all you are doing to make fashion, architecture, and technology accessible to those without access on the continent, and for being a voice for people of African origin in the industry and around the world. pic.twitter.com/hMV8uUbK2a

64-Year Old Ngozi Okonjo-Iweala is currently a globally recognized economist and she sits on the Boards of Standard Chartered Bank, Twitter, Global Alliance for Vaccines and Immunization, and the African Risk Capacity.