Nigerian columnist, philanthropist, writer, publisher, and founder of Genevieve magazine Betty Irabor has ignited a much-needed conversation on Twitter about some of the potential risks when job hunting in Nigeria.

In a tweet, she shared her experience with an unemployed guy who reached out to her. She asked HR to invite him for an interview but he didn’t show up, saying he did not apply for the job (she hadn’t revealed her identity). After finding out the HR invitation was from her, he’s now seeking an interview.

A guy reached out to me..2 degrees, jobless, broke. I askd HR to invite him for interv without disclosing my identity. HR sent guy a mail; guy didn’t respond. HR calld him but guy said he didn’t apply for a job & didn’t turn up 4 interview. Now he knows it’s me & wants an interv

Almost 500 people are currently talking about this on Twitter.

Her tweet has been met with mixed reactions from people in the comment section. Some believe they would have done the same under the circumstance considering the number of false interview invites that job seekers receive in the country.

Please I don't blame the guy ooo. In this current naija, one can't be too careful. Too many dubious job openings and agents. Even the ones thrown out there by the Nigerian govt get as e be

Please give him a chance??He has actually shown a positive skillset – being cautious and won't likely easily fall for scams.

He didn't apply for that specific job, so his response was in order.

Too many employment scams in Nigeria.

While some believe the guy seeking employment did not carry out due diligence.

But he did not display the can do spirit which required him to go further to verify the authenticity of the email he received. If as a graduate he was not able to google the company name, verify the physical address he was supposed to go for interview, he is not proactive enough.

A Google search would have helped in background check of the said coy.

An interesting spin-off of the tweet has been the number of people saying they have had similar experiences and were also cautious because of the possibility of being led on falsely. 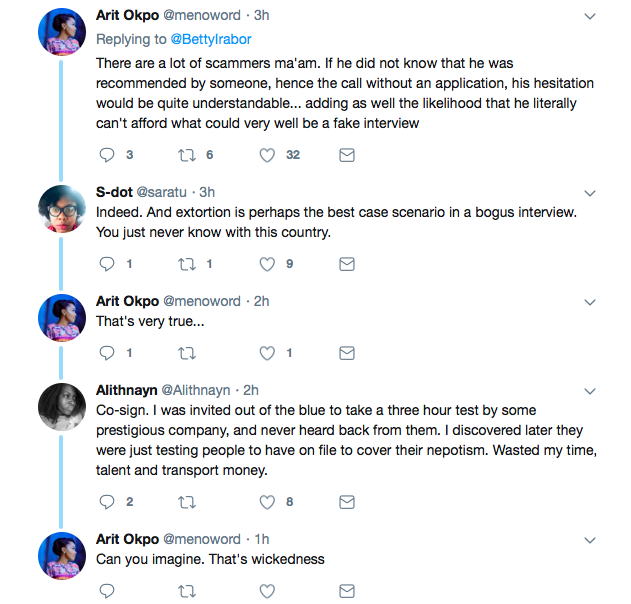 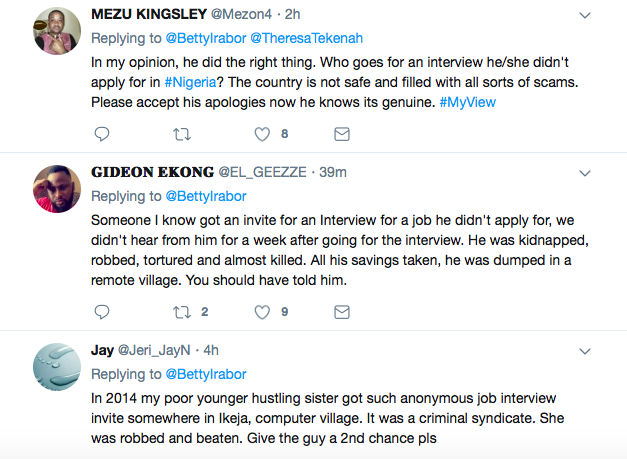 Related Topics:Betty Irabor
Up Next