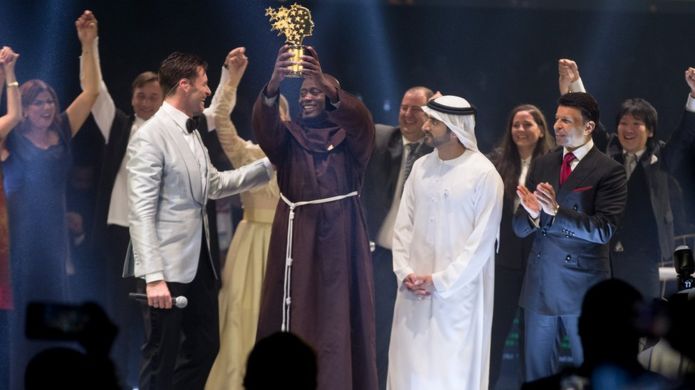 A Kenyan mathematics and physics teacher who donates 80 percent of his salary to help young impoverished students has won the world’s best teacher award.

According to BBC, Peter Tabichi was awarded the fifth Varkey Foundation $1 million Global Teacher Prize at a ceremony hosted by actor Hugh Jackman in Dubai on Sunday.

Tabichi won the prize from a pool of over 10,000 nominees from 179 countries.

Tabichi is a Franciscan monk, a member of the Catholic religious order founded by St Francis of Assisi in the 13th Century.

Tabichi is building Africa’s future from a remote, semi-arid part of Kenya’s Rift Valley, with 95% of pupils from poor families, some are orphans or have only one parent.

Watch Tabichi tell his story below:

The prize is awarded to a single teacher who has made an outstanding contribution to the profession, and aims to shine a spotlight on the role that teachers play in the society.

The winning educator is allowed to put their $1 million, awarded in equal instalments over 10 years, towards new projects and initiatives of their choosing.

Receiving the price, Peter emphasized the potential of Africa’s young population. He wants pupils to see “science is the way to go” for their futures. He said:

As a teacher working on the front line I have seen the promise of its young people – their curiosity, talent, their intelligence, their belief.

Africa’s young people will no longer be held back by low expectations. Africa will produce scientists, engineers, entrepreneurs whose names will be one day famous in every corner of the world. And girls will be a huge part of this story.

It’s morning in Africa. The skies are clear. The day is young and there is a blank page waiting to be written. This is Africa’s time.

In an environment where pupils come from struggling households, many are orphaned, and addiction and early marriage are common, Peter added that the prize gives them a chance and tells the world that they can do anything.

Watch the moment he was announced below:

Hey BNers, You have Only 5 Days to Apply for the 2019 Anzisha Prize