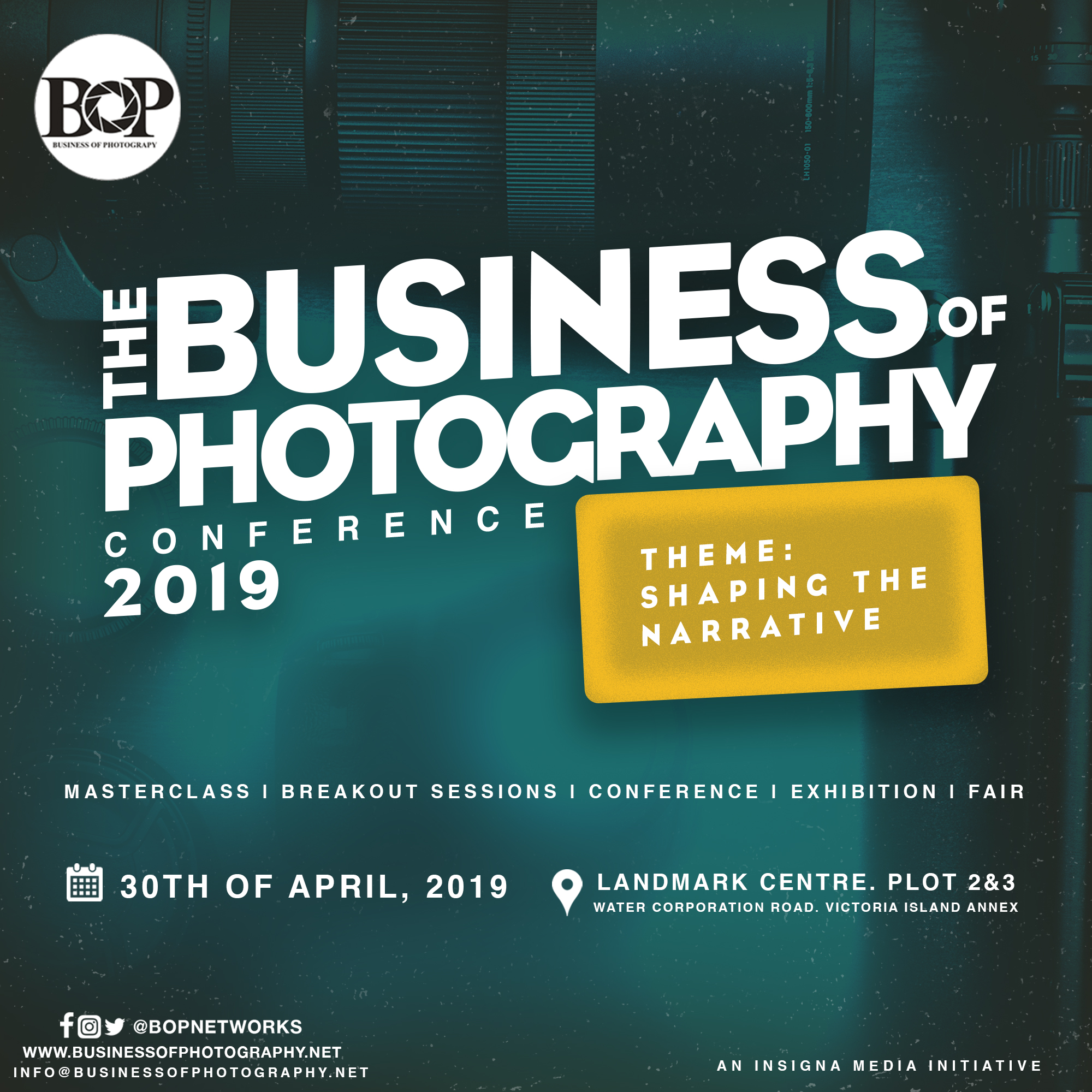 Hey guys, we are really excited to announce that this year’s Business of Photography Conference is scheduled to hold on Tuesday, April 30th, 2019 at Landmark Event Center, Lagos. This 12 hour event promises to be bigger than the maiden edition and will feature five segments;

During the conversation segment, attendees will have the opportunity to listen to and chat with award-winning Nigerian photographers as well as business, finance and strategy professionals from other disciplines about the future of photography in Nigeria and how we can help shape it. Great Right?

The maiden edition which took place on Tuesday, April 24, 2018, opened its doors to over two thousand participants who learned all about the basics of the business of photography, the challenges and the solution to the many challenges.

This year’s Business of Photography Conference is aimed at bringing photographers, photography manufacturing and servicing companies as well as photography retail businesses together under one roof to discuss, learn, exhibit, sell and buy everything photography. In recent times the need to efficiently monetize the photography industry and define its future as a major part of the current and future national revenue generation sector has become more important. 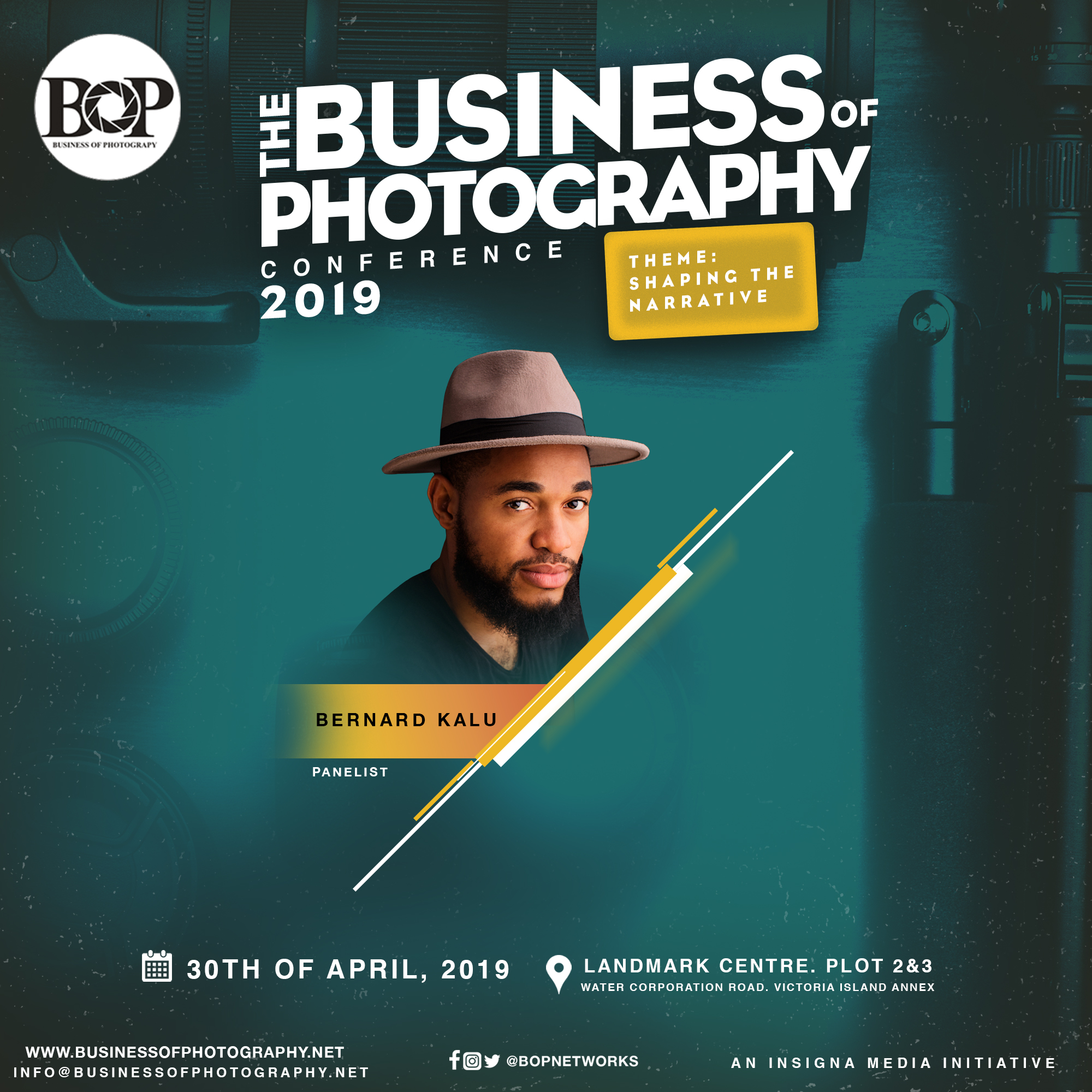 Bernard Kalu is a documentary photographer based in Lagos, Nigeria; his work is inspired by a passion to explore life and humanity. Photography is drawing with light and he’s adopted it as a tool to not only tell stories but preserve today for the future. Bernard began working in photography in 2014, exploring street documentary and creative twists to wedding photography- with Verteller Studios. He is a certified canon master storyteller, first runner up in the 2017 NatGeo portfolio review and has been on assignment with a number of organizations within and outside Nigeria. To mention a few, #MyMakoko project by NBNL, Respiratory stories for The Lancet, African tourism project by MyAfricanPassport Inc. and so on. Also, he’s a very passionate tutor/mentor to a good number of upcoming visual storytellers. He had his first exhibition in early 2017 at the Revolving Art Gallery. More recently, he has begun focusing on raising awareness about environmental and social issues in his home country, Nigeria. 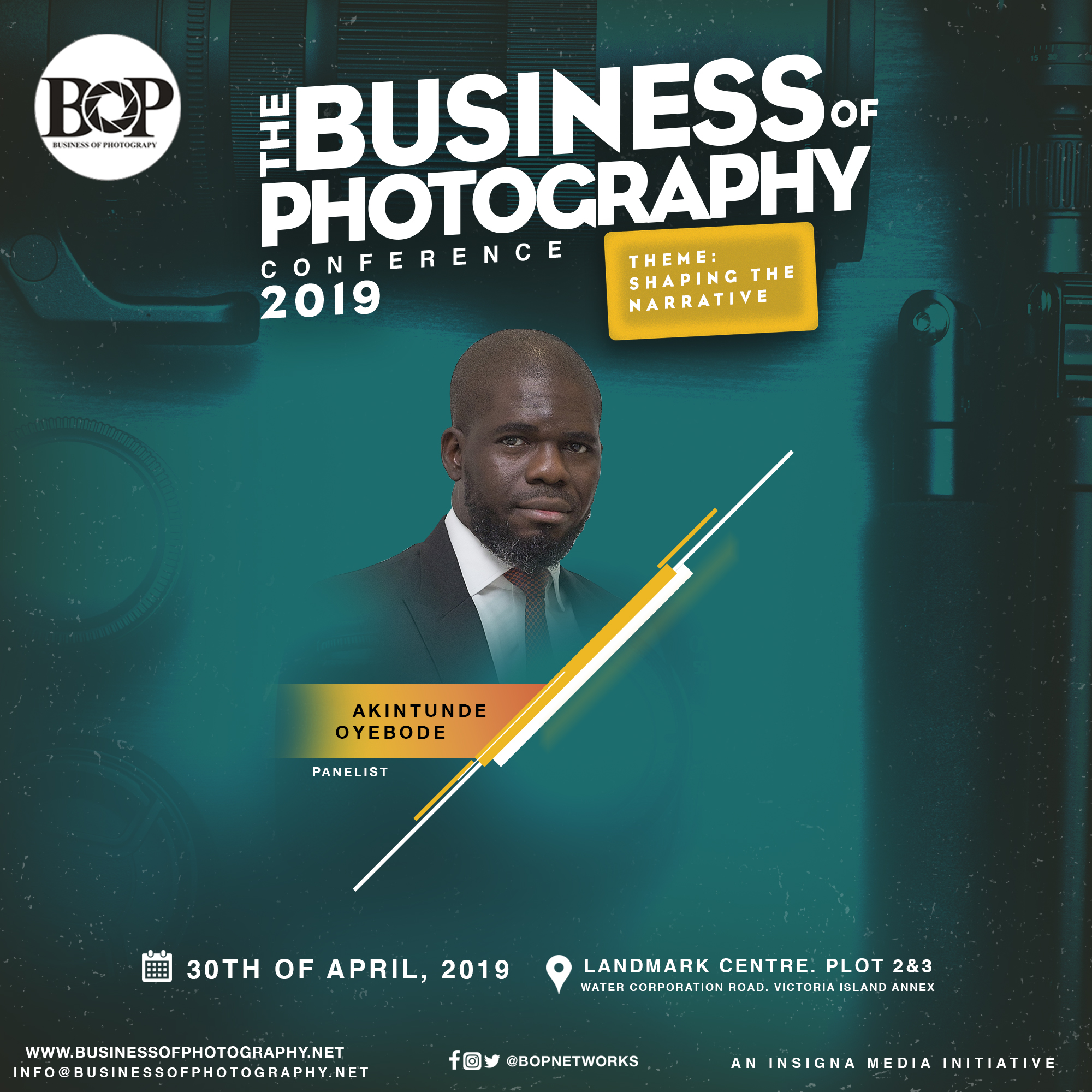 Akintunde Oyebode is a trained Economist, passionate about sustainable development, sustainable finance, and youth unemployment. He began his career as a Research Assistant at the Lagos Business School and spent over a decade in various banking roles with First City Monument Bank (FCMB) and Stanbic IBTC Bank. Akin is the pioneer Executive Secretary of the Lagos State Employment Trust Fund (LSETF), established to provide financial support to residents of Lagos State, for job and wealth creation and to tackle unemployment. His key focus at the LSETF is on promoting entrepreneurship by improving access to finance, strengthening the institutional capacity of Micro, Small and Medium Enterprises (MSMEs) and formulating policies designed to improve the business environment in Lagos State. Prior to his role as Executive Secretary of the LSETF, Akin was the Head of SME Banking at Stanbic IBTC Bank. 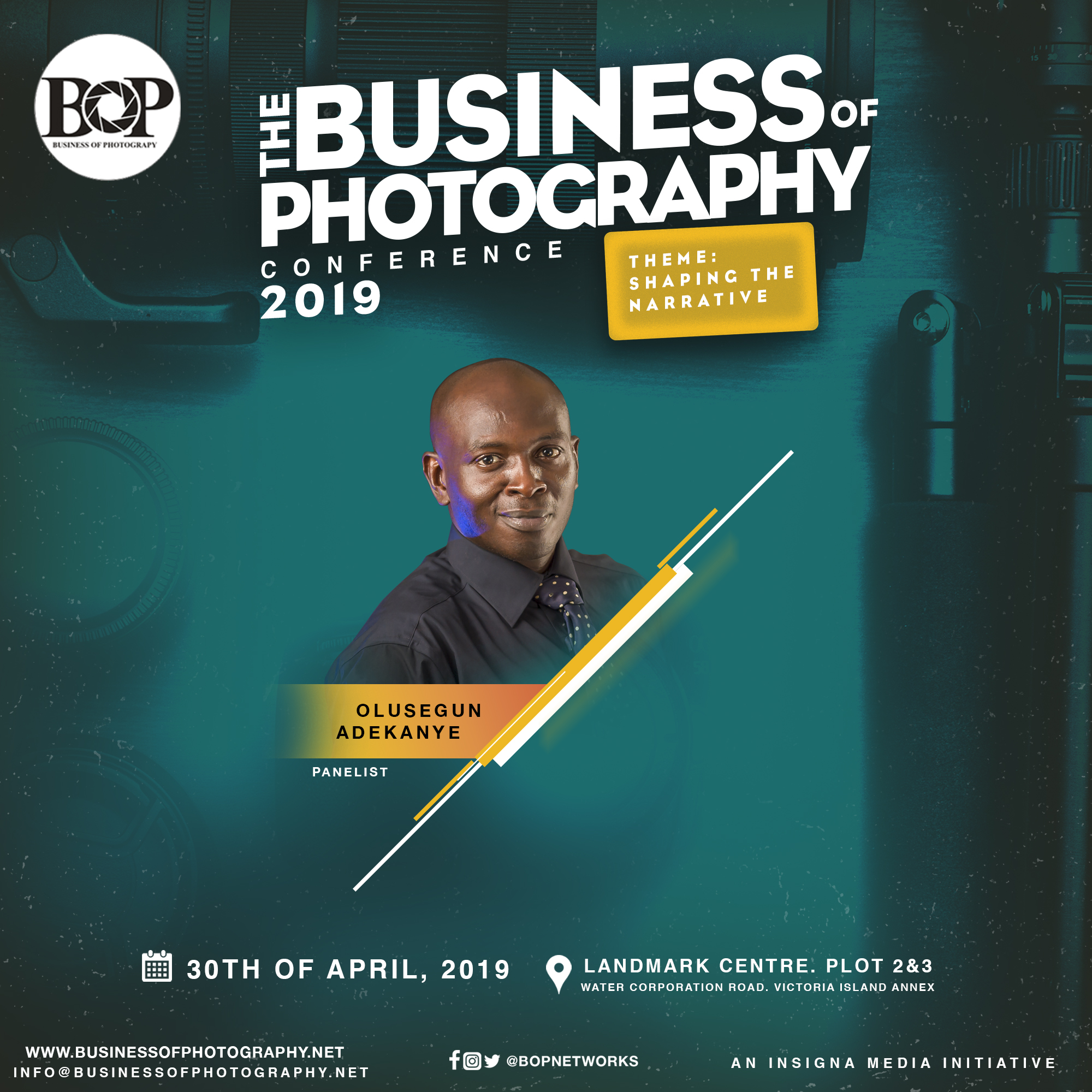 Olusegun A. Adekanye is a professional wedding and portrait photographer and was born in Kaduna. He was raised in Kano and Lagos but frequented his ancestral home in Offa, Kwara State until his departure from the country when he was 19. His Architecture degree which he started in Minna, Niger State, at the Federal University of Technology, Minna, was completed at the University of Greenwich in London. He lived in Copenhagen, Denmark for a year and a half where is career begun leading him to start B7K- photography.com in 2011 in Berlin, Germany. He doesn’t just take photographs; he encapsulates and preserves precious moments and memories. He is also has a penchant for the abstract and dramatic @b7k_photography. 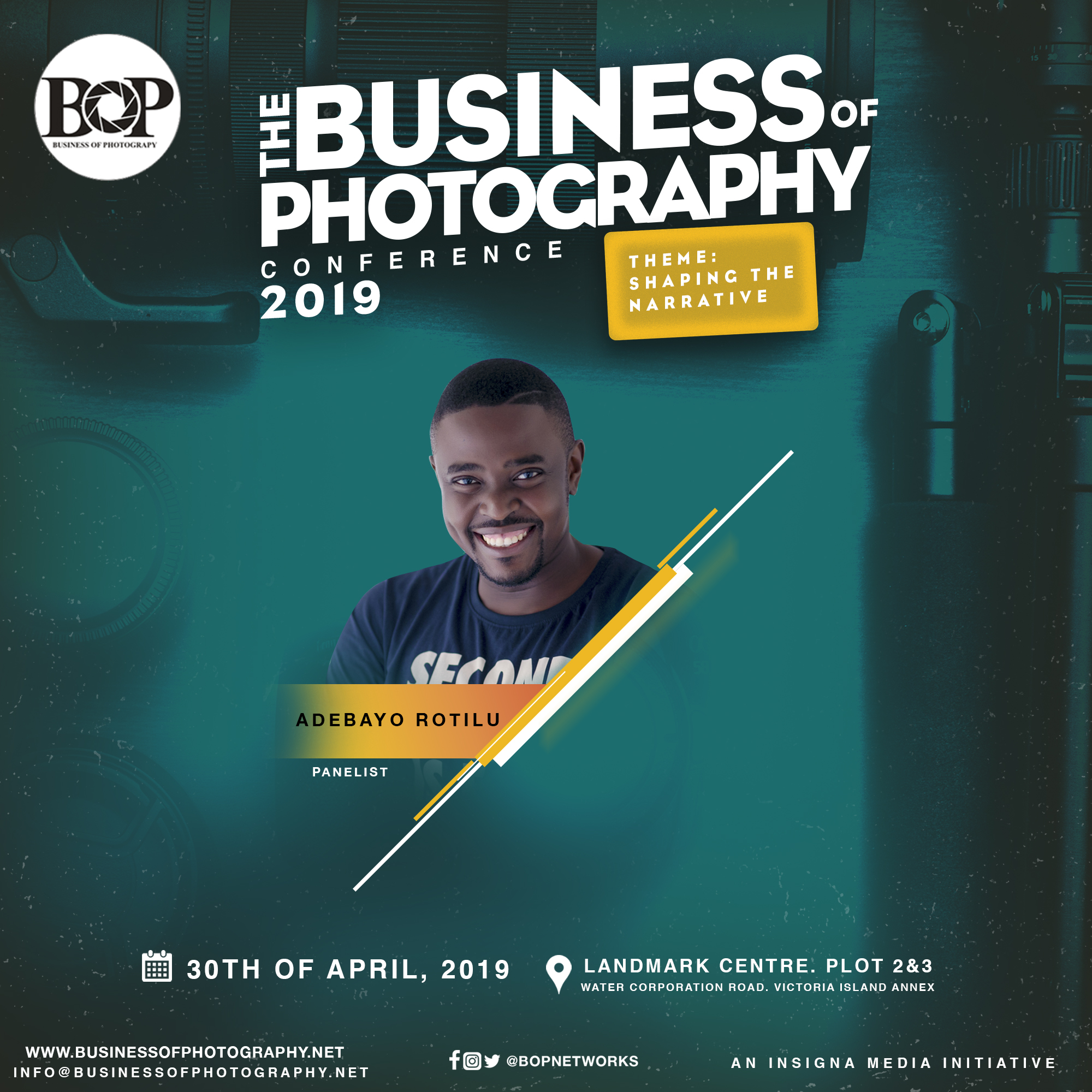 Adebayo Rotilu preferably called “Debayo” is a Full-time Product and Commercial Photo-Artist based in Nigeria. He’s got an Educational background in Computing and Project management with an MSc from the University of Glamorgan UK. He is the founder and the Creative Director for TWELVE05 IMPRESSIONS (A subsidiary of TWELVE05 PHOTO FACTORY) a company founded out of his passion for the Art and Science of Photography.
His journey began in 2012 when he searched for African images online and only saw images of poverty, chaos, and anarchy; images which lacked visual appeal. He has since contributed immensely to the African Cultural and Business gallery and he works with creative agencies and directors their visuals to life. Debayo has been involved in a number of Photography Projects over the past decade, some of which include: Diageo Nigeria, Nigerian Bottling Company, Eat N Go Nigeria, Standard Bank, South Africa, House of Tara, Nasco Group, FMN Group (Golden Penny) So Fresh Nigeria and many more. Other brands he has worked with include, James Cubit Interior Architects, TW Magazine, to mention but a few. 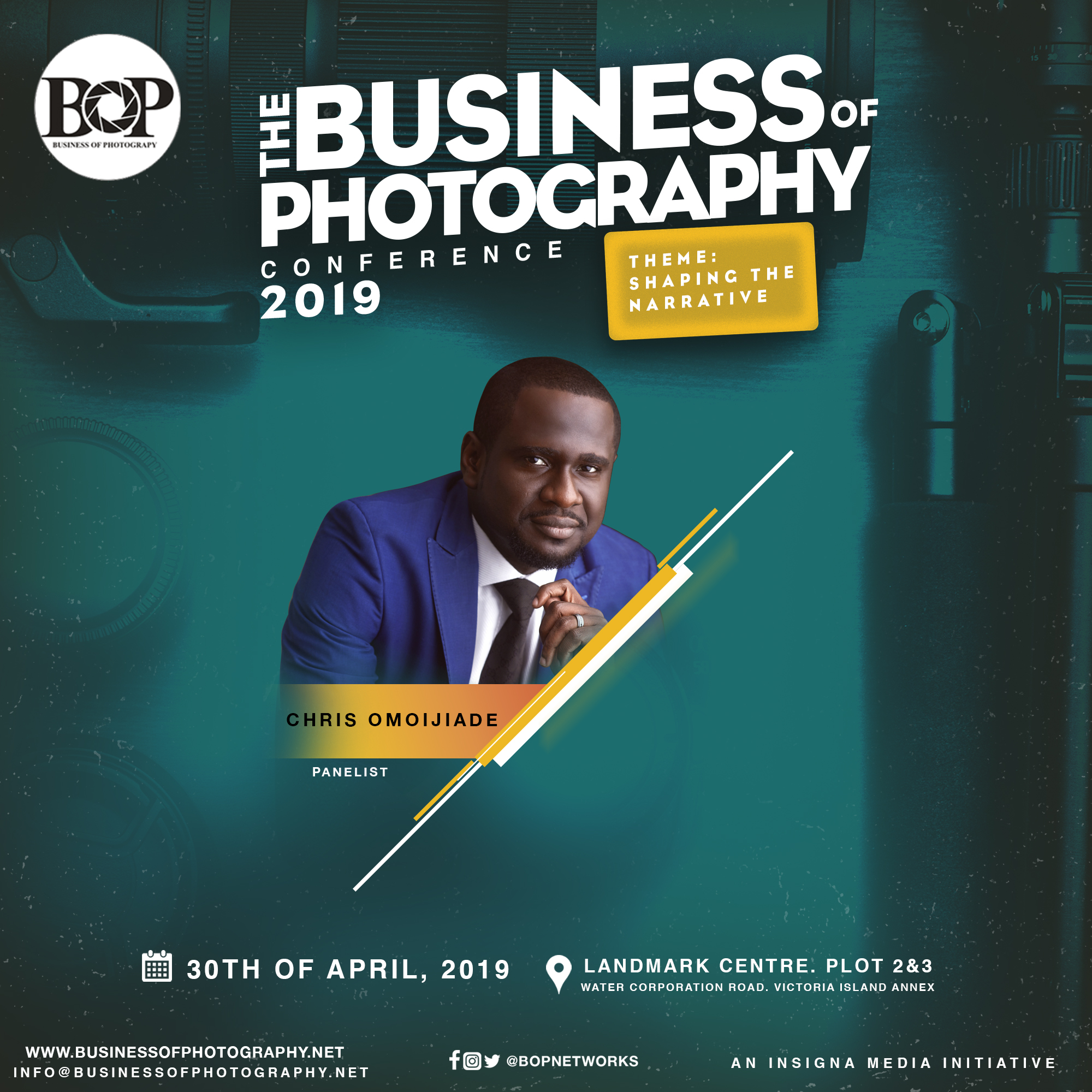 Christopher Ehinomen Omoijiade “CEO” often referred to as “The Dean of Value Creation” is a Professional Speaker, Coach, Mentor, and Innovative Consultant; he is the Chief Executive of The Chris Omoijiade Company, a leadership, Management, and innovative consultancy boutique firm dedicated to effective implementation of tools to enhance the value proposition and productivity of individuals, companies and the Public Sector. He is also a lawyer with over a decade experience in commercial law and is an entrepreneur responsible for spearheading the launch of a number of business ventures he presently sits on the board as Partner and Director in various sectors such as Law, Property, Financial Investment, Foreign Exchange, Education, Marketing & Communications, Trading, and the Travel & Hospitality Industry Chris Belongs to a number of organizations and associations and is actively involved in volunteerism. He lives in the beautiful city of Lagos and is happily married, and is an unrepentant reader with an unchecked addiction for knowledge and is on cue in becoming an author in 2019 with an upcoming book chronicling views and comments on life and business with a mission to touch a million unique individuals. He is a proud soccer lover sharing a unique relationship with his other love Manchester United. 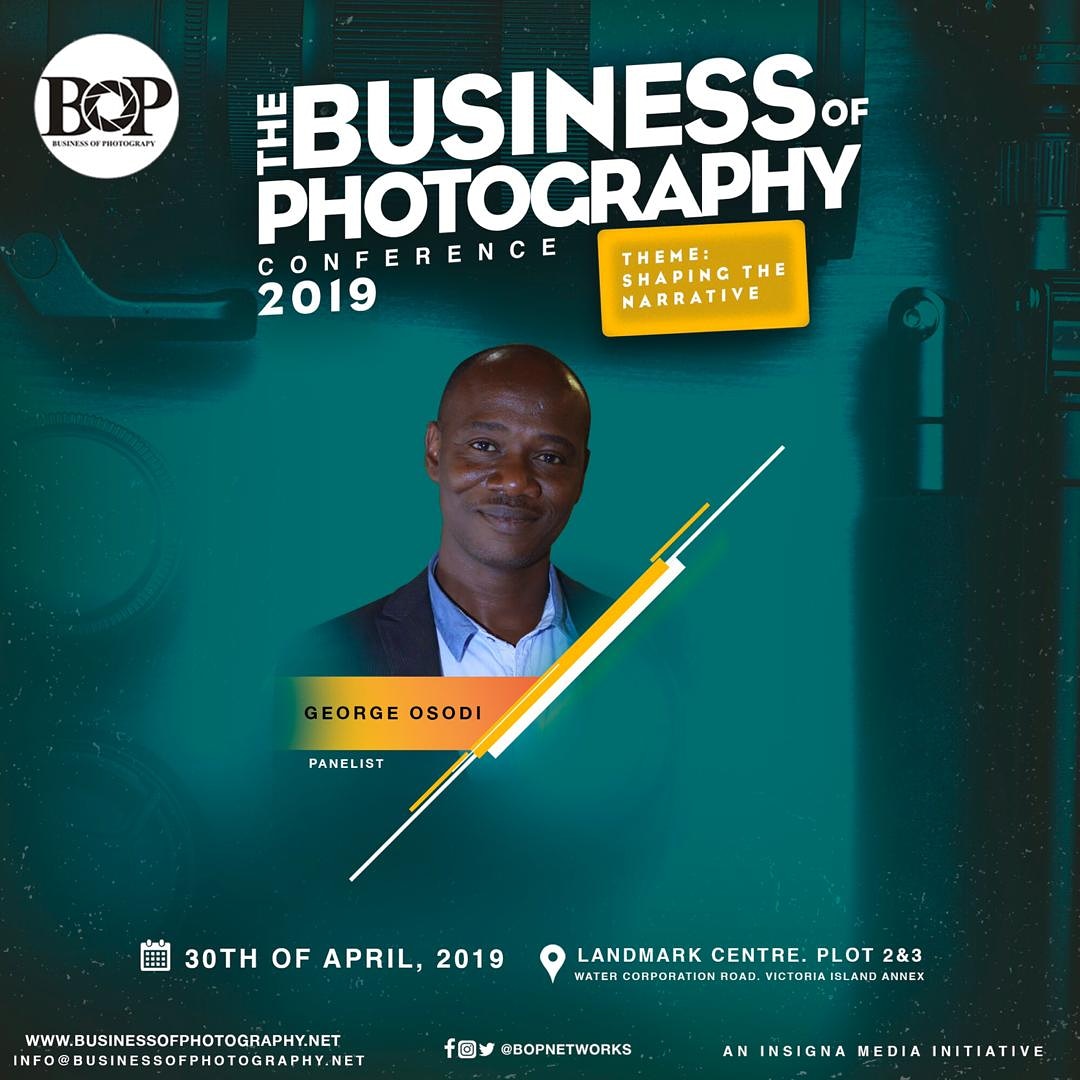 George Osodi is an award-winning internationally acclaimed Nigerian Photographer. His photographs range between photojournalism and artistic documentary, and he has worked on various photography projects globally with his works exhibited in several Museums, Biennial’s and in institutional Art Spaces, such as Documenta 12 in Kassel, Germany 2007, a Participant of the 2015 Venice Architectural Biennale, as part of the Canadian Pavilion.
A first prize winner of Fuji Africa photographer of the year 2004, and winner of a Sony world photography award 2009. He participated as a juror of World Press Photo competition in 2016. Osodi’s works are in the collections of various Museums around the world,among which includes the Smithsonian U.S.A, Newark Museum U.S.A, National Museum of Greece, Museumslandscha Hessen Kassel in Germany, Modena museum Italy, ADF collection in Paris, Ford foundation Lagos Nigeria, Martin Margiles Collection, Miami, US and a number of private collections.
Osodi is the author of a photography book “Delta Nigeria – The Rape of Paradise”. He has also held talks at various Museums and institutions globally including Columbia University, New York U.S.A, Indianapolis University U.S.A, University of Wales, Newport, UK, Pan Atlantic University, Lagos, Nigeria. National Museum of Contemporary Art, Oslo, Norway, EMET, Athens, Greece, 2010 and the International Slavery Museum Liverpool. 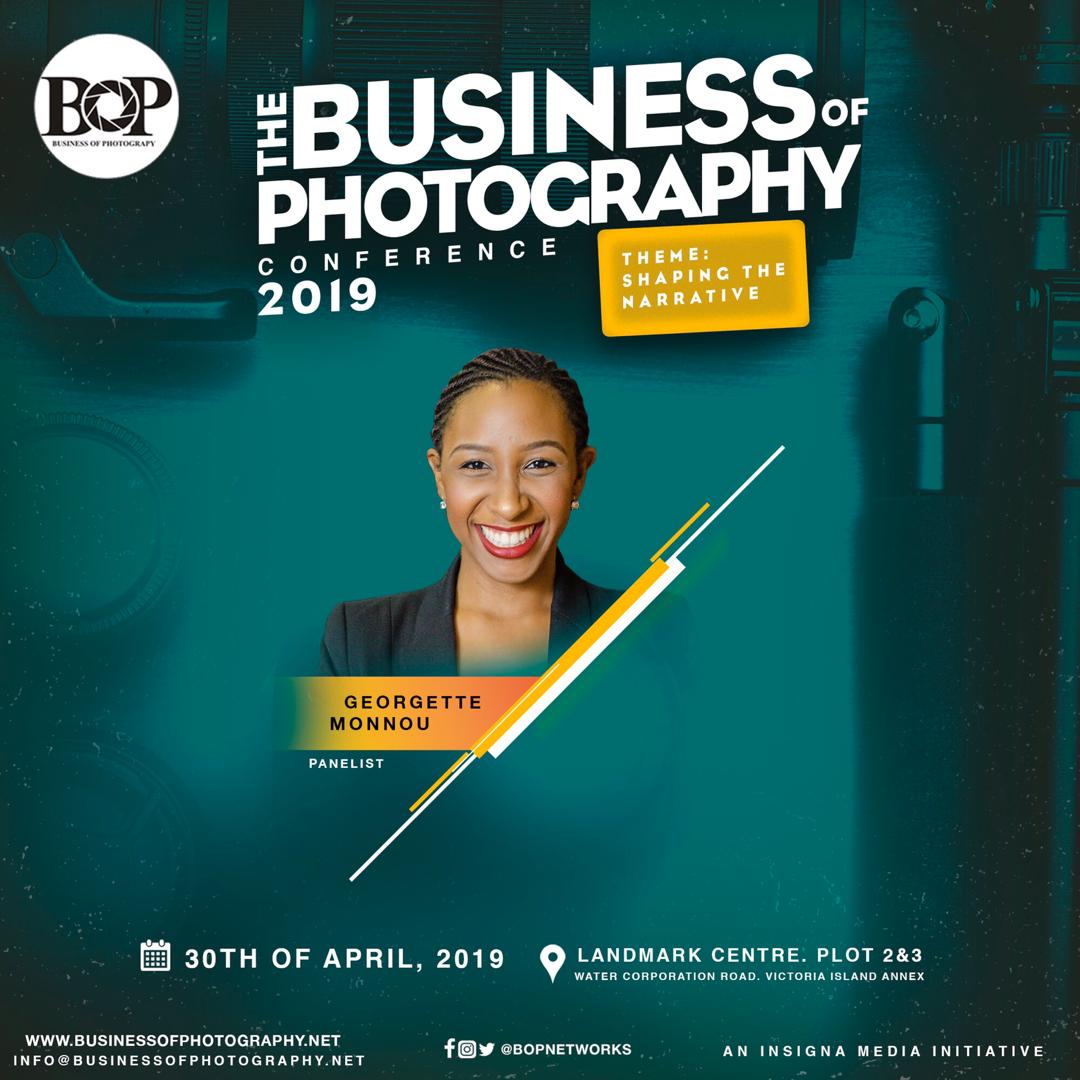 Georgette is an Associate at Olaniwun Ajayi LP and works in the firms Finance & Capital Markets Practice and Entertainment, Leisure & Media Practice. Her experience spans advising on diverse finance matters including equity financing, local and international debt financing, derivatives transactions as well as the intricacies of drafting technical Entertainment and Media contracts. Having also gained litigation experience, Georgette has provided notable companies with legal representation across superior courts in Nigeria, which also included launching a test case for defamation against one of Nigeria’s foremost bloggers. Georgette regularly consults for members of the creative arts on their rights, contractual needs and potential areas of expansion in the Entertainment Industry with her commercial knowledge stemming from having gained experience working in radio, film, and television.
As a creative, Georgette regularly writes for BellaNaija, Thought Catalog, Creativity Turf, and other notable online platforms. Georgette is a graduate of Law from the University of Exeter and has completed the Legal Practice Course (LPC) at BPP University specializing in Intellectual Property, Media and Entertainment Law and Debt Finance. She is also an active member of the Nigerian Bar Association. 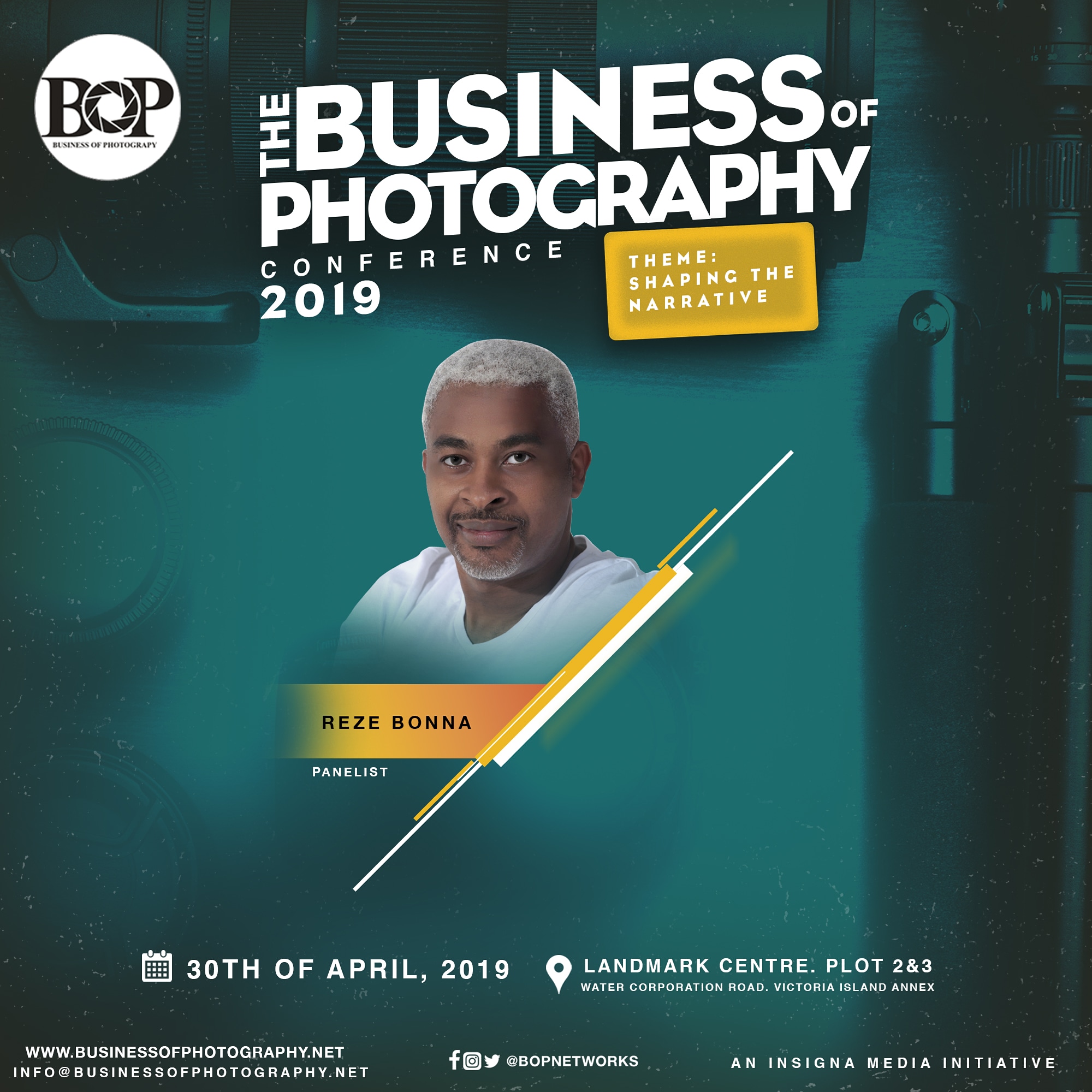 A trained architect and multi-award winning photographer, recently being awarded Best Fashion Photographer Africa 2017 at the Abryanz Style and Fashion Awards, which held in Kampala, Uganda 2017 and The Fashions Finest Awards, Lagos 2018 amongst others… His work is featured in several international publications including Vogue Italia, GQ, Architectural Digest, Menshealth, etc and featured in CNN, Fashion One, Fashion TV, Spice tv, with his images currently exhibited in the Grammy Museum as a part of the African music section. He has worked with personalities like Bill Clinton, Goodluck Jonathan, Roberto Cavalli, The late Franca Sozanni (Vogue Italia), Suzie Menkes, Kirk Franklin, Piers Morgan, Janice Dickenson, etc. He runs photography outfits in South Africa, The USA, and Nigeria, servicing a number of the agencies in the countries. He is currently the official photographer for the AFI Cape town and Johannesburg Fashion weeks, Mens health Magazine Fashion show, David Tlale Brand and also for The Intern by David Tlale, and formerly been the official photographer for the Arise Fashion Week in Nigeria, and has covered Fashion Weeks in London (LFW), Lagos (LFDW, MMR, AFW, GTFashion weekend), Dubai (Arab Fashion Week) and South Africa. He has a gift of finding beauty in everyone, and a persona that easily puts his subjects at ease. His inspiration from art and architecture, and the principles of it, like Form and Function, Light and shade, shapes, flexibility, strength of the material, and perspective, are expressed strongly in his work. Pi88He is a founding member of the group REZolution which is a collective of creative photographers and a member of the Camera Club of Johannesburg, and the Professional Photographers of America.
—————————————————————————————————————————————–
Sponsored Content

Related Topics:Business of Photography Conference
Up Next

Save The Date! Easter Monday will be Good Vibes Only & Fun at “HEY” Party | April 22nd