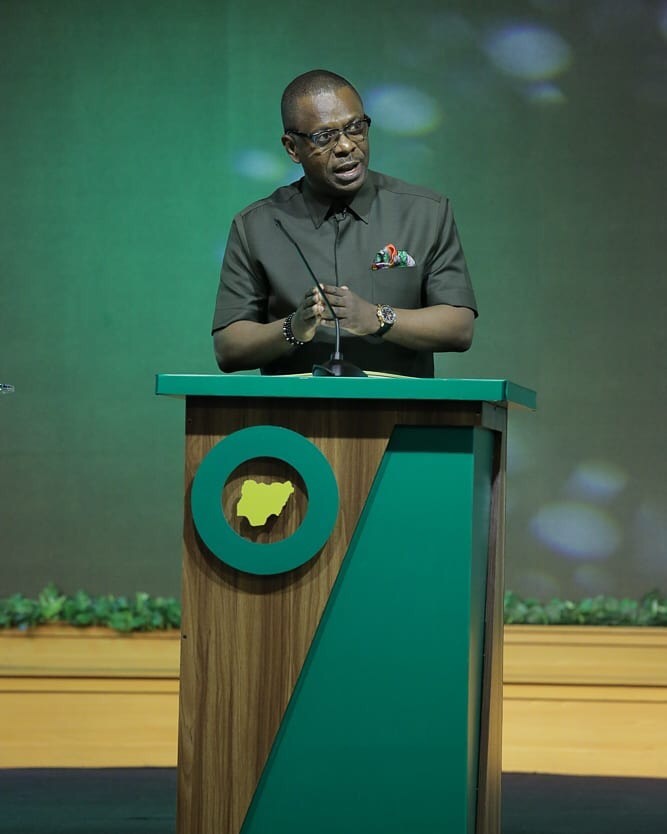 The convener of The Platform, Nigeria, Pastor Poju Oyemade has said that Nigeria’s problems are rooted in societal indifference and personal callousness caused by the imperfections of men, and in solving this problem, there is a need for a change in government policies, implementations and individuals’ approach to the national issues and concerns.

He said this during his opening speech at The Platform 2019, themed ‘Re-designing the Nigerian economy with new ideas.’ held on Independence Day at the Covenant Place.

“our dream for a better Nigeria requires nourishment from institutional knowledge gathered over the years, which is why we host this program and we invited people who can inject information that will make the country achieve the dream of a better Nigeria. This is why we have some of the best economic minds in Nigeria at this conference who also have experience in governance.”

“There is a need for a change in Government policies and in the hearts and minds of people. This is where faith can be used to appeal to the transformation of the conscience of men. Faith can play a huge role in transforming Nigeria as a nation, and that is why we have invested so much in The Platform to ensure it is done twice a year,” he added.

Speaking at the event, the former Governor, Central Bank of Nigeria, Professor Chukwuma Charles Soludo, opined that a better Nigeria is that which is powered by the country’s greatest asset, human capital plus technology and not one dependent on oil.

In his words, “Nigeria urgently needs a new Fiscal Responsibility Act to constrain irresponsible fiscal behavior and provide incentives to create wealth. A new fiscal regime should ensure that never again shall we need a wholesale bailout of state governments.”

Explaining that “fiscal transfers should be based on performance as well as in the form of matching grants scheme (thereby replacing unconditional transfers with conditional transfers). Also, fiscal responsibility law could constrain governments at all levels to meet their recurrent expenditures out of their internally generated revenues while revenue from natural resources are deployed only for physical and human capital development.”

Soludo urged the citizens not to be discouraged, saying, “Of course Nigeria has a long list of problems, but adversity comes with opportunities. With a will to overcome, the problems should not stop us. Nor should a few thousands of miscreants; kidnappers, terrorists, internet scammers, bandits, drug barons, robbers, and treasury looters define us.

As we build the foundation for the next Nigeria, we must seize the narrative and sing a new song to rebrand Nigeria. As we bemoan the rising poverty and unemployment, we still remind ourselves that ours is still the largest economy in Africa and Nigeria is home to the most populous black nation on earth.

Also speaking at the event is the CEO Financial Derivatives Limited, Bismarck Rewane, who said

He noted that things outside the country’s control are more than things within its control.

“When the institutions of conflict resolution are broken, the alternative to what you have is anarchy. The social contract between the rulers and the ruled is very important as it’s so cheap to just talk than to act.

Recall that Rewane and Soludo are members of the eight-man Presidential Economic Advisory Council (EAC).
Meanwhile, the Governor of Lagos State during an interactive session at the event revealed that he is aware of the need to fix basic infrastructures and tackle the challenges in the health and education sectors, stating that he is determined to improve on the situation to cater for the growing populace.

Other speakers at The Platform 2019 include the Former Governor of Anambra State, His Excellency, Peter Gregory Obi; Leading expert on Strategy, Globalization and Emerging Markets, Dr. Anil Gupta and others.