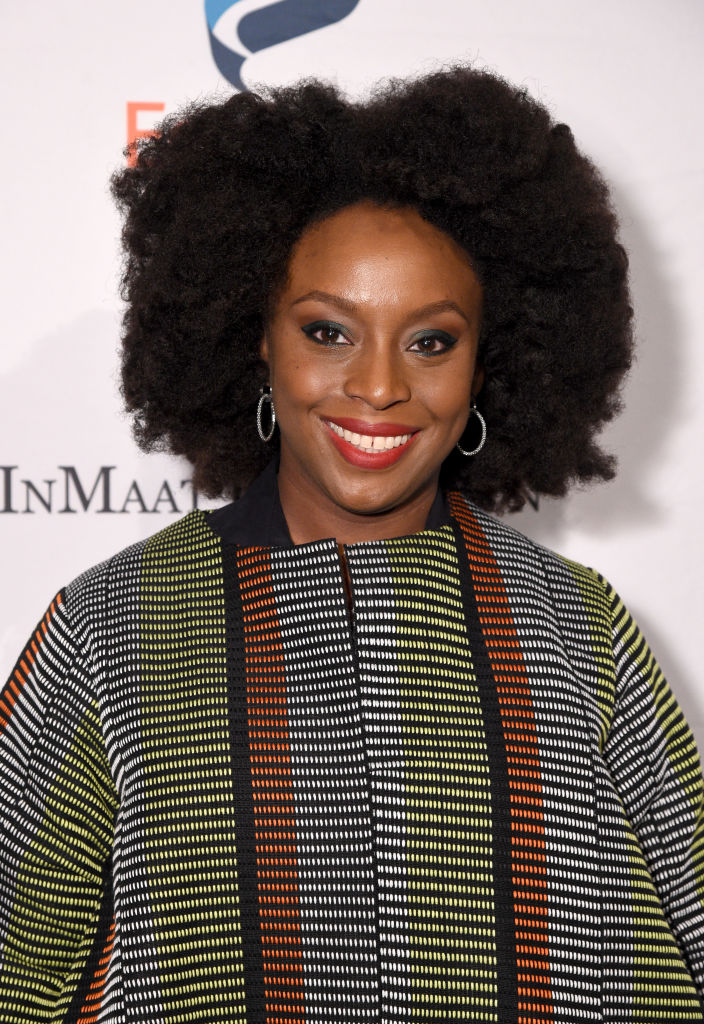 Chimamanda Ngozi Adichie has still not gotten over how her book “We Should All Be Feminists” became a fashion statement at Maria Grazia Chiuri’s Dior debut in 2016.

The award-winning author was surprised by the specially designed banners on the runway show that embroidered some of her quotes, such as:

“What if women ruled the world?”, “Would both women and men be gentle?”, “Would there be equal parenting?”, “Would God be female?”

Sharing how the display on the runway gladdened her heart, she says:

I believe we live in a time where we’re just not asking those questions. I found it incredibly moving when I walked in just now.

There is something about the world today, politically and economically, that isn’t very hopeful and so to be in this space that is fleeting and obviously not ‘real’, but still be a place where we can ask those questions… it just moved me.

I think fashion is driving important conversations more and more – as it should. People are finally waking up and realising that it can do both; it can create beautiful things and have something to say.

Maria and Chimamanda’s bonding “started with a handwritten letter that Maria Grazia had sent to Adichie, detailing how she had read and enjoyed her work, and seeking her permission to use Adichie’s phrase ‘We Should All Be Feminists’ on a T-shirt, a tagline lifted from the novelist’s short book and her TEDx Talk on the future of feminism. The author liked that the letter was handwritten, and so she agreed to the request”, Vogue says.

Chimamanda, who is totally in love with Nigerian designer wear (see her #WearNigerian Project), has slayed effortlessly in brands such as The Lady Maker, Ejiro Amos Tafiri, 2207bytbally, Orange Culture, Lola Baéj, Jzo Fashion and Moofa.

On her love for fashion, Chimamanda says,

Being raised by my mother in Nigeria, I can’t remember when my world wasn’t a world where you cared about how you looked. She always liked to dress up. I remember when I was small, she would always dress me up on Sundays; I’d wear a smart dress with little frilly white socks. I also remember how she would sit me at her dressing table, pile my hair up in a bun and put her jewellery on me. My mother is a very beautiful, joyful woman. She was also a trailblazer in academia, working her way up to be the first female registrar at the University of Nigeria.

I’ve been to Paris several times but I’ve never really done tourist things. We will have fun. I’m just looking forward to being in the moment with her. So often I catch myself mourning when she was younger; reminiscing about when she was a baby. It’s important to enjoy the now.