We Fell In Love With Thebe Magugu's Ipopeng Ext. Exhibition at Paris Fashion Week - Here's Why

The BN Style Recap: The Stories African Fashion Girls Are Reading All Week! 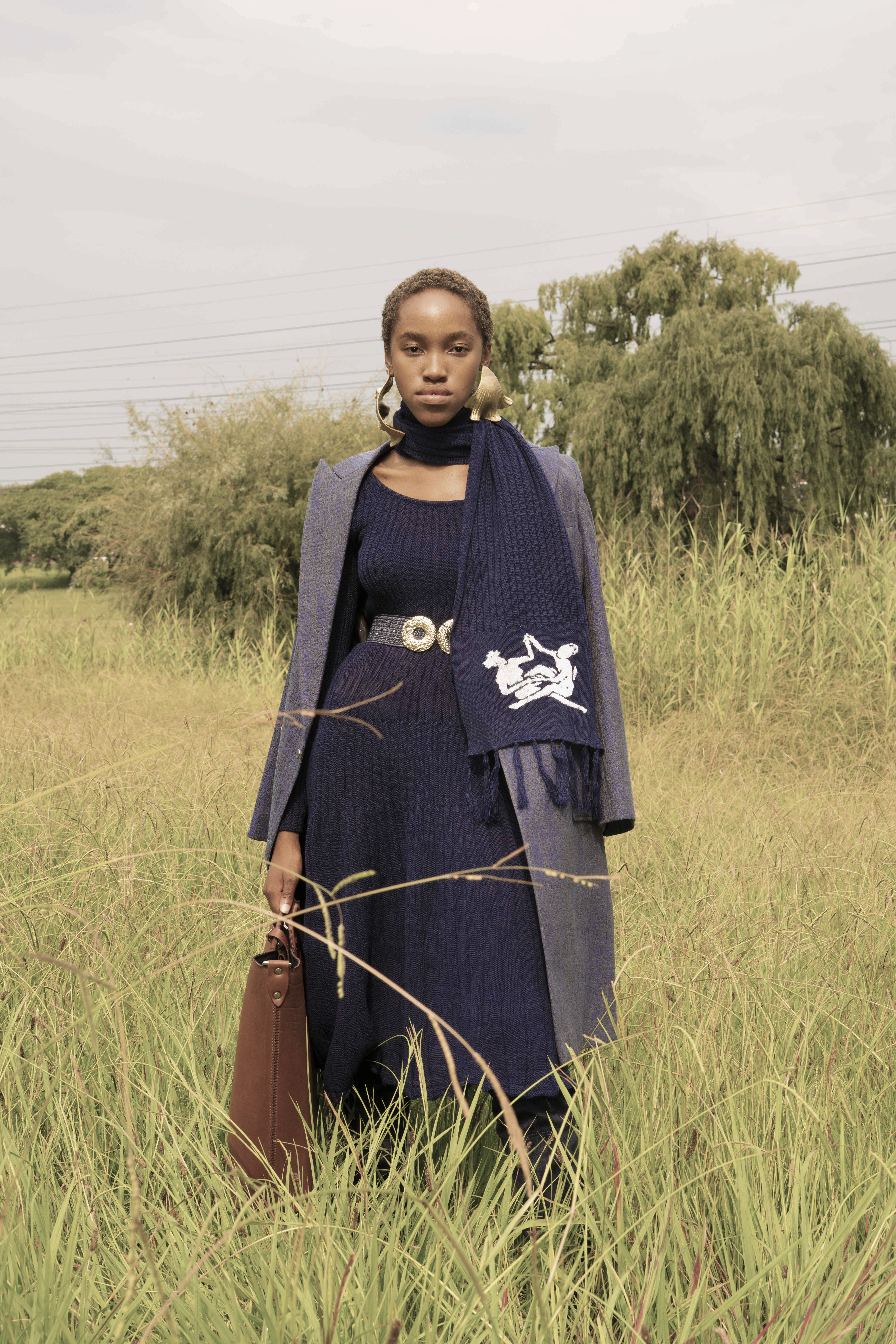 In a statement from the brand (about both the “ANTHRO 1” COLLECTION A/W 202 collection) and the exhibition:

IPOPENG EXT. showcases the many faces and places who mural Thebe Magugu’s work and served as his earliest and most poignant references – from the lush, humbling wild to an electrifying sense of culture and tradition. In Setswana, Ipopeng means ‘to beautify yourself.’ It also means ‘a tight knit community, a close group of people’.

“I can tell you so many stories about the people of Kimberley; about their self-sacrificial nature, their unconditional love, and inherent spirit of Ubuntu (togetherness), even within an arid and often hostile environment. In fact, I often say that it’s these extreme contrasts – beauty VS brutality, extravagance VS economy, tradition VS modernity – that have fueled my work. This is why this project, titled “IPOPENG EXT.”, is so important to me. Ipopeng is the name of the township I grew up in.” – Thebe Magugu

For Autumn Winter 2020, Thebe Magugu went back to his hometown of Kimberley to photograph the people and places who raised him and who inspired his latest collection, titled ‘Anthro 1’. The collection is motivated by the visual cues he saw growing up – like his grandmother’s kitchen tablecloth with step-and-repeat fauna (now imposed onto a utilitarian parka) and his aunt’s corrugated iron fence (now imposed onto a grainy crepe).

Elevated casuals and hand-made staples serve as a reminder of the creativity that is inherent in Thebe Magugu’s people. He looked at the three biggest institutions in Kimberley that have shaped him – family, education and faith; cues found in the collection’s sharp tailoring that reference various uniforms, and the idea of ‘Sunday Best,’ found within the more feminine, pleated styles. A leather shopper emblazoned with the label’s new ‘sisterhood emblem’ by Commission Studio, is stitched and braided completely by hand. The entire collection was created in South Africa. 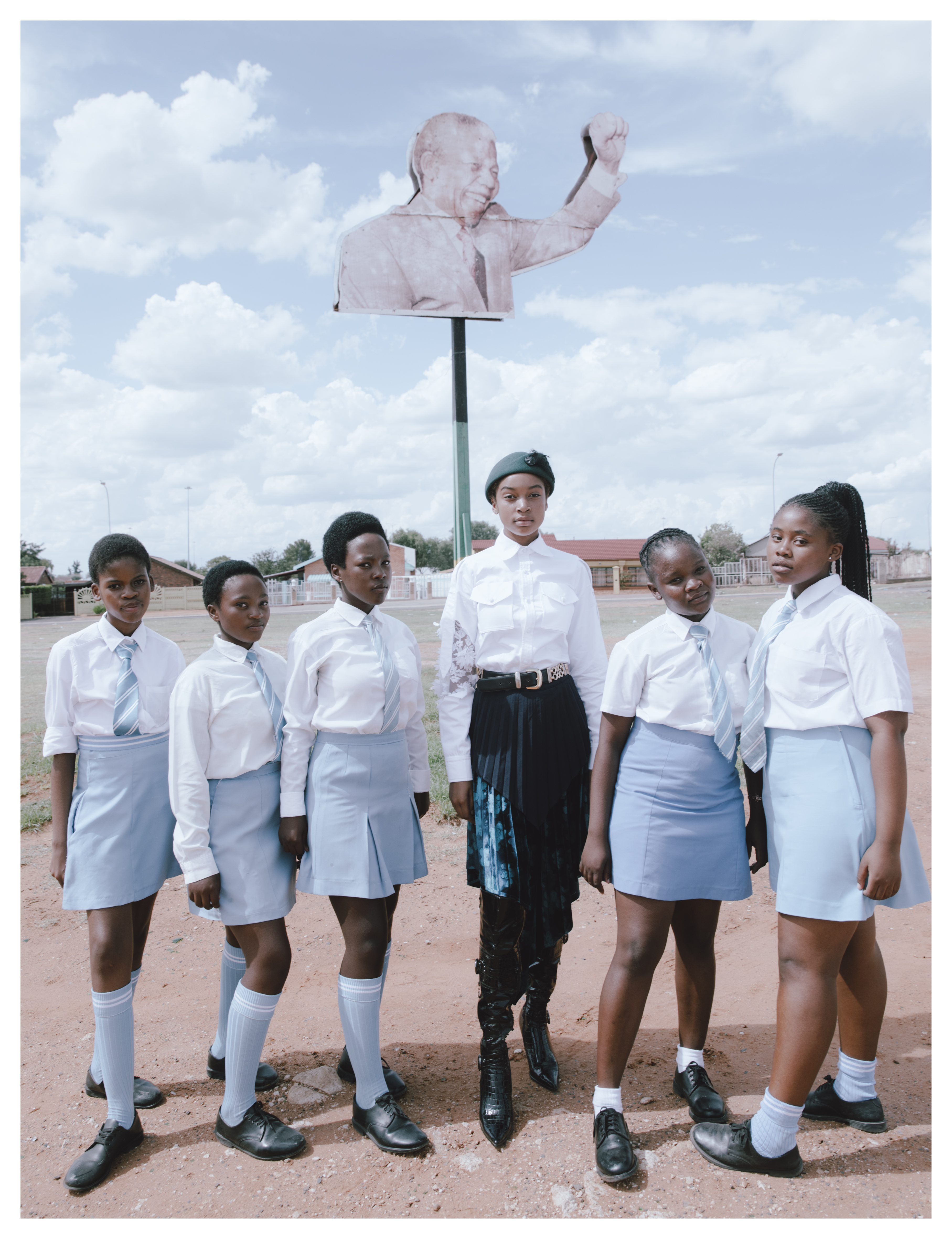 The image series was shot by fellow South African Kristin-Lee Moolman and stylist Ibrahim Kamara,  both of whose work feels abnormal yet familiar, elevated yet approachable – very much like Kimberley. Dr. Erica De Greef, Thebe Magugu’s fashion theory lecturer and friend, packaged the project within a curatorial framework. 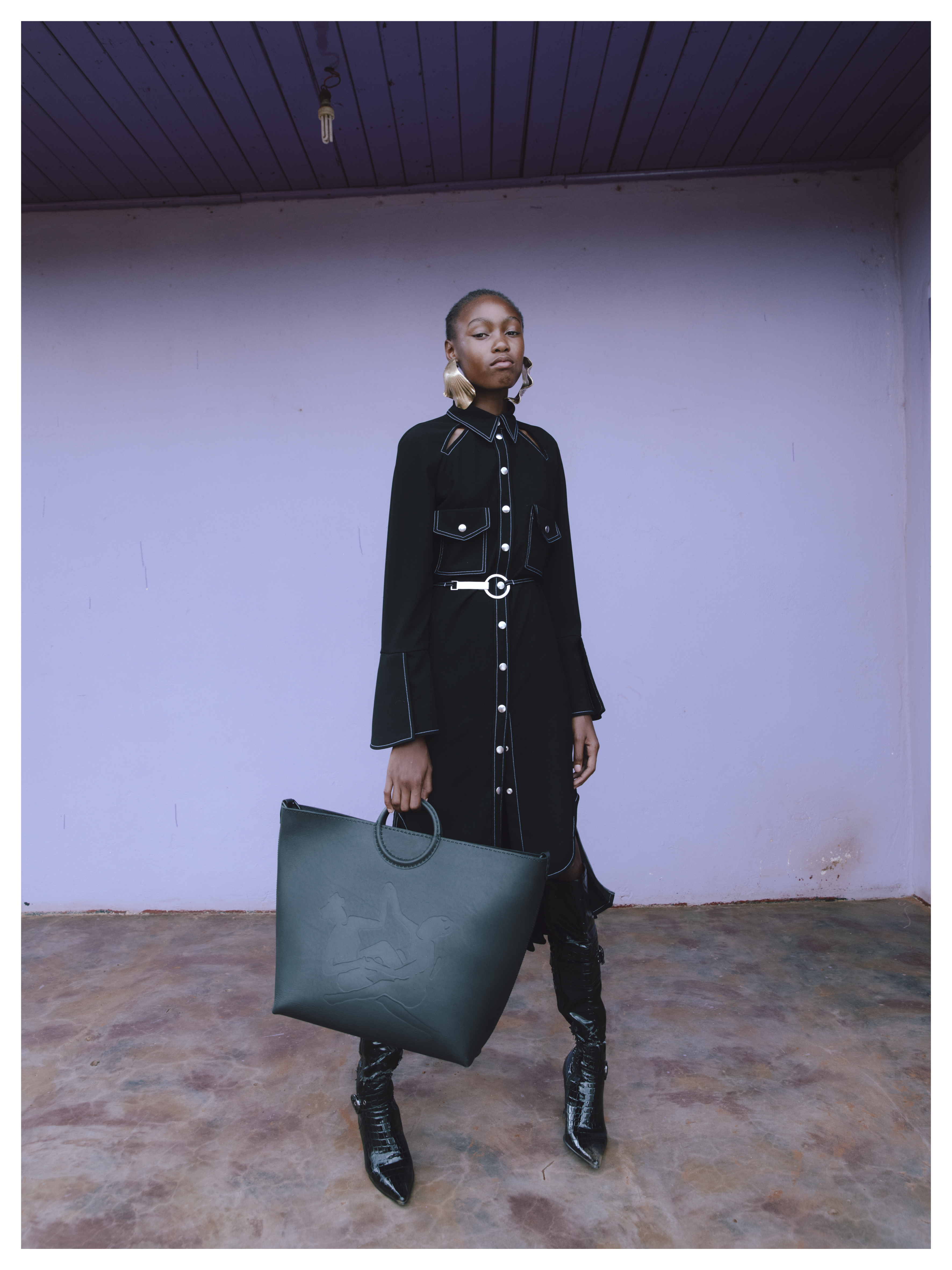 Beautiful, brave and poignant studies invite us to share in the ongoing magic of Thebe Magugu’s childhood, where his everyday life, longings and dreams are intrinsically interwoven with his fantastical futures, exploring the memories of those significant institutions that shaped him. Family. Education. And, Faith. Thebe Magugu weaves the past and present, blurs the real and imagined, and mixes magic with the mundane. As part nostalgia and part activism. As part memory and part prophecy.

The collection reflects his Ipopeng. They re-imagine it as striking, dramatic and important. The photographs also demand attention from a world that easily forgets. – Dr. Erica De Greef 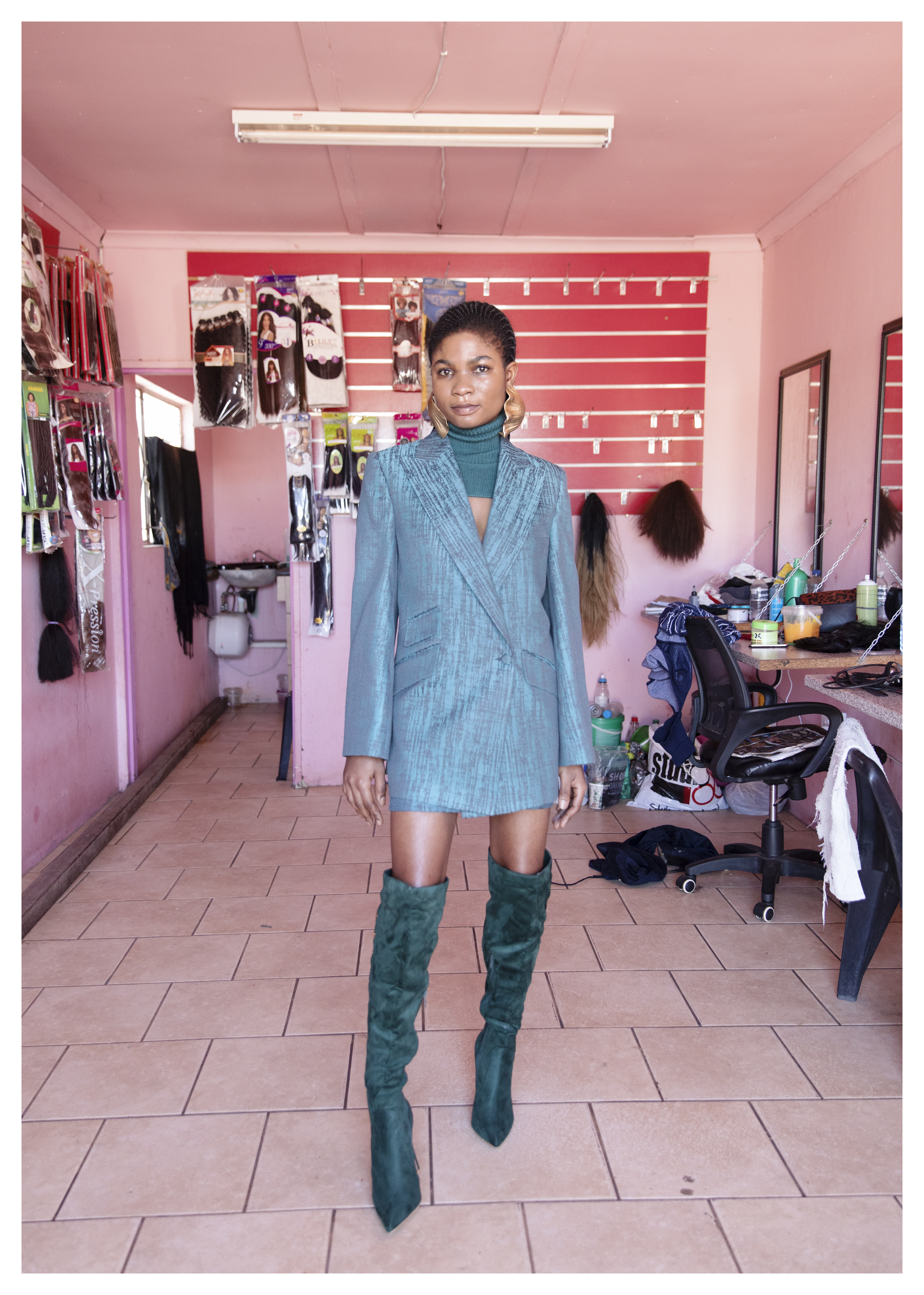 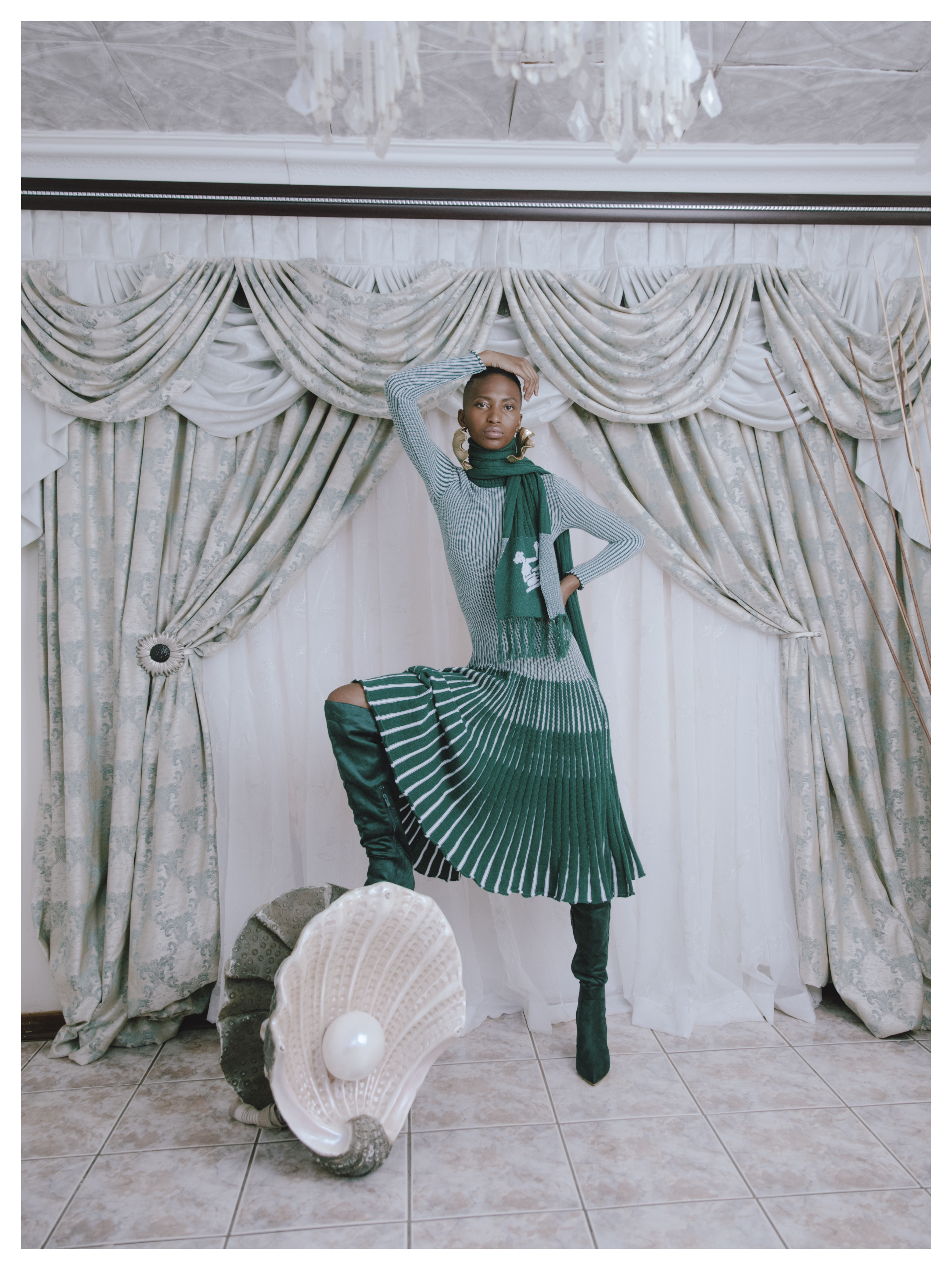 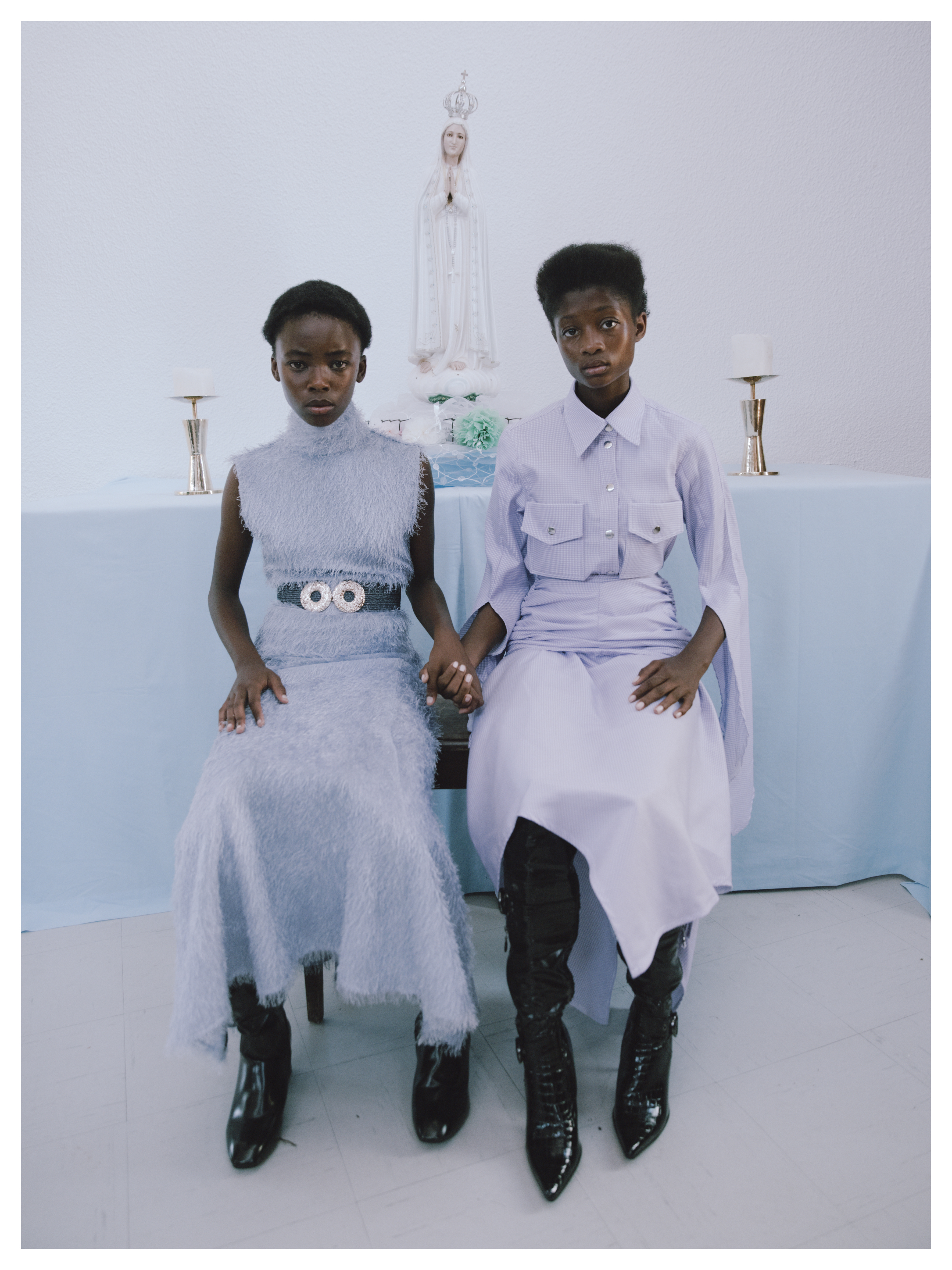 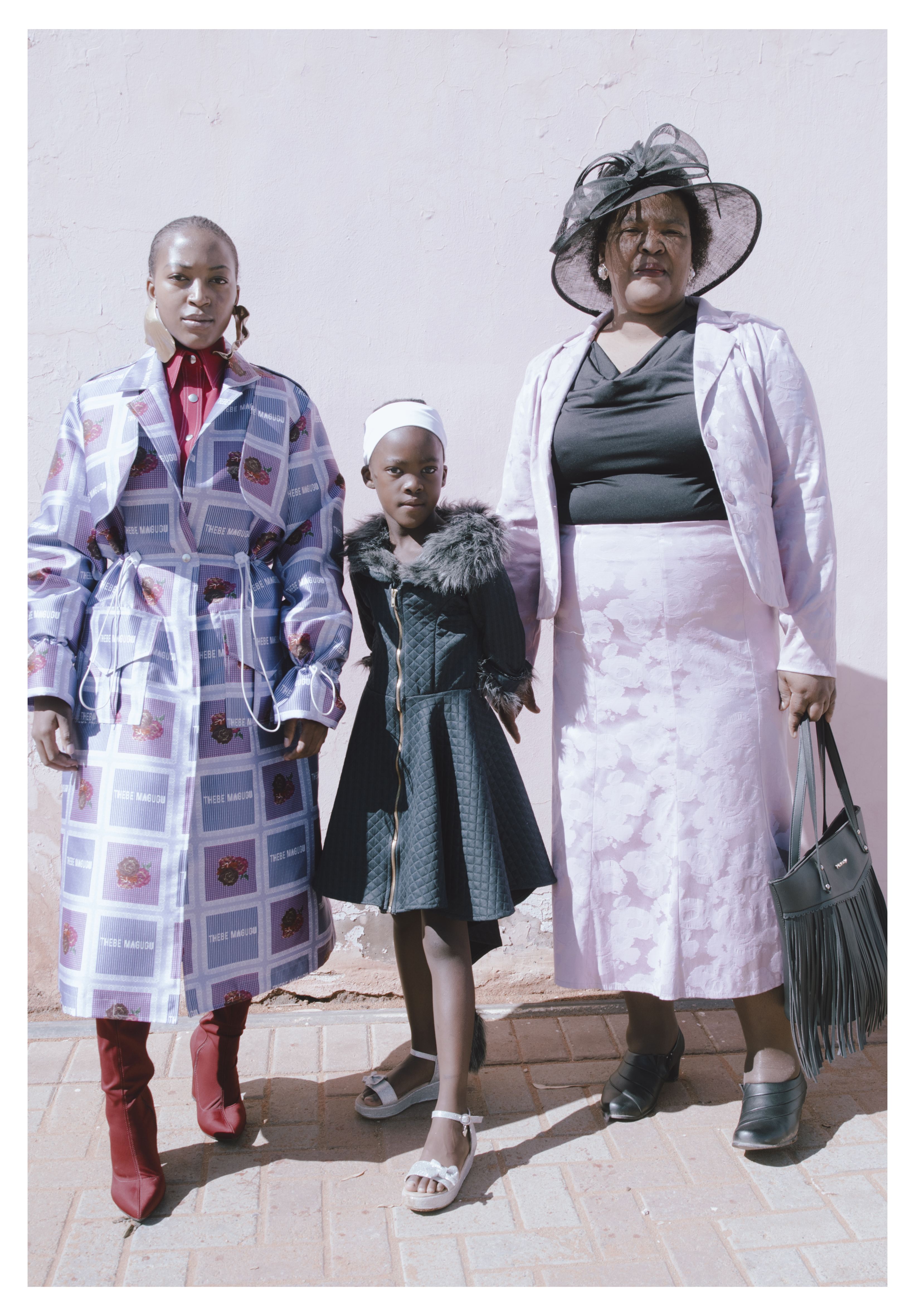 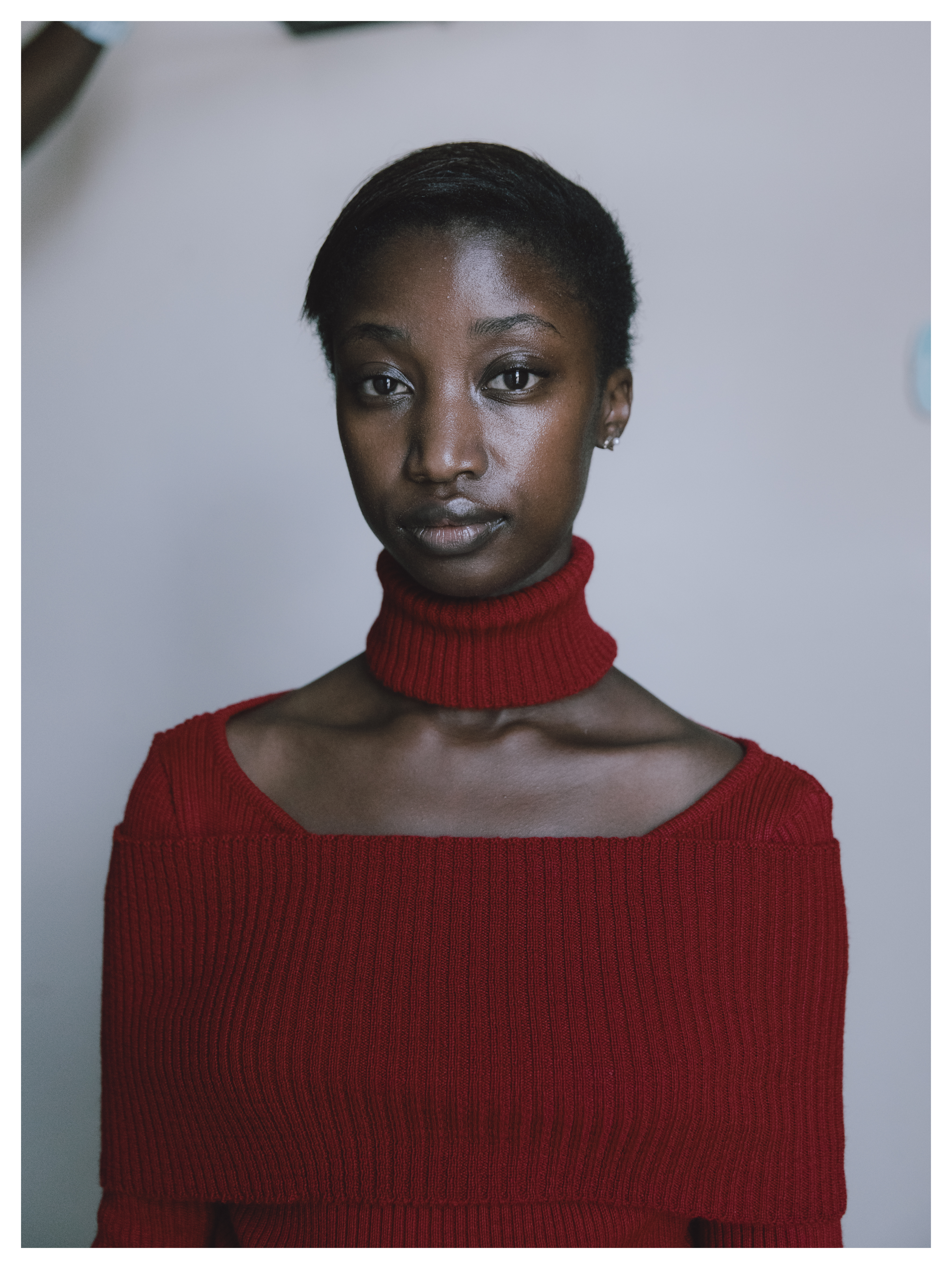 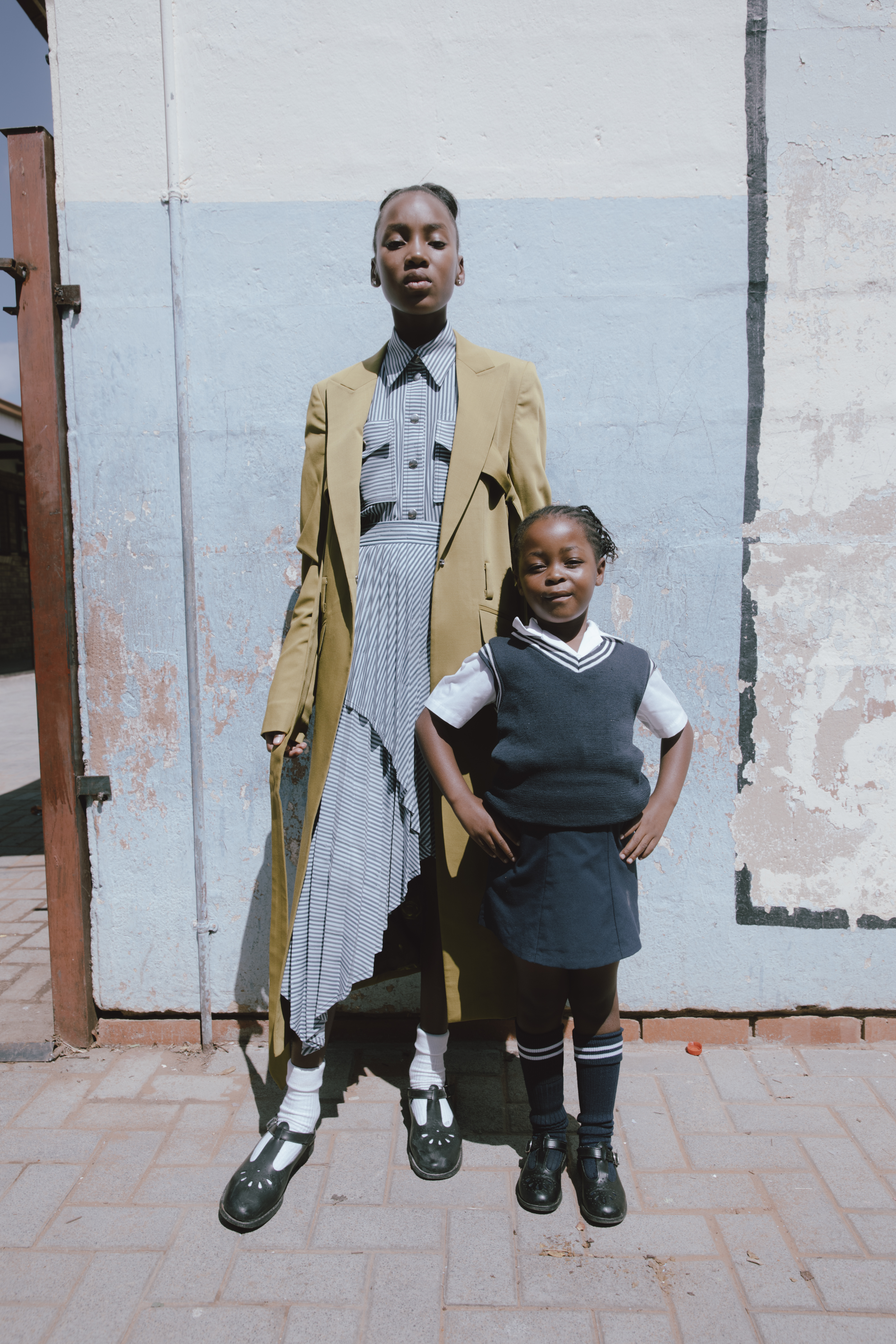 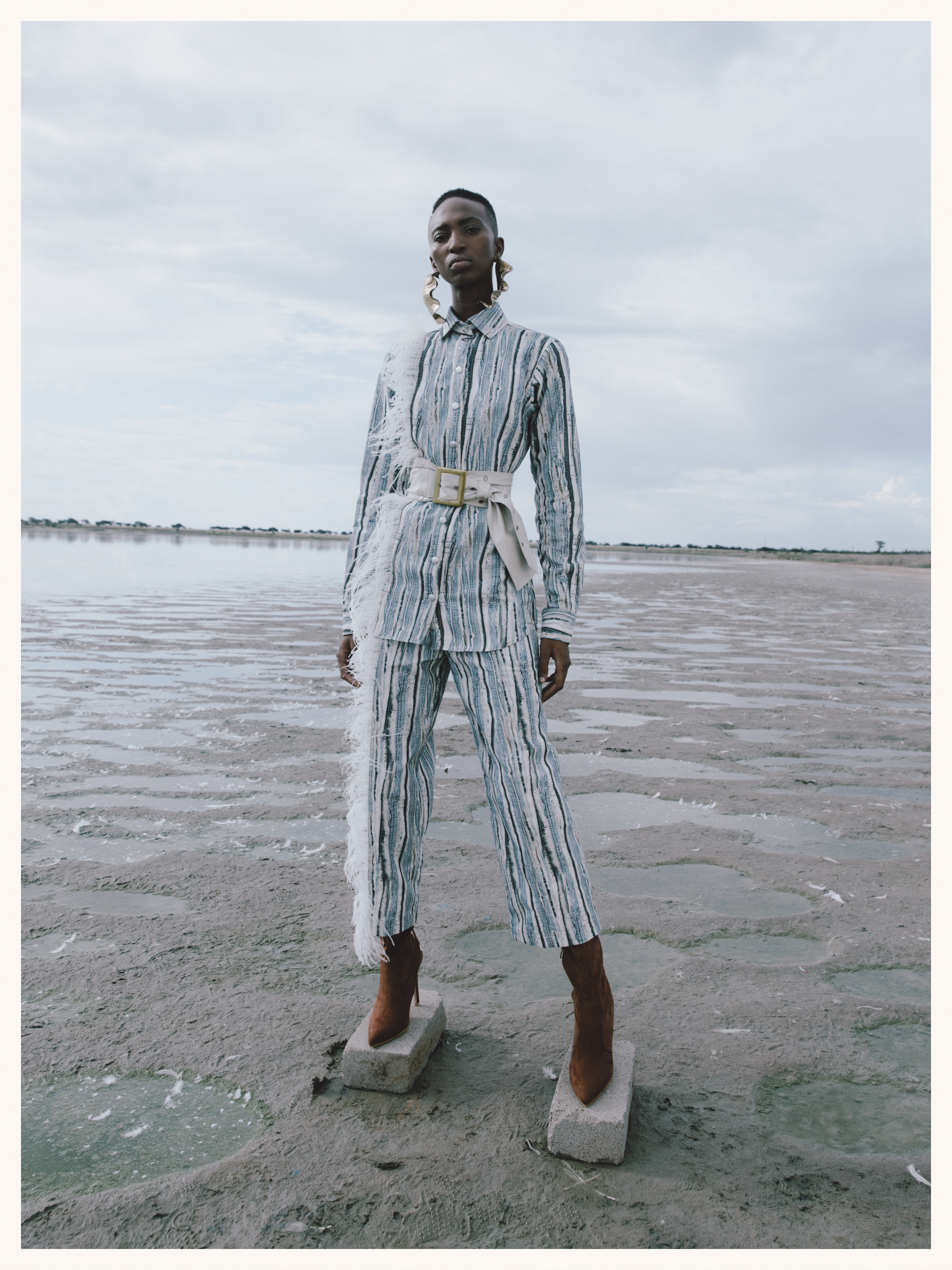 A catalogue of the full image series showcased at Thebe Magugu’s IPOPENG EXT. exhibition will be available for purchase at Palais de Tokyo from 27 February 2020.