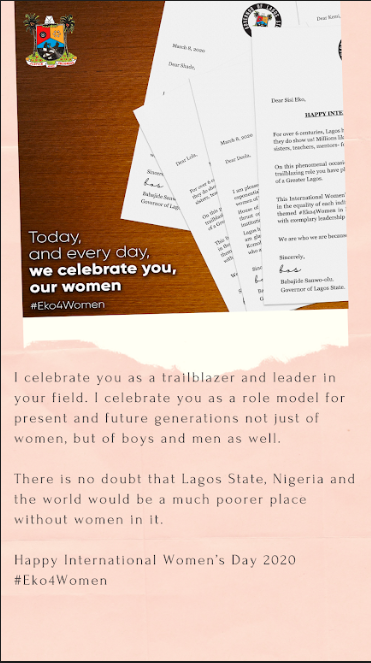 On International Women’s Day 2020, Governor Babajide Sanwo-Olu rolled out the first in a series of initiatives under the #Eko4Women campaign to commemorate this year’s celebration themed, #EachForEqual.

Governor Sanwo-Olu honoured the women who played significant parts in the history of the state through an animated #Eko4Women video which was published on March 8th, 2020 via the Governor’s official Twitter page.

The one-minute video paid homage to legends such as Efunroye Tinubu, Funmilayo Ransome-Kuti, Alimotu Pelewura, and Ajoke Ahmed, among others — highlighting the contributions of these women to the Lagosian values we hold dear today.

Today, we honour and celebrate our women.

The women of Lagos have taught us bravery, wisdom, resilience and unimaginable strength. The role you play in the evolving story of a greater Lagos can never be underrated.

The powerful narration spoke directly to the women of Lagos, saying “we never forget the trailblazing role you have played, and continue to play in the evolving story of a Greater Lagos”.

In a continued demonstration of the festivities surrounding International Women’s Month, the Governor sent personalized letters of recognition to 200 women across the state. The diverse selection of women featured change makers and thought leaders within the corporate, creative, development, and governance sectors. Some of the notable personalities who received Governor Sanwo-Olu’s appreciation include Abah Folawiyo, Opral Benson, Joke Silva, and Taiwo Ajai-Lycett.

I’m incredibly honored to receive this International Women’s Day recognition from the Executive Governor of Lagos State, Mr. Babajide Sanwo-Olu @jidesanwoolu (who doesn’t want to be referred to as ‘His Excellency’). Thanks for all you do for the state and to support women. I’m hanging this on wall at the office right away. ? #eachforequal #iwd2020 #eko4women

‪Thank you @jidesanwoolu for this #IWD2020 gift. I’m incredibly honored to be acknowledged this way.‬ ‪Here’s hoping that you and Lagos join us in the continuous fight to achieve gender equality in Technology, Lagos State and across Nigeria. ‬ ‪Thank you!‬ #eko4women

Say what you like , whatever your political leanings … this is SOLID PR !! Whhaaat! ?This is why I Praise Lagos State and it’s leadership in Beyond My Dreams ! I appreciate this recognition AT HOME .. It’s an honour to be recognised as a value adding citizen of Lagos State . Thank you Your Excellency @jidesanwoolu and the excellent team behind this . Check out the personalised “Dear Jumoke “ ??? and the scarf ? #ekoforshow !! ?? #ekoforwomen . #iwd2020 #iwd #internationalwomensday2020 #internationalwomensday

#latergram ?What a lovely surprise and acknowledgement from The Governor of Lagos State! @jidesanwoolu ??✨as he expressed appreciation for my constant portrayal of strong and independent women in my movies as a catalyst for development in honor of #IWD2020 As I was born and brought up in Lagos although I’m proudly Bayelsan, it’s a huge honor that I cherish dearly. May all our gifts open doors for us and bring us before great men and women my #dakoredarlings❤️? Proverbs 18:6 #Eko4women #Ekoonibaje #eachforequal #heforshe #celebratingwomen

So much to celebrate! Most essentially being a woman in such a progressive environment in a dress made by my daughters @clanrtw! ?? @jidesanwoolu #Eko4women #Generationequality #IWD2020 #LagosState #ekoonibaje

@jidesanwoolu I am truly honoured for this kind celebration! . It is so nice to know that in just ‘doing my job’, which I do really enjoy, that i and other women are noticed. . It really does make it more fulfilling. ?? . . . #eko4women #iwd2020

…. and so LASG gets it right as @babajidesanwoolu says "Lagos, Nigeria and the world will be a poorer place without women in it". PREACH… . . . . #AdesuwaOnyenokwe #IWD2020 #equalforequal #eachforequal #womensdays2020

A special thank you to the governor of lagos state @jidesanwoolu for this humbling recognition.. thank you for celebrating me and many hard working women who are constantly changing the narrative. ⠀⠀⠀⠀⠀⠀⠀⠀⠀ I’m super elated and above all grateful.. ?? . ⠀⠀⠀⠀⠀⠀⠀⠀⠀ #eko4women #iwd2020 #eachforequal #thankful #gratefulheart #lagosstategovernment

Thank you so much Mr Governor (@JideSanwoolu) for this message celebrating International Women’s Day and recognition of the achievements women are making in Lagos State. It means a lot to us @stylehousefiles @lagosfashionweekofficial @shftrains , where majority of our initiatives are led and run by women who have been instrumental in putting Lagos on the global fashion map. #iwd2020 #eko4women #generationequality

Imagine our complete surprise when we received this from the Governor of Lagos State, @jidesanwoolu . Our business is built completely out of love and the passion we have to serve. Getting recognized for being a trailblazer in the dessert industry and putting our signature product ‘Gelato’ on the map, is a truly rewarding experience. We would like to say a big thank you to the Governor and @lagosstategovt for this recognition and our contributions to the growth of the State and empowerment of women. We are humbled. The people who change the world are the ones who do so. As women, let us go forth and change the world! #eko4women #hansandrene #IWD2020

The role of women in the quest for a progressive Lagos cannot be overlooked, as the Governor noted in his letter: “There is no doubt that Lagos State, Nigeria, and the world would be a much poorer place without women in it”.

S U R P R I S E!!!!!! Having a sense of wonder is a GIFT . Arrived from Asaba after the Delta Talent development summit thanks to the governor of Delta state for the platform and now to the office and viola… A recognition from the Governor of Lagos state @jidesanwoolu for the work that we do at House of Tara. Excerpt from the letter : “Thank you for empowering thousands of women and men through the House of Tara brand “ #Eko4Women BTW ignore the accent ?it’s my “I am talking to the Governor voice “

What an honour it is to receive this plaque of acknowledgment and appreciation. I’ll like to take this opportunity to say a huge thank you, to our Lagos State, Governor @jidesanwoolu. Many many thanks for the unexpected recognition. God bless you #Eko4Women

So the story of my shoes .. I have to tell you @qbcoolbespoke is a genius .. I needed shoes that were comfortable cuz I stand all day and this man hooked me up. The shoes feel as plush as stockings and yet inside I the get the support I need . I pretty much never buy any other shoes .. like never ..so for almost five years it’s been @sisiano and @qbcoolbespoke every single day .. almost ?.. y’all should really check him out . He’s an incredible and uncommon business human .

Thanks to Lagos State Governor @jidesanwoolu for honouring our Founder/CEO @uchepedro on International Women's Day 2020. We appreciate the kind words. #IWD2020 #IWD #Eko4Women

#Eko4Women is Governor Babajide Sanwo-Olu’s celebration of the legacies pioneered by visionary women throughout the history –past and present – of Lagos State. The Greater Lagos narrative must be owned by each individual – from the high flying madam, hotshot executive, enterprising market woman, to the rosy-cheeked schoolgirl and every woman in between. We “celebrate you for who you are and what you do, day after day, to make the world a happier and more equitable place”.
————————————————————————————————————————————————————————————–
Sponsored Content

How can You leave a Lasting Footprint in Your Community? Join the EiE #OnePerson Campaign Today