Everything We Know About 19-Year-Old Activist Oluwatoyin Salau's Murder 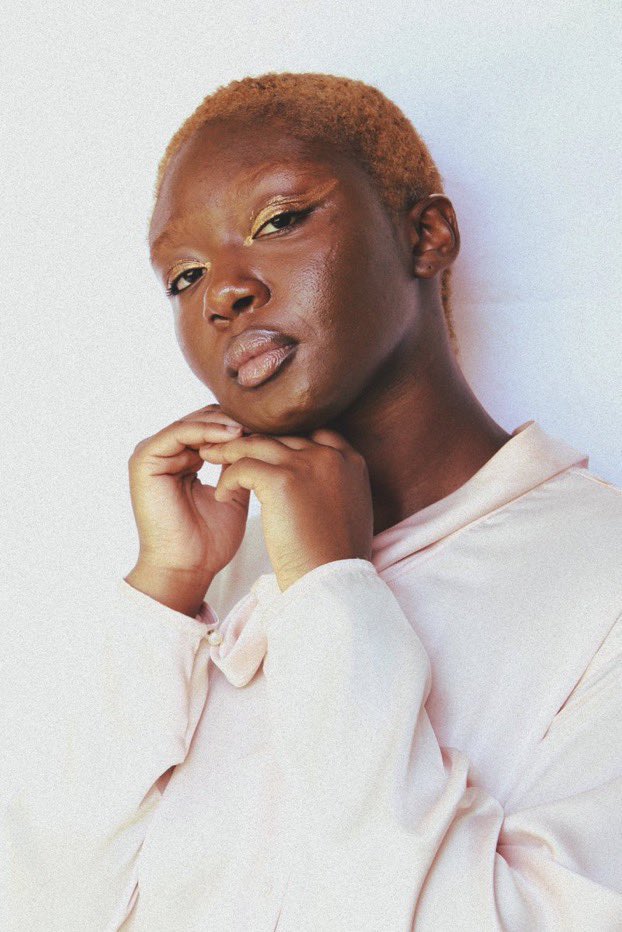 Oluwatoyin Salau, a Nigerian-American activist was reportedly murdered days after she tweeted about being sexually assaulted by a black man who offered her a ride, after attending a Black Lives Matter protest in Tallahassee.

She was found dead on Saturday night, June 13, alongside an AARP volunteer, Victoria Sims, 75. Both women were reported missing before being found dead around 2100 block of Monday Road in Tallahassee. 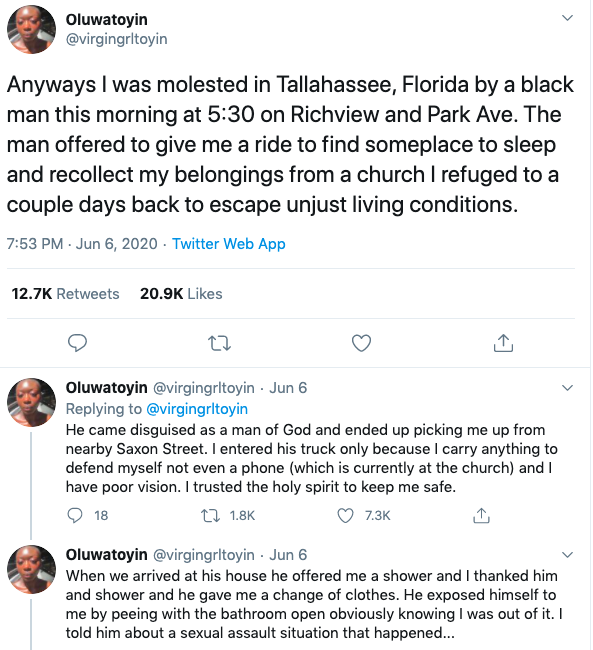 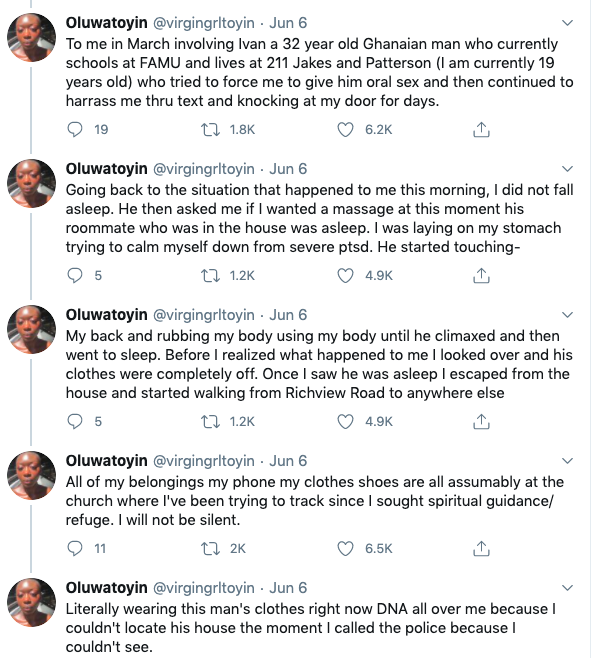 A suspect has been arrested

On Sunday, the Tallahassee Police Department has arrested a suspected identified as, Aaron Glee Jr., a Florida man with a long criminal history for domestic and other cases.

The suspect, Aaron Glee Jr., has been taken into custody, police said in the press release.

The Nigerian government, activists, celebrities are demanding justice for the murder of Toyin:

Abike Dabiri-Erewa, the chairperson of Nigerians in the Diaspora Commission (NIDCOM), has weighed in on the alleged murder of Toyin, describing her death as highly depressing and cruel.

She made this known in a statement signed by Abdur-Rahman Balogun, Head of Media and Public Relations Unit of NiDCOM.

ALLEGED KILLING OF TOYIN SALAU IN THE US, DABIRI-EREWA CALLS FOR THOROUGH INVESTIGATION

In the US as highly depressing and cruel.

She, therefore, urged the US government to conduct a thorough investigation on the circumstances leading to Miss Salau’s death. Nigerians in Diaspora Commission. The NIDCOM boss condoled with the immediate family of Ms Salau who died while advocating against oppression and injustice.

Toyin Salau, a 19-year-old lady of Nigerian origin, was found dead days after she was declared missing in the city of Tallahassee, Florida, the United States. According to the Tallahassee Police Department, Toyin, who spoke at Black Lives Matters protests in the city, was last seen June 6 near Wahnish Way and Orange Avenue, Tallahassee.

Salau was declared missing hours after she tweeted she was sexually assaulted.

Toyin tweeted that a man molested her that morning around Park Avenue and Richview Road, Tallahassee, Florida. She said the man offered to give her a ride back to a church where she had sought “refuge” because of “unjust living conditions.”

“He came disguised as a man of God and ended up picking me up from nearby Saxon Street,” she tweeted. “I trusted the holy spirit to keep me safe.”

According to reports, the Tallahassee Community Action Agency conducted a search party on Wednesday night, starting at Bethel AME Church.

The demonstrators searched for hours. They carried flashlights and asked for medics to join them in case she was hurt. Salau on June 15, after a week of her abduction, was found dead. Before her confirmed death, she was very passionate about government policies, fighting racism and other issues affecting the society.

Heart-wrenching. Oluwatoyin Salau used her voice to fight for the Black community and speak out against injustice. She was only 19 and had her whole life ahead of her.

We must do better to protect Black women and value their lives. #JusticeForToyin https://t.co/WUPb5hpYqT

#JUSTICEFORTOYIN THIS SHOULDNT BE HAPPENING IN THE "LAND OF THE FREE" FOR FUCKS SAKE https://t.co/ZYfRAmX9UZ

Oluwatoyin Salau. Killed at 19 after speaking up about being sexually assaulted. A vocal and powerful voice in her community for #BlackLivesMatter. Black Women deserve protection and justice, just like everybody else. #JusticeForToyin #SayHerName pic.twitter.com/1FFiDG1UBC

She was 19. 19. 19. A baby. Oluwatoyin "Toyin" Salau was a 19 year old warrior who fought for US. She reported her sexual assault to police and days later was found murdered. The horrors she faced, the trauma she endured, all by 19 years old. Who cares for little Black girls, Black teens, Black women? Toyin deserved so much more. She fought for so much more for all of us. I can't shake it. I am her and she is me. I am alive to talk about surviving my rape at 19. She is not.. The work continues. The fight continues. The reckoning will continue. Toyin should be here. She was 19. A baby. Hold our babies tight. Love them. Protect them. Support them. 19. #BlackLivesMatter #AllBlackLivesMatter #JusticeForToyin

#JusticeForToyin: She spent the last days of her life fighting for justice for her people. It shouldn't be lost on us that Black Women have been at the forefront of these Movements. We have to stand up against violence happening to our Black Women and Girls. God Bless her soul. pic.twitter.com/SeJ43b7n6y

Black women fight so many wars without the luxury of choosing which one to prioritize.

This is a white woman talking honestly about her experiences and its one of the best threads on the criminalization of Black people that I’ve read lately. https://t.co/l2AQJbB7I1

When I was 15, I was chased through a mall by police who were yelling “Stop thief!” I had thousands of dollars of stolen merchandise on me. I was caught, booked, sentenced to 6 months of probation, required to see a parole officer weekly. I was never even handcuffed.

This is so frustrating.

19-year-old Black Lives Matter protester Oluwatoyin Salau who went missing moments after tweeting that a man who offered her a ride to church had molested her; is one of 2 women found dead this weekend in Florida. #JusticeForToyin pic.twitter.com/mwGMu4Cnbj

Schools will Reopen if These Conditions are Met