In this Observer Magazine, cover shoot TV girl, producer and all-around creative Issa Rae is lauded as the golden girl, who started as a comedy outsider, now she’s Hollywood’s hardest-working star. The Emmy-nominated and Golden Globe-nominated actress speak to Observer Magazine about her upcoming HBO film “Coastal Elites“, being the booked and busiest, the importance of legacy and more. Her hit HBO show, “Insecure”, has indeed transformed her into the patron saint of black millennial creatives.

In the magazine, she shared how story growing up in Senegal and LA. Being “too black for white kids, too white for black kids”.

She grew up middle class, her father a Senegalese paediatric doctor and her mother a teacher. In childhood, her family moved a great deal, first to the primarily white suburb of Potomac, Maryland, then to Senegal, until they finally settled in LA. Issa was in the sixth grade then – an 11 year old. She was one of the only black girls in her elementary school in Potomac and then the only American girl in her elementary school in Senegal. She struggled to belong in each setting. When she started at a school in LA, attended by predominantly black and Latino students, she found herself the subject of the ballad of many black middle-class teens – “too black for white kids, too white for black kids”. When Tupac died in 1996, she attempted to find common ground with her mourning classmates and mispronounced his name, becoming a social pariah in the process.

Read some excerpts from her cover feature below: 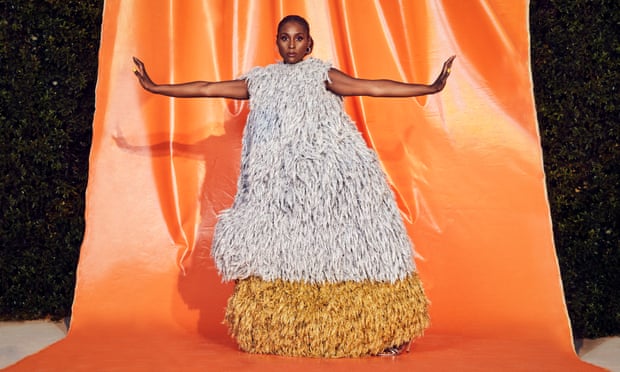 “It is a compliment and a burden that people take so much ownership over the show,” Rae says, “because there aren’t a lot of shows about us, so people feel like you have to tell all the stories that can be told, and if you don’t you’re failing us.”

On how sharing a name and face with her character on “Insecure”, has made privacy a priority.

“People have a lot of shit to say and I just don’t want it to be about me, unless it’s talking about my work,” she says. “People fill in the blanks about my own life because of the characters’ choices, but I’m fine with that. As long as it’s not my real shit and it’s wrong then talk away!”

On the upcoming film “Coastal Elites”.

“I actually had never heard the term ‘coastal elite’ until this movie so I’m just like, “What does this mean? Oh OK, it’s me.” Rae and her character, Callie, both live in LA, and they’re both “outraged by the current administration”.

“You see so much of the concentrated fuckery of this current president in one place,” she says. “Hopefully you’ll watch the movie and say, ‘This is not normal. I should be upset, I should be outraged.’ Satire or not, we’re living in this and to accept this is to be part of our own destruction.”

“Do I get burned out? Hell yeah!” she exclaims. “That was why I took a break last year because I didn’t really think about how to do everything and do everything well. But it’s not just me – I get a lot of credit, but I work with really great people.” 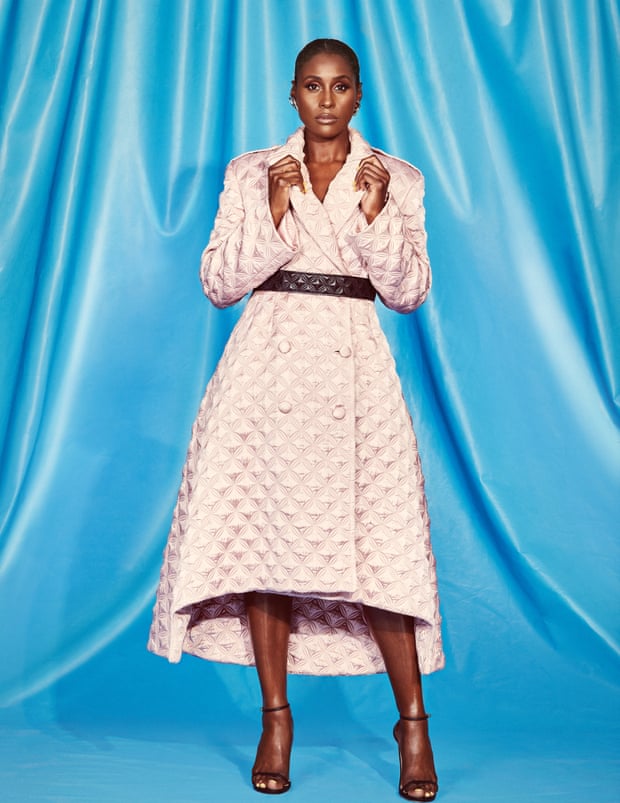 On the complicated diversity within Hollywood.

“It’s just another way to divide us, unfortunately,” she sighs. “Seeing Daniel Kaluuya in that Fred Hampton trailer, I was like, go the fuck ahead! You transformed, you’re an actor! Sometimes I’m pleasantly surprised when I’m watching white shit and I’m like, ‘Oh! The bitch is Australian? That’s so dope! I would have never known.’”

“As far as legacy is concerned, I have so much to do,” she says. “And I’m fine with that, but it definitely keeps me up at night. My feet aren’t firmly planted just yet. I’m still walking, I’m still paying my dues, in a way that I’m not mad at. I want to earn being here.”

Read the full feature at the Observer Magazine