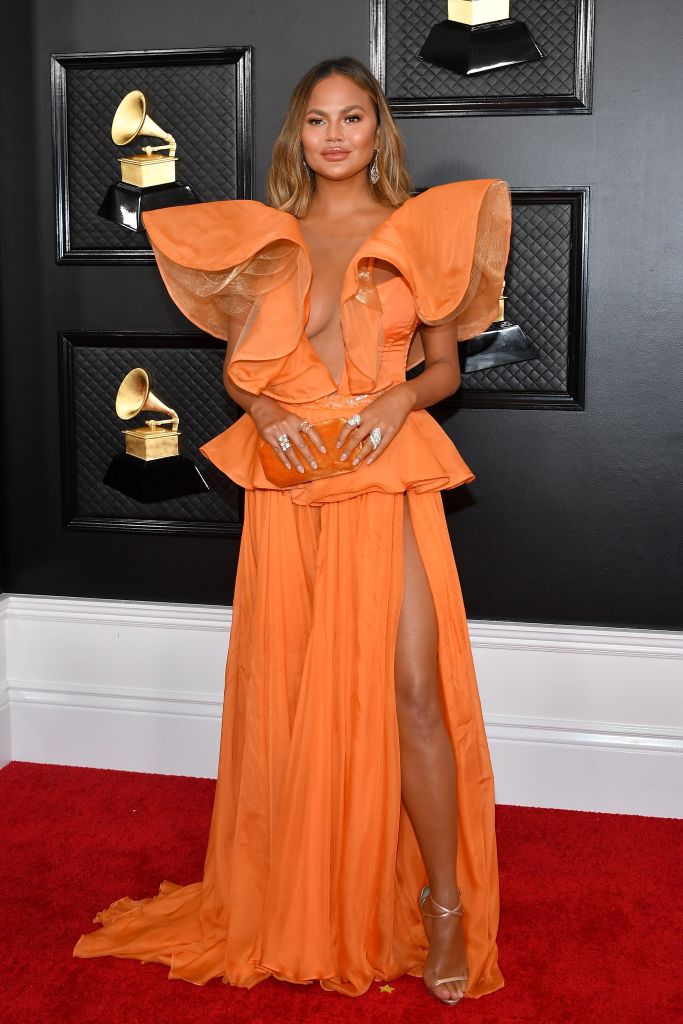 Hollywood star, Chrissy Teigen has responded to Michael Costello‘s claims of bullying with a statement on Instagram saying, “Chrissy Teigen very clearly and contritely apologized for insensitive public tweets she made around a decade ago. She did not acknowledge nor apologize for sending private messages directing or encouraging self-harm.”

Presenting several instances and screenshots as proof, the statement further says that “Chrissy is completely surprised and disappointed by Micheal Costello’s recent attack, which includes fictional “screenshots” from 2014 of supposed private messages that Chrissy did not send.”

Chrissy’s statement also says she believed she and Costello had a “cordial relationship as they had friendly online interactions for several years.”

She then made it clear in her caption that the case would go to “an actual court of law… and every dime we win will go to an anti-bullying charity” if it continued.

No idea what the fu*k Michael Costello is doing. He just released a statement where he didn’t at ALL acknowledge how fake the dm’s were, and now claims to have emails that don’t exist.

So while he conjures those up (hopefully with someone more talented in fakes this time), here. And remember yesterday how confused he was about Leona Lewis’ stylists being so kind to him in recent years? Well imagine my surprise when I have these from the past 3 years.

Please do NOT bully this man under the masquerade of defending me. I’ve taken it ALL. I’ve heard it all. I just beg for you to know the truth. Michael, you are now causing actual pain to people who are trying to better themselves. Enough. Or this WILL go further. Not here, b——ut an actual court of law. And every dime we win will go to an anti bullying charity focused on turning this shit show into a positive. I wish you peace and healing. I have some places I’ve been attending if you’d like the connects. 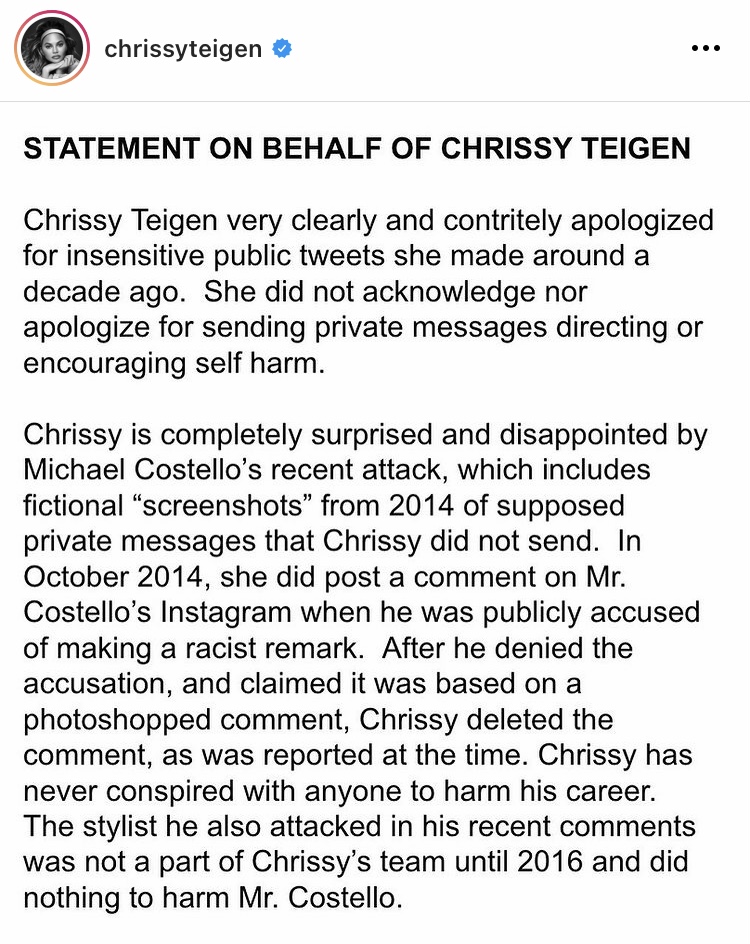 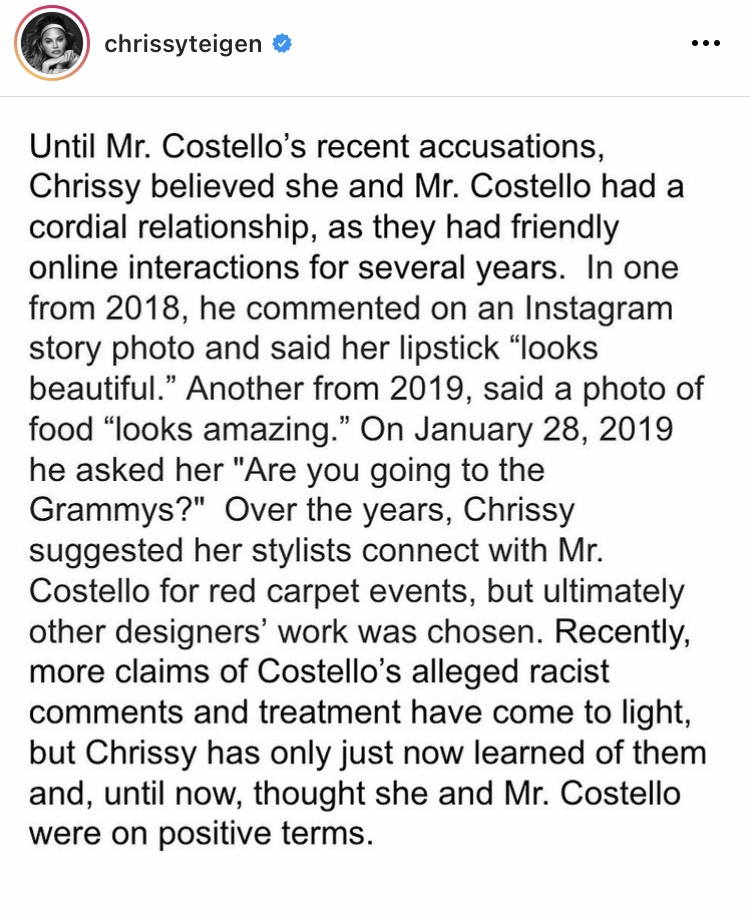 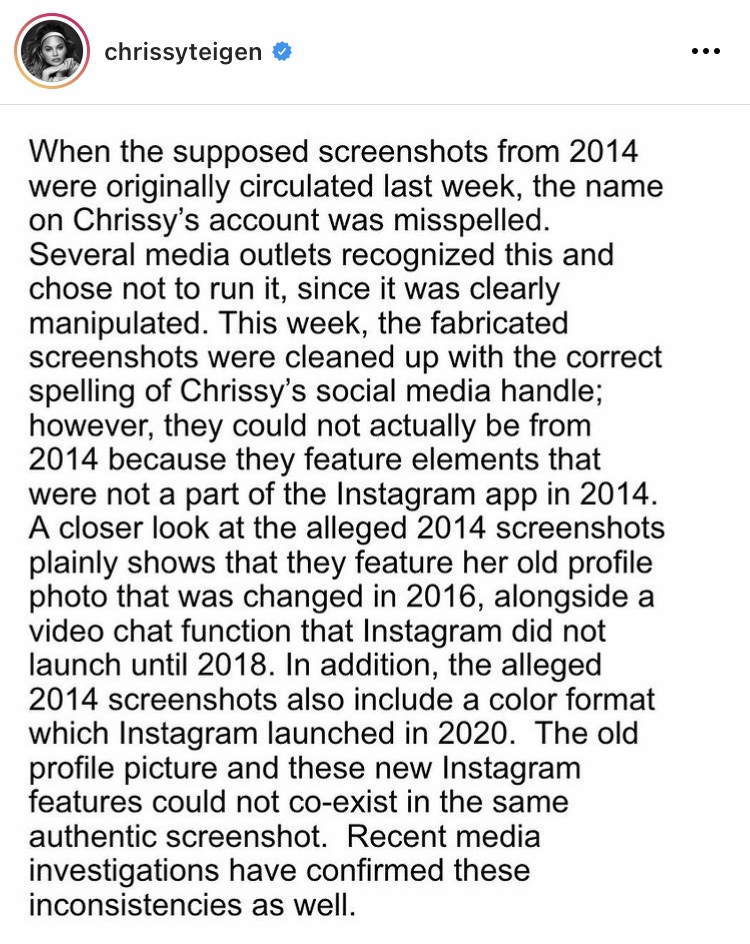 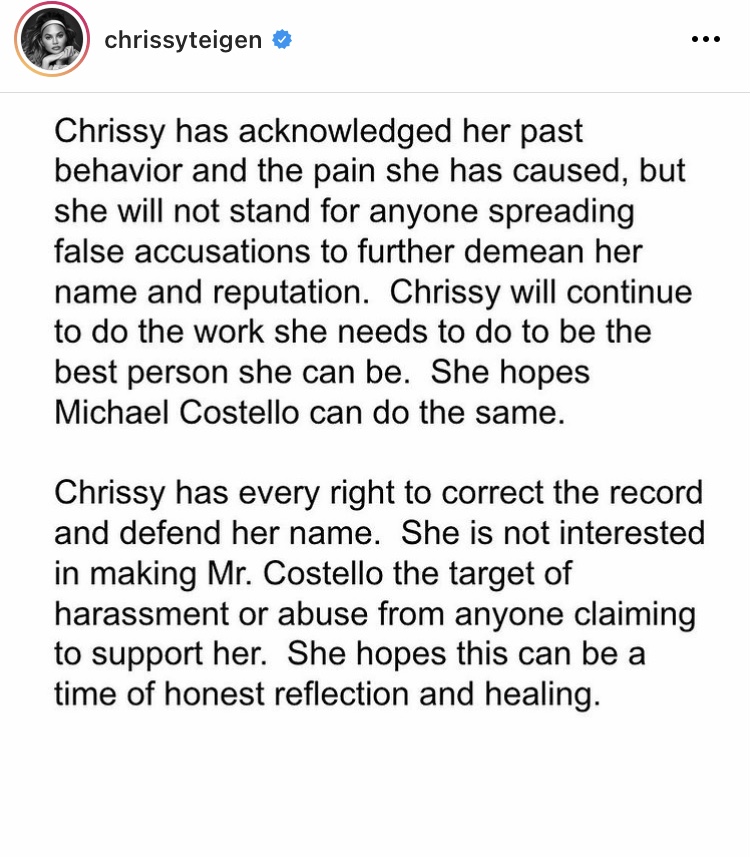 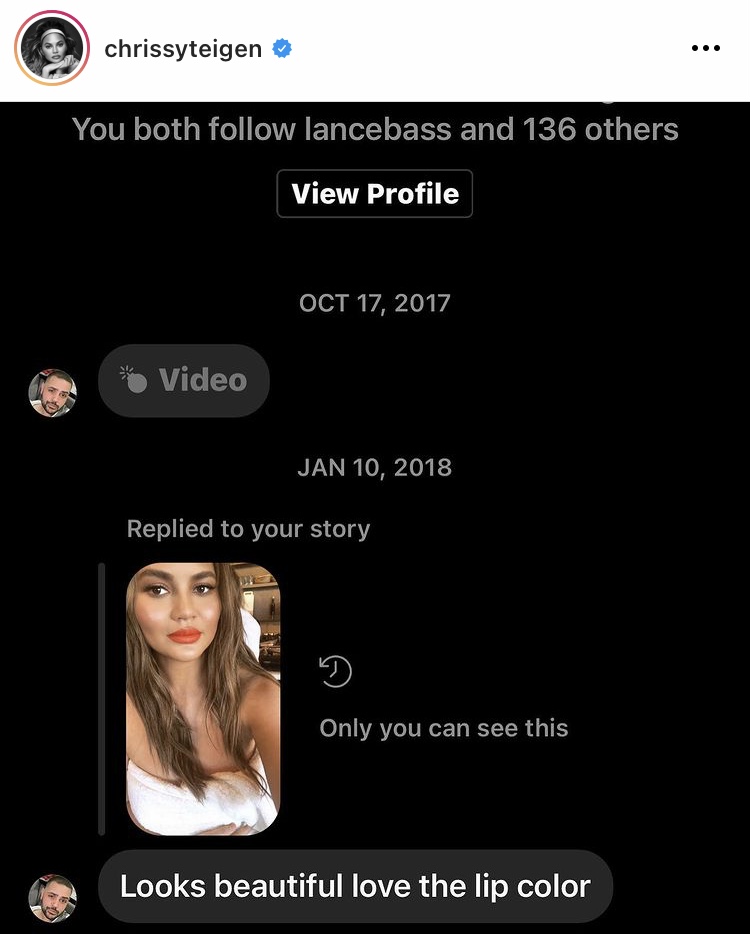 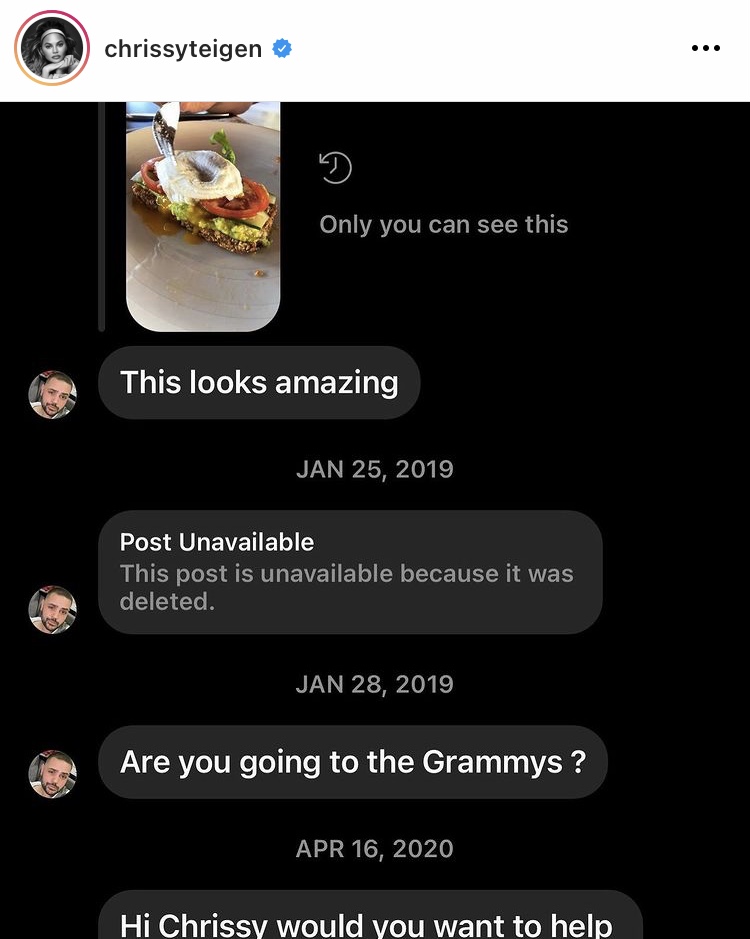 Michael Costello initially accused Chrissy and stylist Monica Rose of going out of their way to threaten people and brands against working with him, after he received public comment from Chrissy on Instagram, accusing him of being a racist in 2014.

This came a few hours after Chrissy admitted to being a troll in the past and apologised, and was followed by a statement from British singer Leona Lewis, sharing her 2014 experience with Micheal that left her “embarrassed” and with deep insecurities for years.

“He abandoned his commitments to me and the show which made me well aware that I wasn’t the body type required… Because I didn’t look like a model size, I was not permitted to walk in his dress,” she wrote. Michael reportedly apologised to the singer who accepted and thanked him for it.

After much insinuations that the chats he shared previously were false, Michael eventually responded with a final statement, insisting that “Chrissy has gone out of her way to close doors to my career by making calls, sending texts, telling colleagues and companies that if I were attached to a project that she would not work with them. I have receipts of emails and confirmations from these individuals and companies. ”

He ended the statement by saying, “moving forward, I am taking a break from social media for my mental health. I hope everyone can respect my privacy, my decision. I won’t be commenting further.”

“God bless. Also, I wish John & Chrissy nothing but peace and happiness after all this,” Michael captioned the post. 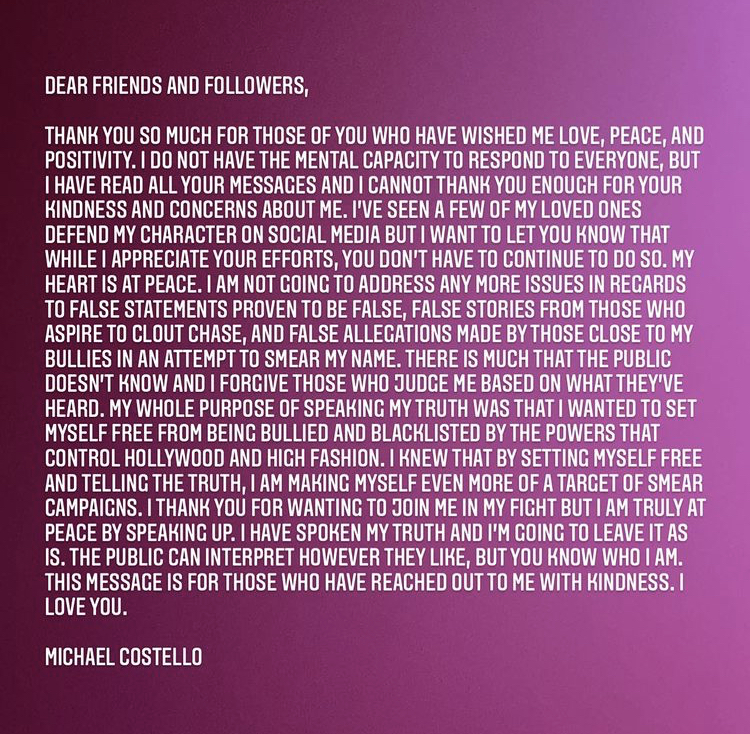 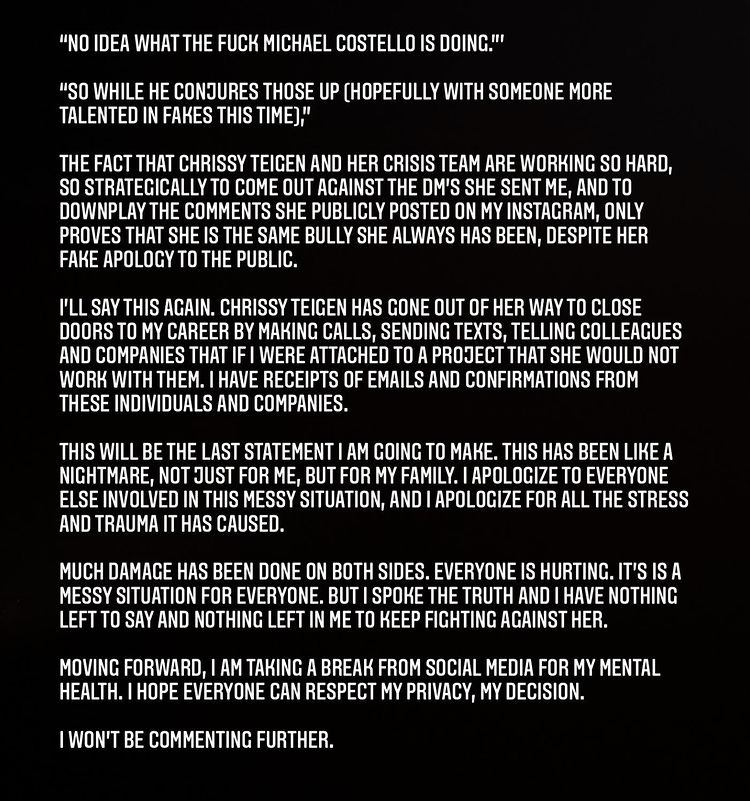 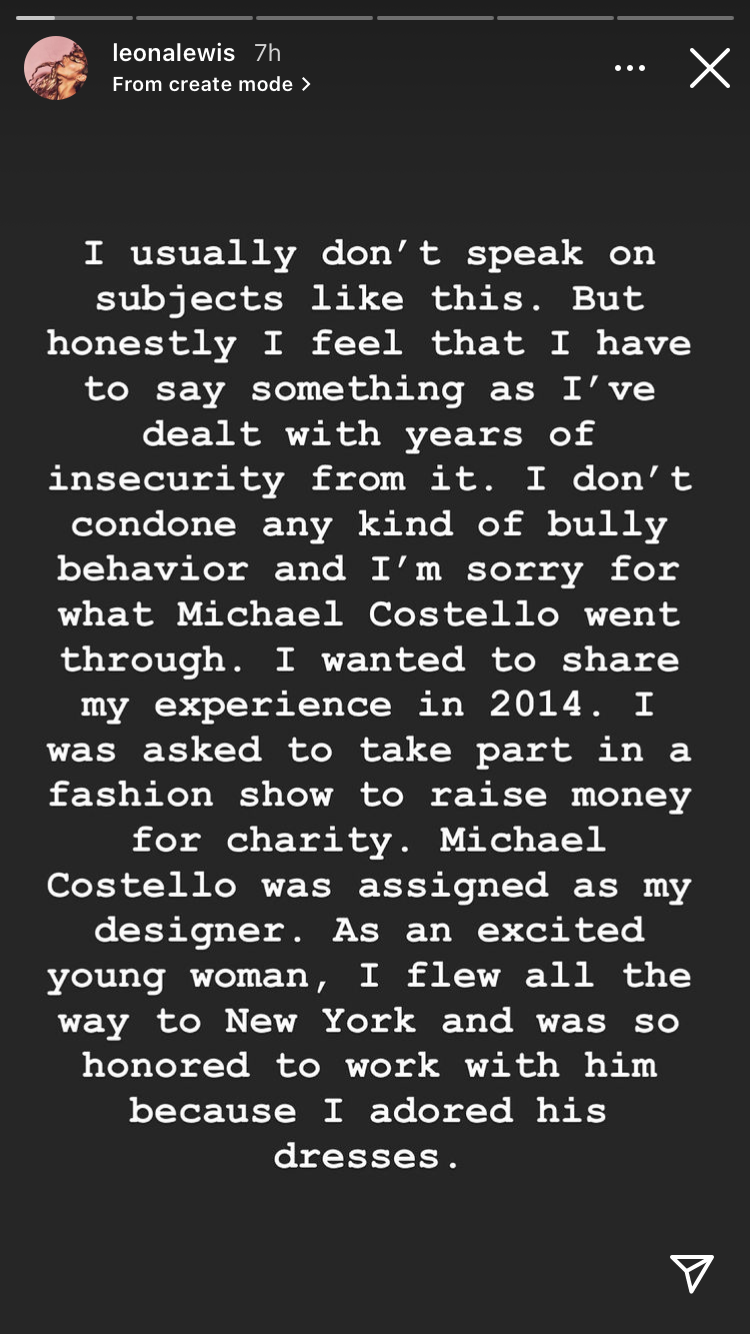 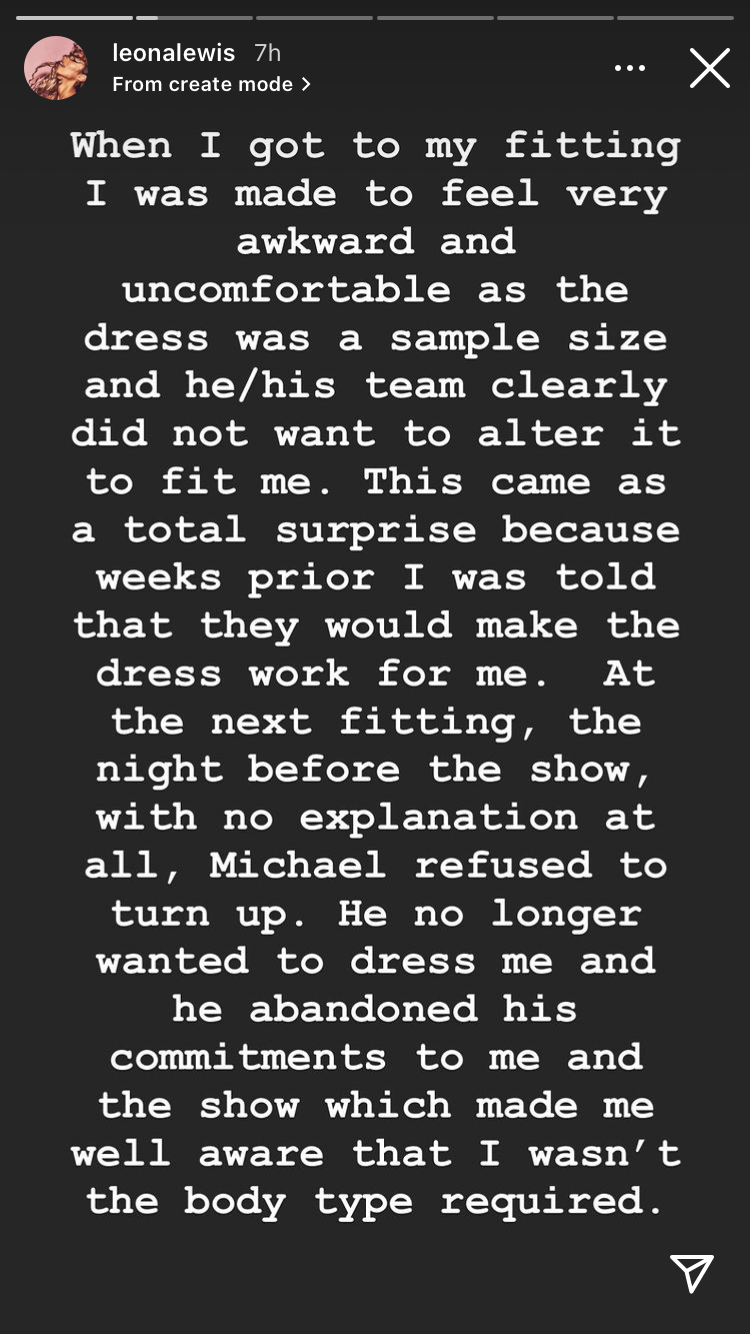 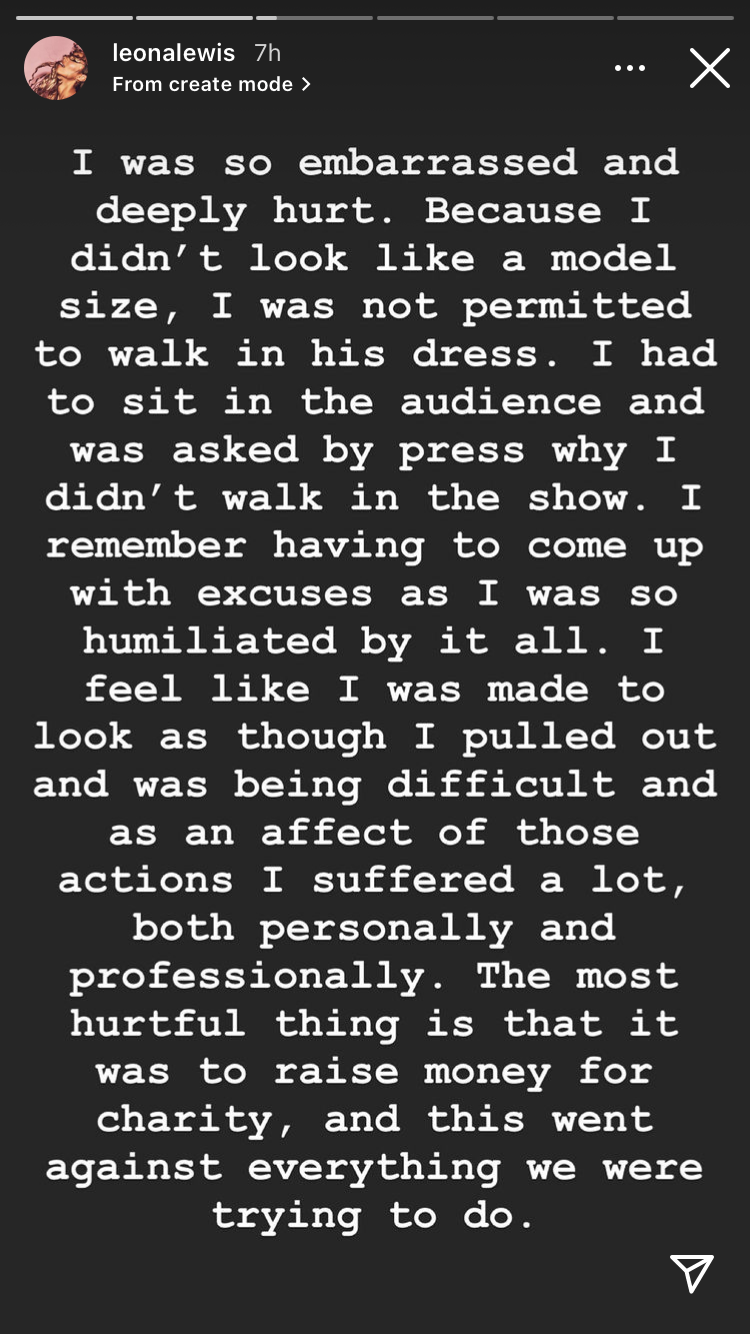 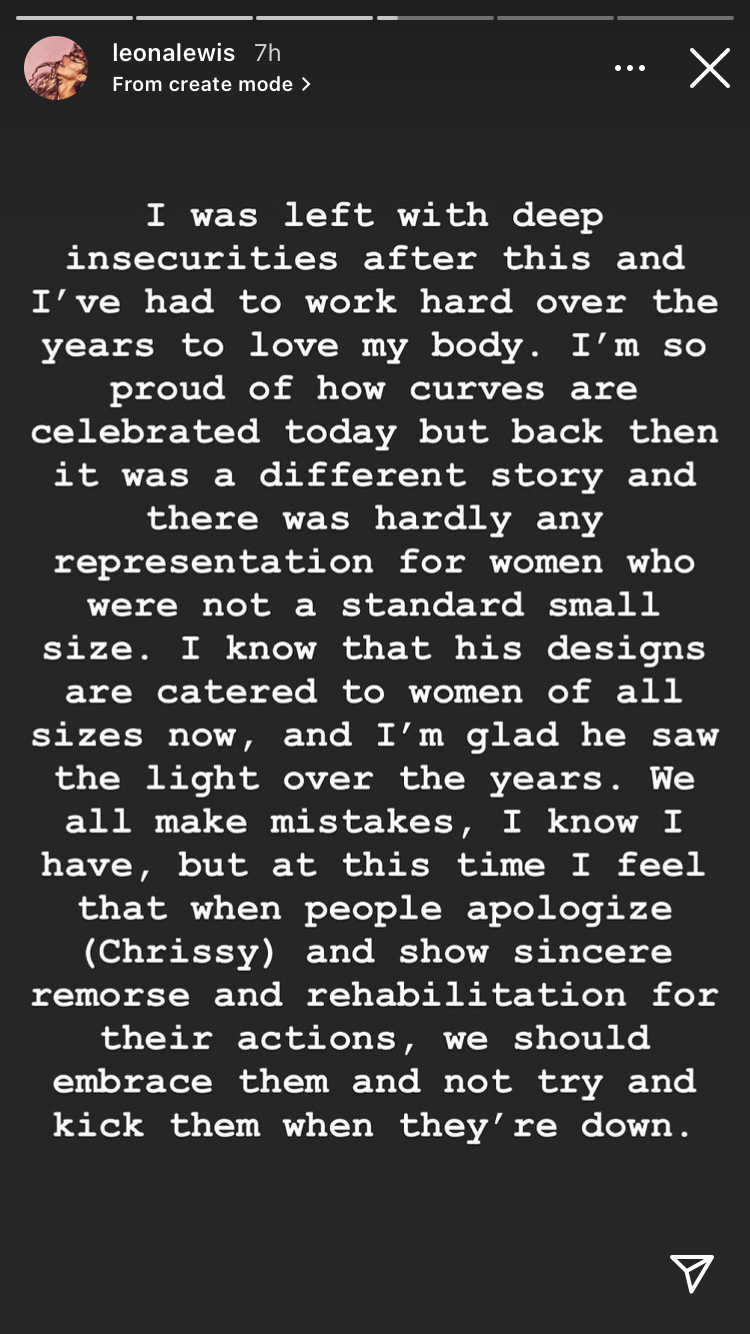 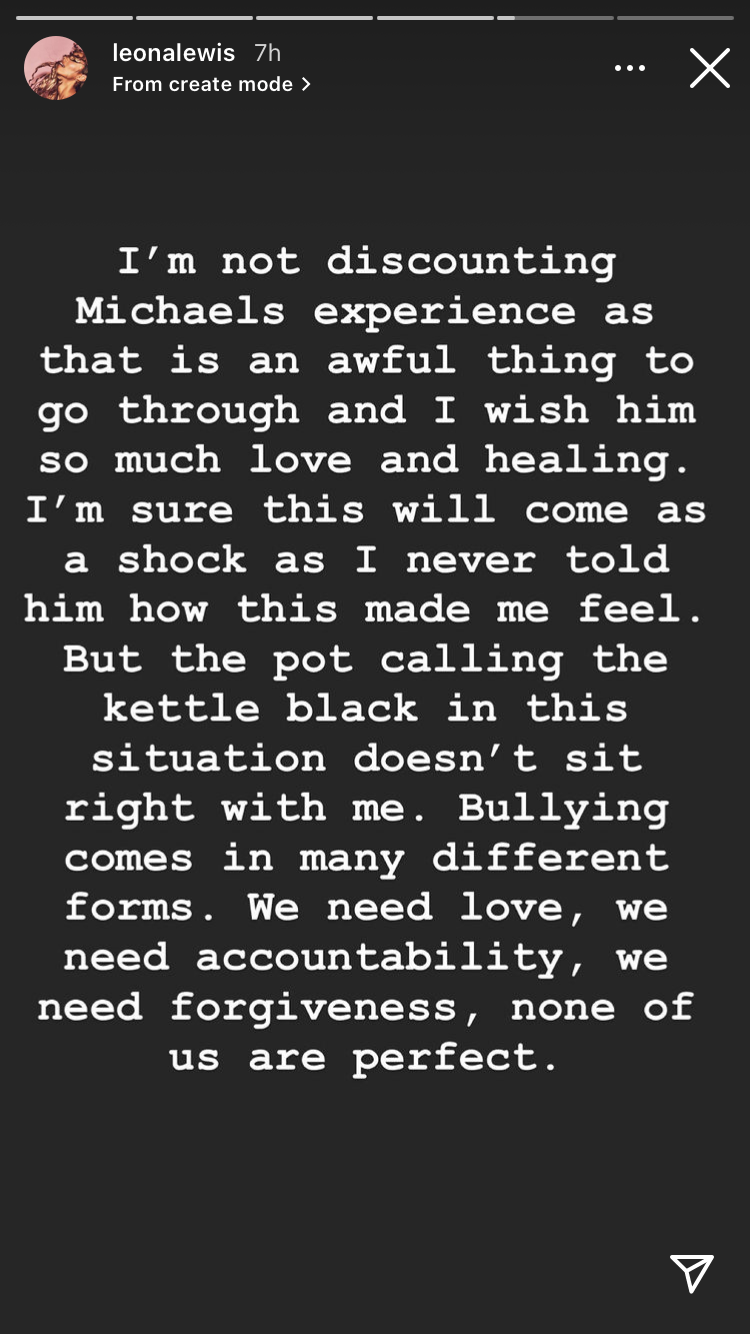 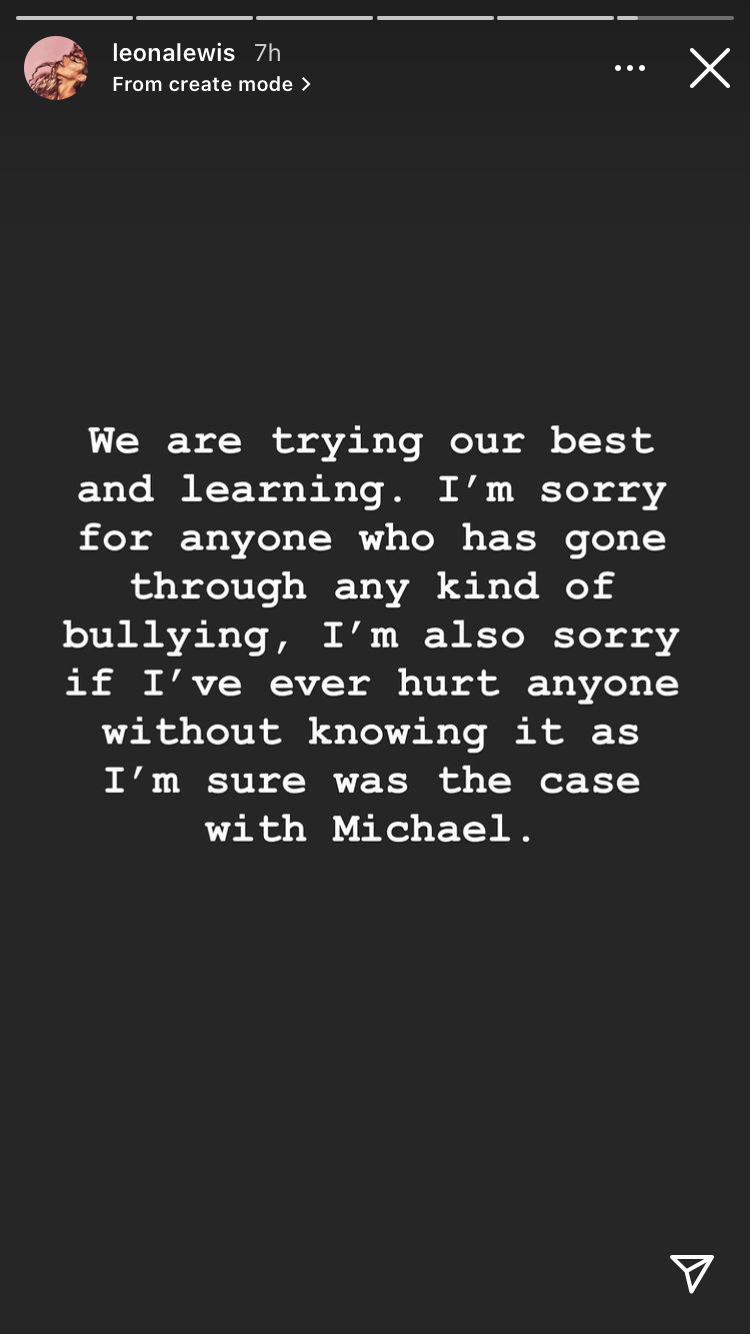