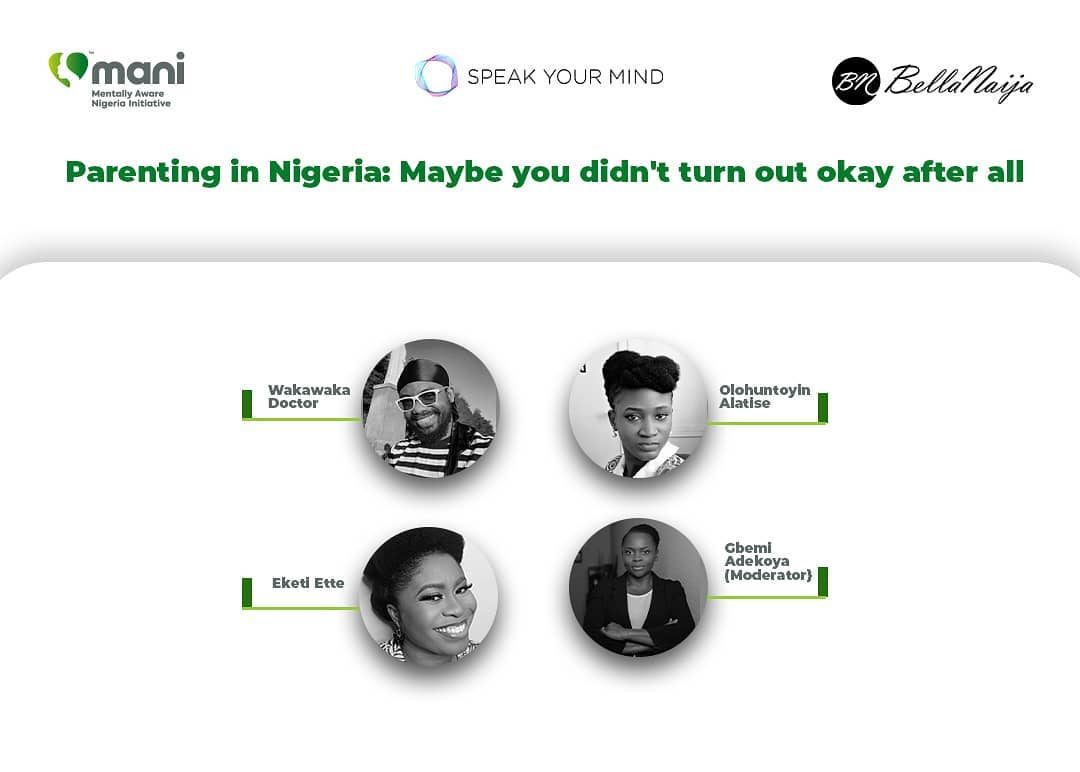 On Thursday, May 27, 2021, the Mentally Aware Nigeria Initiative (MANI) hosted a session on the Twitter Spaces platform Twitter as part of their planned activities for mental health awareness month. The focus of this event was on parenting in Nigeria and in attendance were Eketi Ette, Wakawaka Doctor, Olohuntoyin Alatise with Gbemi Adekoya moderating.

The idea behind this conversation was to delve into how communication and culture can impact parenting in an African context. The conversation highlighted parenting patterns that aren’t ideal and that we have accepted as normal for us, as Africans or Nigerians. All the panellists agreed that the way we raise children is how they act in society.

Eketi said “I realised that my friends who got more dialogue, more naughty corners, and had their favourite toys taken from them as opposed to being canned, seemed to approach situations differently. They were more confident if I could put it that way. They would always want to find out why something was a certain way. They didn’t just take your word for it. If you told them this thing was bad, they would ask you, why is it bad? And you’d have to explain, as opposed to where I was coming from. If you were told something was bad you ask why it is bad, you’d be told to stand there and ‘ask me rubbish questions’. And you would go away, in your head, you’ve already been told it is bad. So you’ve said it is bad, but you don’t understand why it’s bad. And I could see the difference in communication.”

Gbemi continued; “We parent the way we were parented, however, certain factors can interrupt that automatic cycle and so something else can happen that can make us think about things differently, which I think is a very valid point because if you think about how Nigerian culture typically is, we’re very big on authority and we do as we are told. So if you ask me, a good Nigerian child is a compliant child. Is this a fair generalisation? So when you talk about being a good girl being a good boy, that’s what it means. It means compliance. And so what would then happen is that children grow up believing that they’re good when they do as they are told, and they’re bad when they don’t. So it’s very likely that as you become a parent and raise your own children, you then tend to then think that when your children do not do as they are told, then that means that they’re bad because they are non-compliant. So if you now get exposed to a different point of view that suggests that children are allowed to have an opinion that is different from their parents’ own, it can be a cultural shock the first time you’re exposed to it.”

Gbemi further pointed out, “Nobody knows what they’re doing. In fact, I usually say if you ever meet the parents who absolutely know what they’re doing, they’re very dangerous and I’m worried about their kids. Because part of the ‘not knowing’ is kind of what humbles you and lets you research for information and look for help. And even as a parent with children with different temperaments, I can tell you that I use different styles with each of my different kids based on the situation.”

Wakawaka Doctor said; “The parenting style that we use mostly in Nigeria is the authoritarian one, very strict, disciplined. In permissive parenting, communication is more open so that there is space for dialogue. The parents allow the children to decide for themselves rather than giving directions. The onward style is the worst of them all. Here, you don’t care. Whatever they turn out to be is their business. So, I could see your own style and say, ‘Mehn, that’s not the way I want to raise my kids. You’re wrong.’ You could see my own style and say ‘what are you doing?’”.