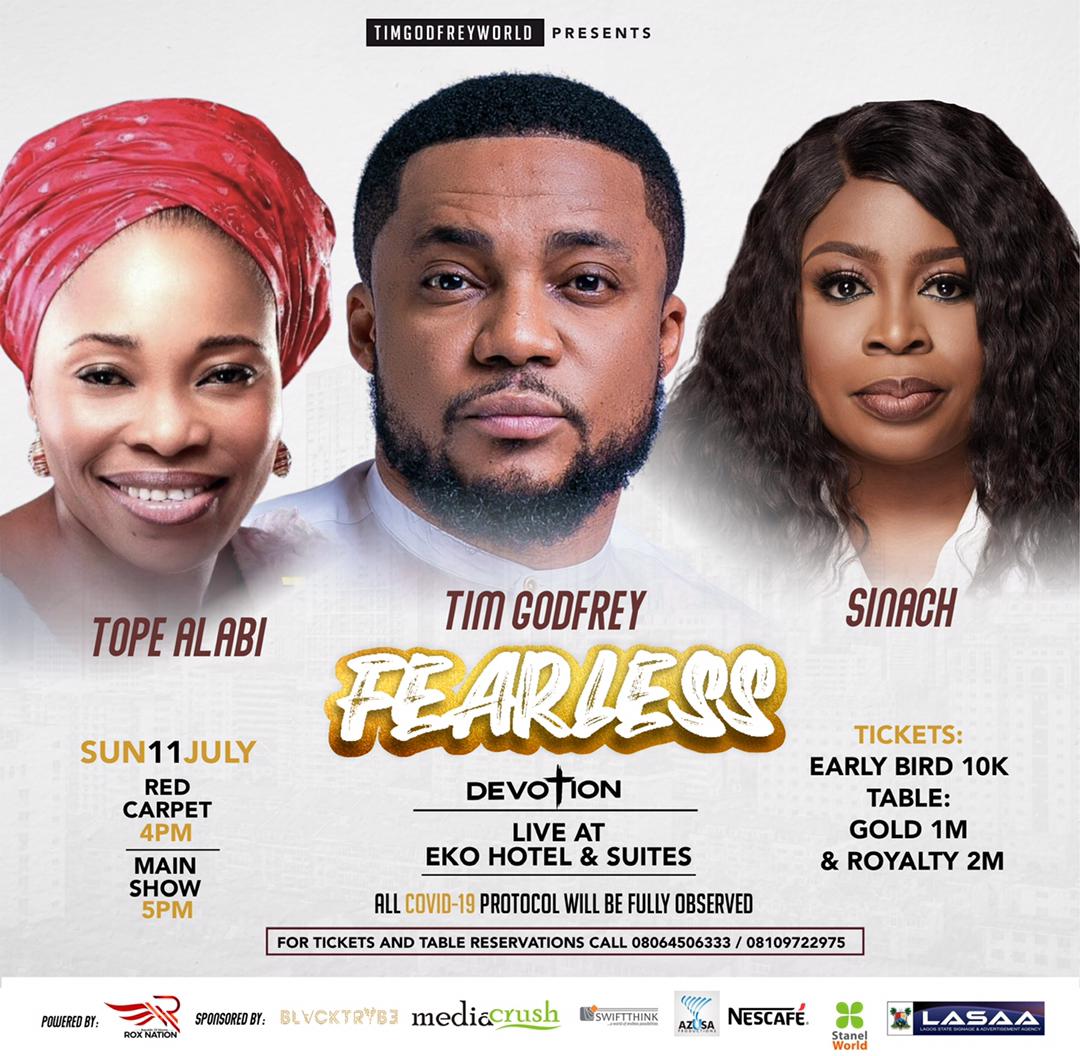 FEARLESS was attended by approximately 6000 individuals in 2016. Tim Godfrey and Marvin Sapp, a five-time Grammy nominee and two-time BET award winners, both delivered exciting performances during the occasion.

Kirk Franklin, a 12-time Grammy and 17-time stellar award winner, took leadership of the spectacular performances in 2017, which drew over 30,000 people.

Fearless was held in five different states in Nigeria in 2018: Akwa Ibom, Rivers, Lagos, Abia, and Abuja. Tim Godfrey and Travis Greene headlined the tour, which also included exciting performances by other A-list celebrities. Travis Greene recorded his praise song “Nara” with Tim Godfrey there. It was a great success, as it attracted well over 100,000 people in total.

Israel Houghton, a five-time Grammy award winner, JJ Hairston, a multiple-time brilliant award winner, and renowned worshipper, singer, and songwriter Phil Thompson performed at the concert in 2019. The performance, which took place at the Eko Hotel and Suite, drew over 50000 attendees and over 1 million online viewers.

Due to the global pandemic, the 2020 edition took the shape of a virtual performance, which was shown over local and satellite TV stations in Africa, America, and Europe, as well as streamed across multiple online platforms such as YouTube, Facebook, and Instagram. The “Virtual Concert,” which had over 500000 views in less than 24 hours, featured international recording gospel singers such as Maranda Curtis, Phil Thompson, Sonnie Badu, Dr Tumi, JJ Hairston, and others.

Fearless Concert will return for its sixth edition on July 11, 2021, with the theme “Devotion” at Eko Hotel and Suites. This year’s edition will include both a physical and online audience; the goal is to have over 50 million people worship from all over the world across all platforms (online and onsite).

Speaking at this year’s concert, Tim Godfrey; “This past season has been a roller coaster. A lot has happened and there’s no better time to devote ourselves; even the Nation to God hence I’m elated to announce Fearless Devotion 2021. This phase is so special to me because personally it’s been a battle and the only safe place to be is with God. My Team and I have worked so hard, prepared, prayed to bring this dream to reality.

“I genuinely have no words to describe what we’ll experience at FEARLESS DEVOTION but I assure you it will be nothing short of Life Transforming, mind-Blowing, Supersonic, beyond all these, our lives will never remain the same.”

Fearless is a musical concert that focuses on inspiring our generation, encouraging them to rise above their fears, to break the growth limiting barriers inherent in our society, to become who they are truly created and designed to be.

The fearless project which is powered by the multiple award-winning singer and songwriter, Tim Godfrey is an annual Mega Concert/Live recording of soul-lifting and extremely entertaining music performance with infusions of Broadway-themed performances, electrifying dance routines and stage choreography.

Tickets are available and almost sold out. For reservations go to www.timgodfreyworld.com