Not so long ago, 40-year-old David Ngwerume was running his law firm ‘Ngwerume Attorney and Law’ and defending clients fearlessly in the courts of Harare. But then COVID-19 struck. Now he uses his free time and a childhood hobby to chisel away in the fight against COVID. 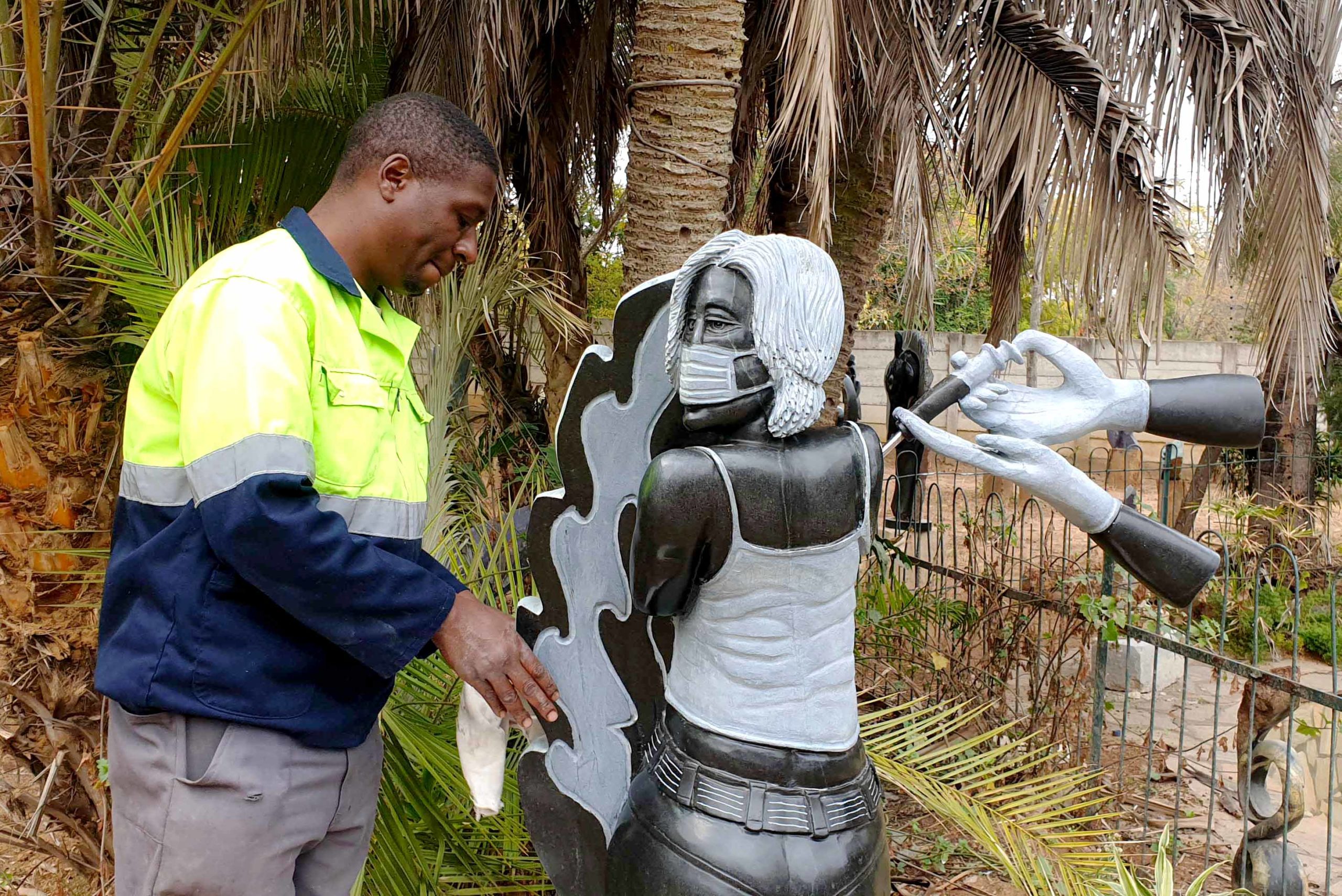 In what feels like a different universe – those days before the arrival of COVID-19 – David Ngwerume would be found on most weekdays neatly clad in a dark suit, white shirt and tie, working long hours at his law firm. The restrictions on movement due to lockdowns meant that the barrister suddenly found himself with time on his hands. Instead of letting that worry him, however, he took time out to start doing something he has always loved – sculpture.

Now, one of Ngwerume’s pieces has gained local notoriety and has allowed him to contribute to the fight against the deadly virus. His sculpture, “Arms” is a signature piece depicting a seated person receiving a vaccination. “’Arms’ urges individuals to take the vaccine to protect themselves,” he explained from his home in Harare.

Just like millions around the world and despite practising social distancing, masking and hand hygiene, Ngwerume found himself at the receiving end of COVID-19’s impact – with the accompanying losses and grieving. “I have lost relatives, close friends even law colleagues,” he said. 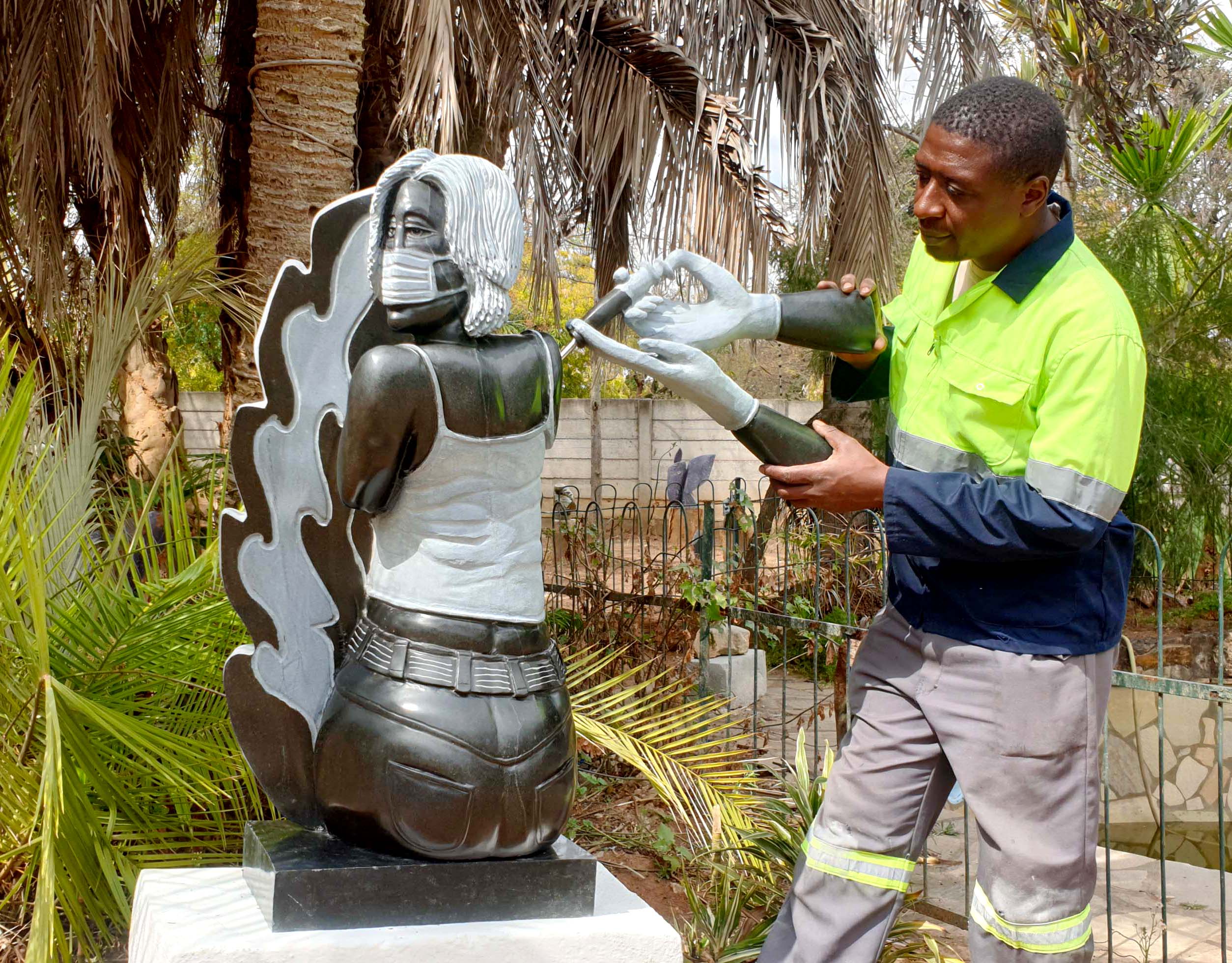 Ngwerume decided to fight back. At the beginning of 2021, the government of Zimbabwe launched its mass vaccination campaign, aimed at immunising two-thirds of the country’s 15 million people by the end of the year. The exercise was met with misinformation within society.

Ngwerume, who by this time had become well practised in the art of wood and stone sculpture, saw this as an opportunity to help cement the government’s life-saving messages in peoples’ minds – by putting his rekindled passion to work.

“My inspiration around the COVID-19 artefacts is that the pandemic is a scourge that has befallen the whole world. I saw myself mandated to relay messages of awareness, using art,” he explained. 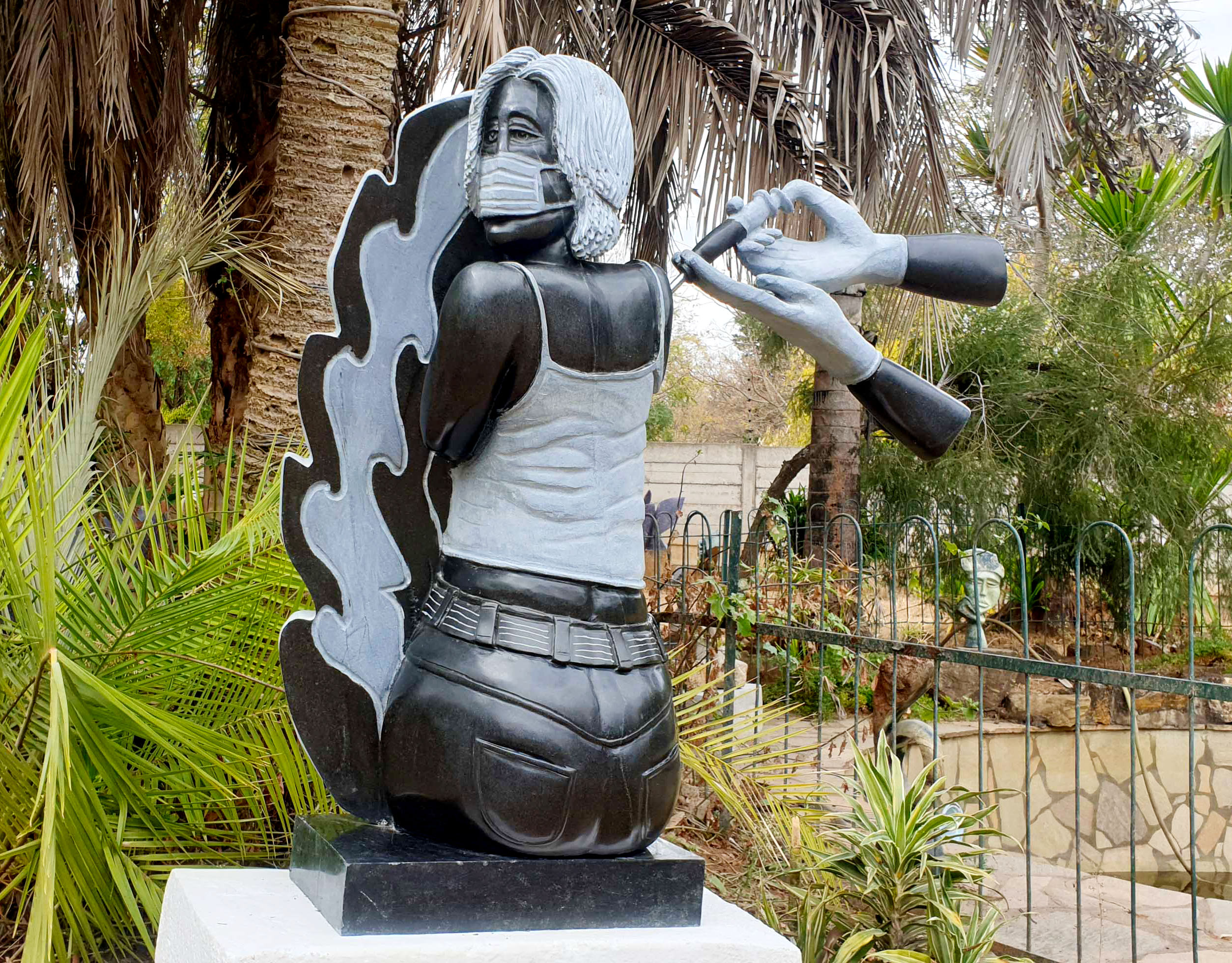 Since the beginning of this year, he has created eight intriguing rock sculptures which he is using to disseminate the COVID-19 messages to society, through open space exhibitions and on social media. Another sculpture he has named ‘MJ’ after the late king of pop, Michael Jackson, who famously wore a face mask on his trip to Africa. It depicts a person wearing a face mask to protect themselves from the virus.

Ngwerume said that he often places the sculptures and information on vaccination campaigns on social media, where the public can freely enjoy his work and take the messages seriously. 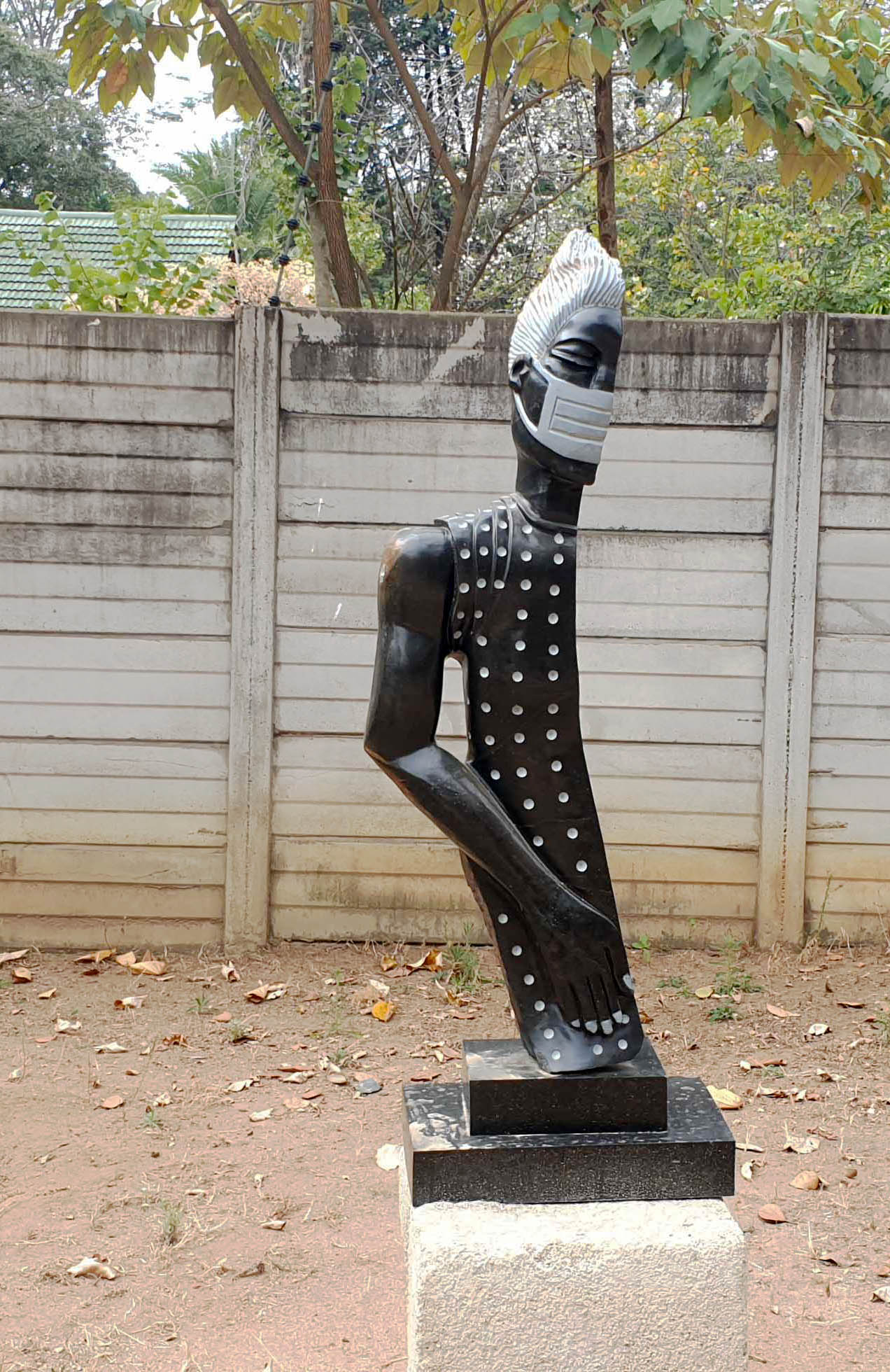 “The exhibition… is titled the ‘COVID-19 pandemic’ and this exhibition’s focus is much on awareness messages that are enlightening people on how the disease is dangerous, precautionary measures that people must be taking so that they would prevent the spread of the disease and also encouraging vaccinations,” he said.

Another sculpture called “We are Torn,” urges individuals to cough into their elbows. It depicts a person with half of their face buried in their arm.

Recently, Ngwerume finished working on a sculpture out of stone called “Fearless Conqueror”– an eagle looking upward in the sky. He said the piece carries a message of hope during the pandemic and is intended to uplift those who have lost faith. He said he hopes his pieces can make a difference in the fight against COVID, around the world. 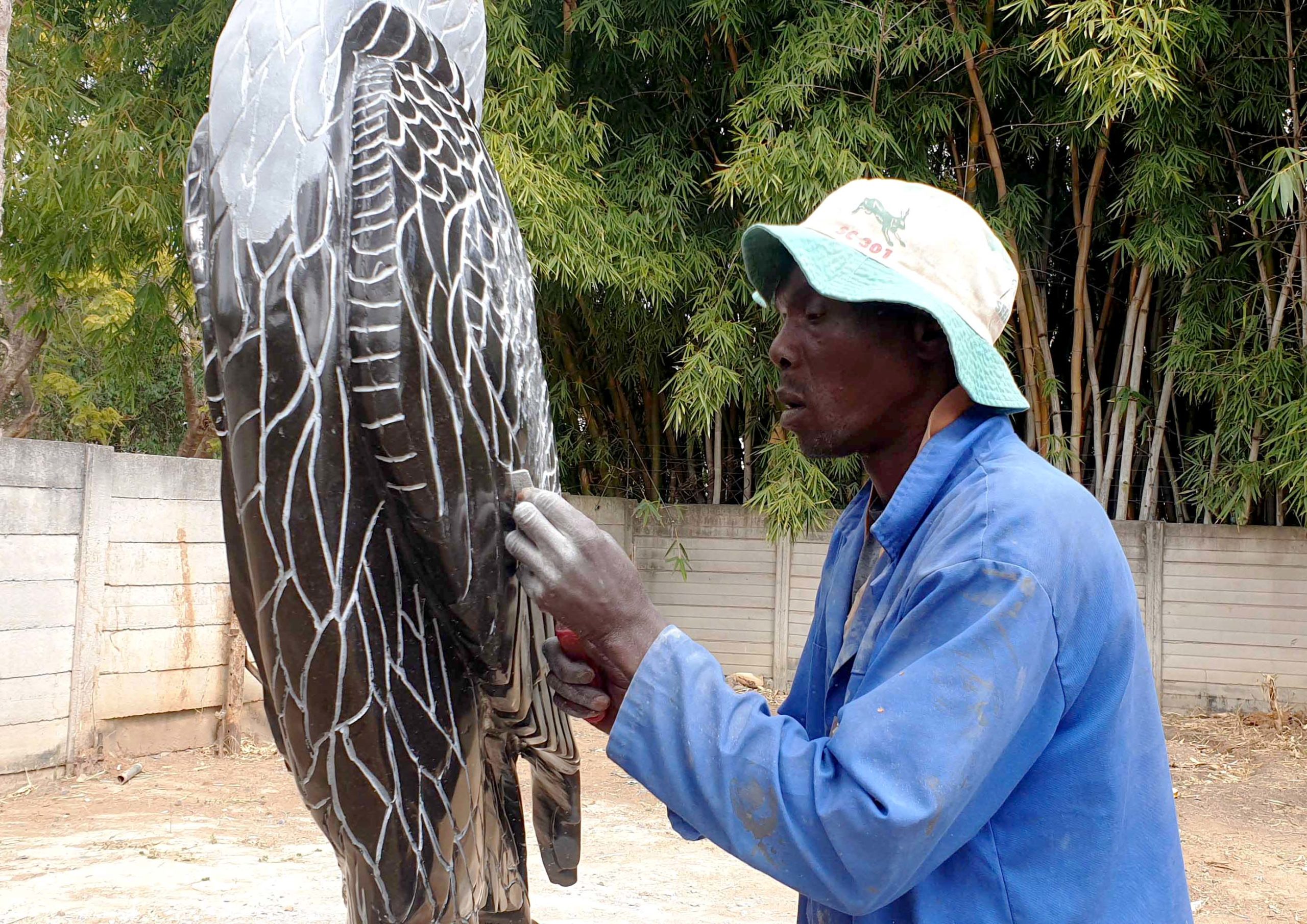 Since February, it is estimated that 1,400,000 Zimbabweans have had their first shot of vaccine and another 680,000 have had a second dose.

As of July, Zimbabwe had had close to 100,000 confirmed coronavirus infections and over 3,000 deaths, according to Johns Hopkins University, which is tracking the global outbreak.

But perhaps Ngwerume’s most memorable piece is the one he has named the “New Normal”. He painstakingly chiselled it out of granite and it is in the shape of the African continent wearing a face mask. This, he said, was his message to the people of Africa – “mask up”. 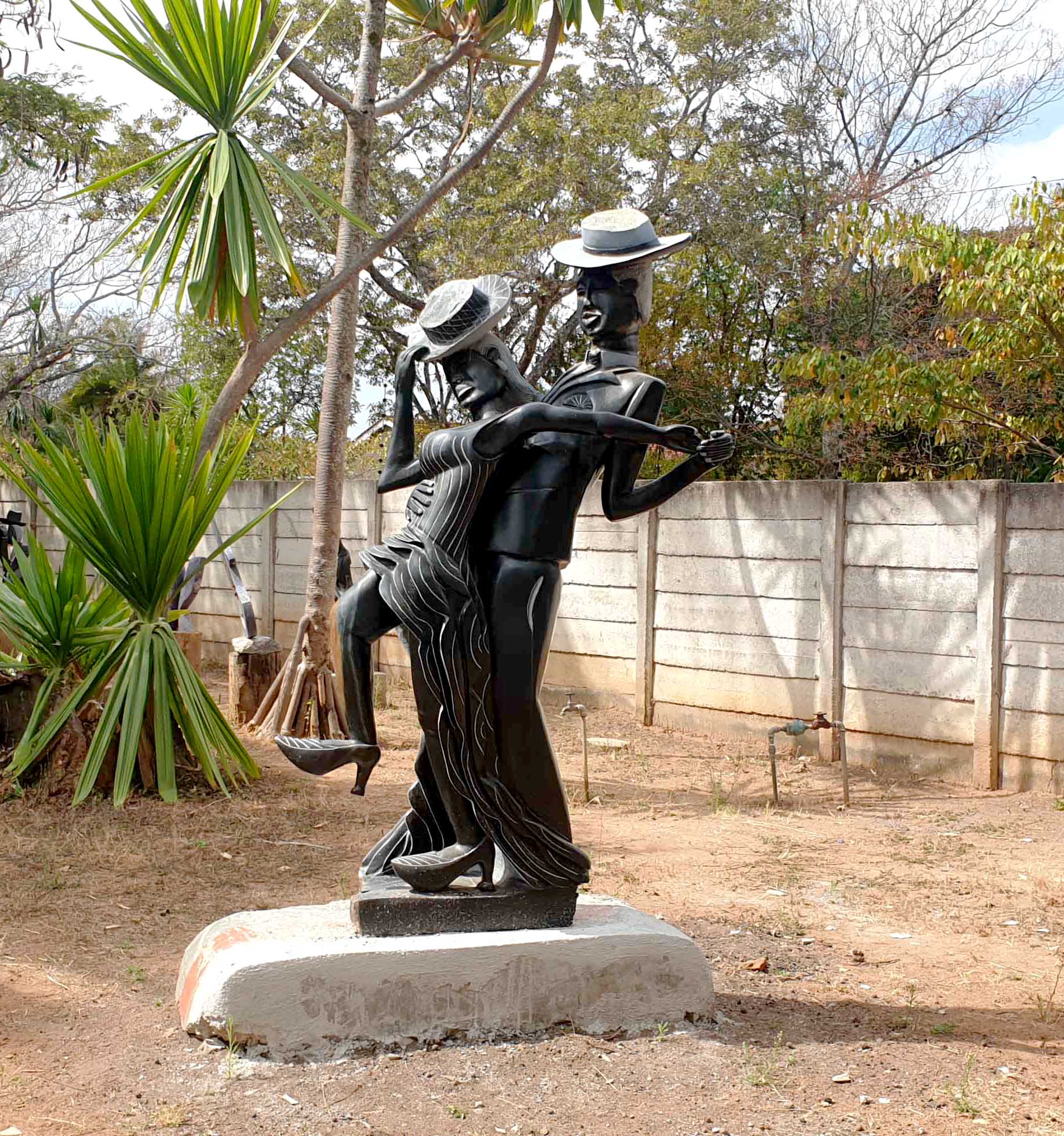 If enough people take Ngwerume’s messages literally, it may just be a matter of time before he is faced with the option of returning to his “day job” as a barrister in the city.