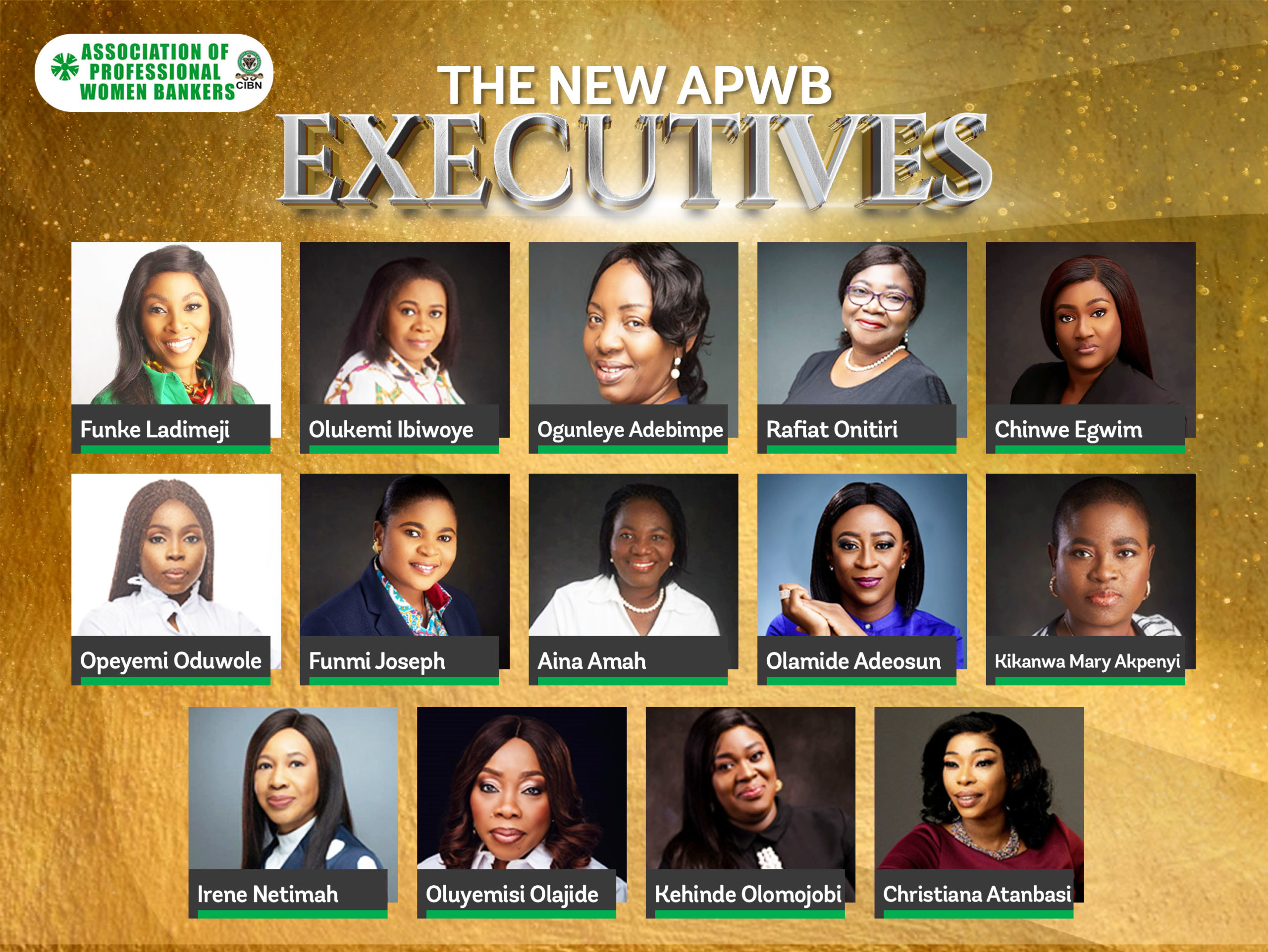 The Association of Professional Women Bankers, the female wing of the prestigious Chartered Institute of Bankers of Nigeria (CIBN) is excited to officially announce the appointment of its new EXCO members. This appointment was done on September 25th, 2021.

Since its inception in 1983, APWB has been at the forefront of equipping and empowering female bankers with relevant tools that support career advancement and impact, contributing to the growth of the banking industry and corporate Nigeria, as well as celebrating female bankers.

Members of this Association access numerous benefits, including – capacity-building initiatives, opportunities for valuable partnerships and collaborations, opportunities to network with bankers and other professionals, as well as opportunities to gain valuable leadership skills from selected mentors, amongst others.

During this virtual event, 14 leading female bankers were selected from across different banks in Nigeria, they are: 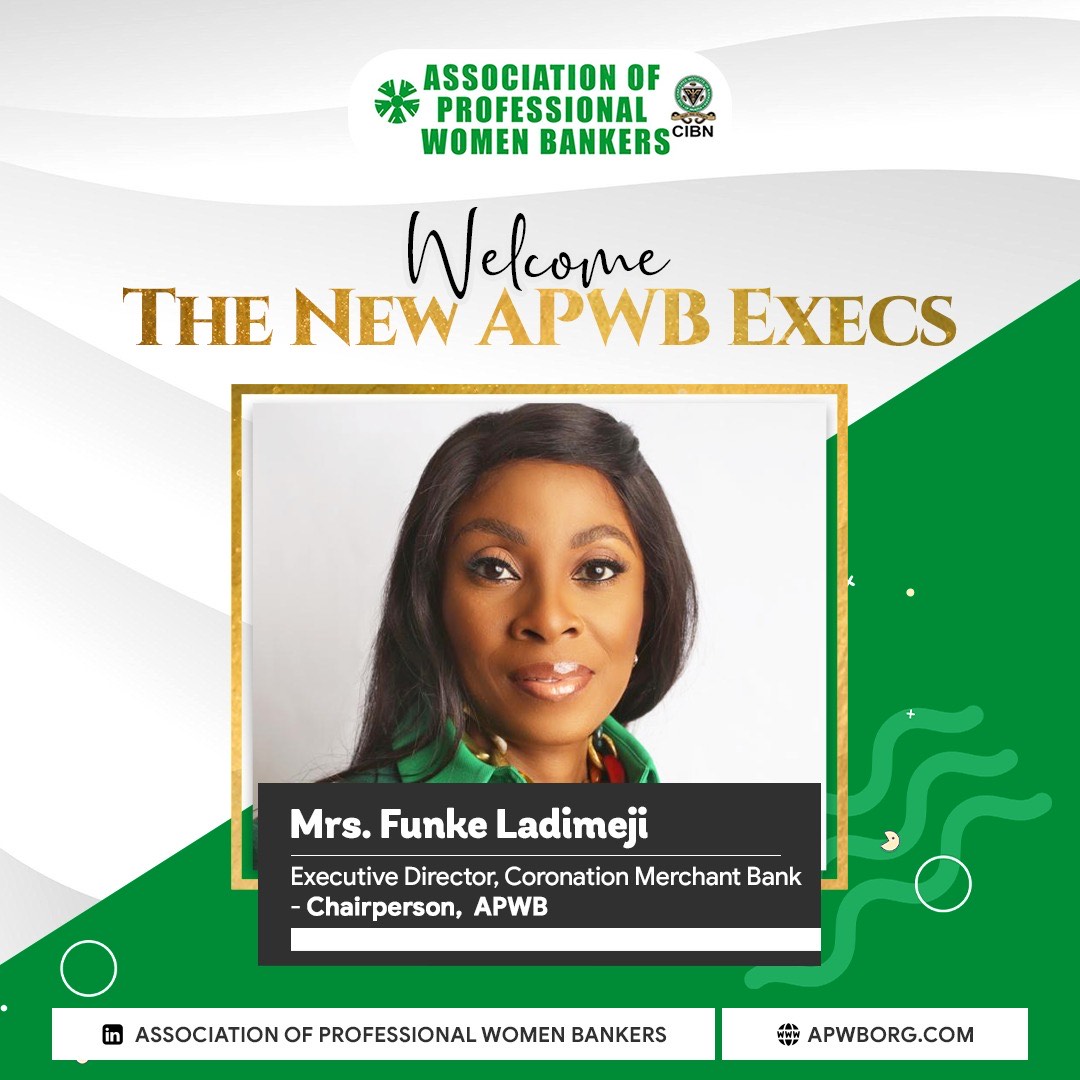 Funke Ladimeji is an Executive Director at Coronation Merchant Bank. She is a uniquely skilled and experienced Investment Banking Executive, with a global career spanning Banking businesses, across Markets and Corporate Finance, across multiple jurisdictions in EMEA (Europe, Middle East, and Africa), North America, and Asia, across multiple asset classes (including debt, equity and the range of assets between debt and equity, as well as derivatives) and across multiple functional areas, including Financial Control, Complex Product Accounting, Technology, Business Operations, and Human Capital.

She has an unparalleled track record in driving wallet share and revenue growth, as well as restructuring and leading businesses to new levels of success.

Funke has organically and inorganically led businessess through integrations, rationalizations, overseeing investment in people and systems, driving collaborations and coherence across businesses and functions, while leveraging technology to build clarity, efficiency and seamless service, as a competitive business differentiator.

Funke is the Chairman of the Association of Women Bankers of Nigeria, a member of WIMBIZ mentoring programme, a member of Amazon professionals, a network of cross-sector professional women in Nigeria. She is a Fellow of the Institute of Chartered Accountants of England & Wales and holds a Masters degree in Globalisation and a Bachelor’s degree in Economics from Queen Mary and Brunel Universities respectively. 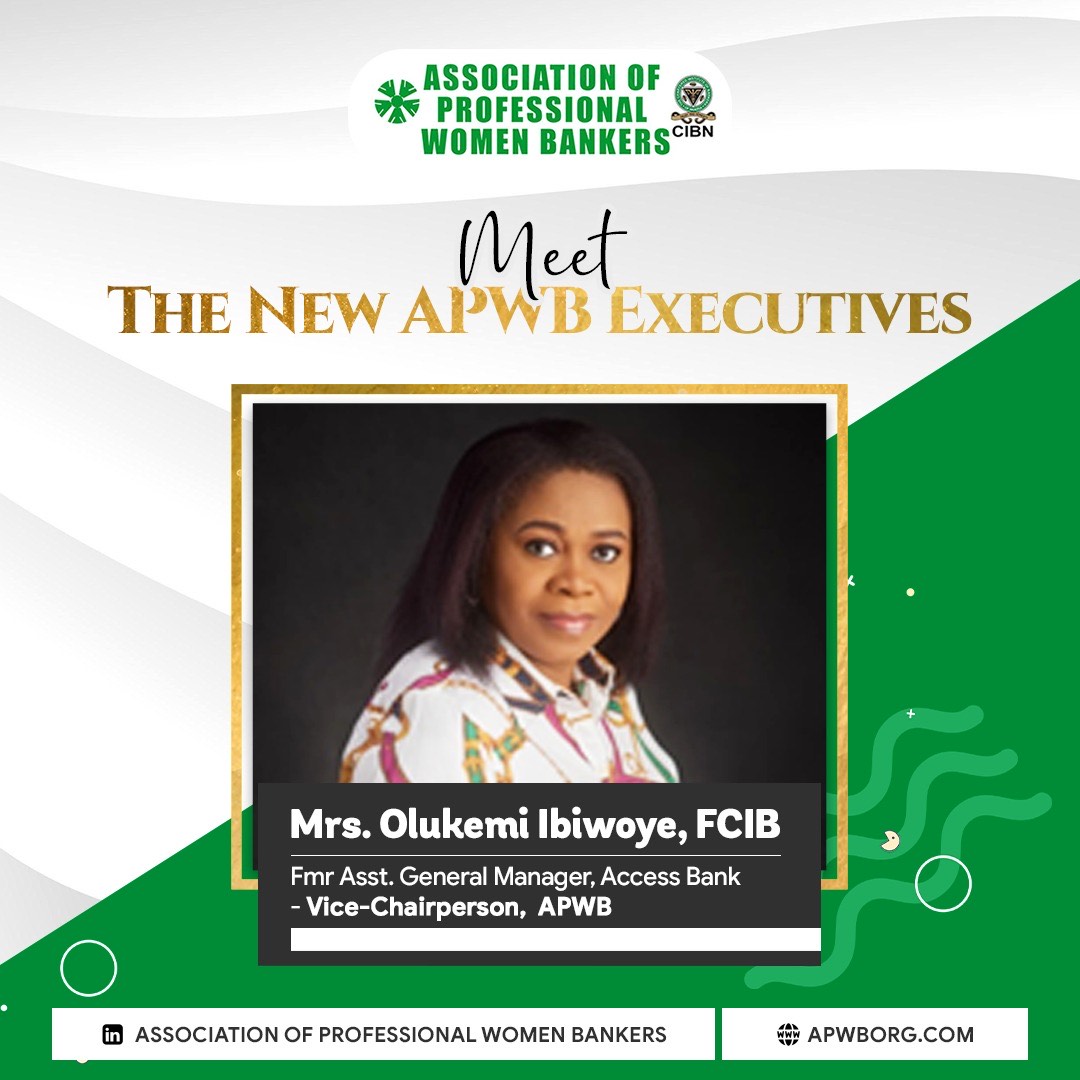 She is a Fellow of the Chartered Institute of Bankers of Nigeria with over twenty years of working experience in the Banking Industry. She worked with Citizens Bank (now Enterprise Bank) and Ecobank Nigeria respectively in the Corporate and Commercial Banking Groups.

She headed Telecoms Group in Ecobank Bank Nigeria. In 2008, she joined Intercontinental Bank (Access Bank) and later became the Divisional Business Executive in charge of Telecommunication and Power. She resigned from Access Bank Nigeria in February 2012 as an Assistant General Manager. 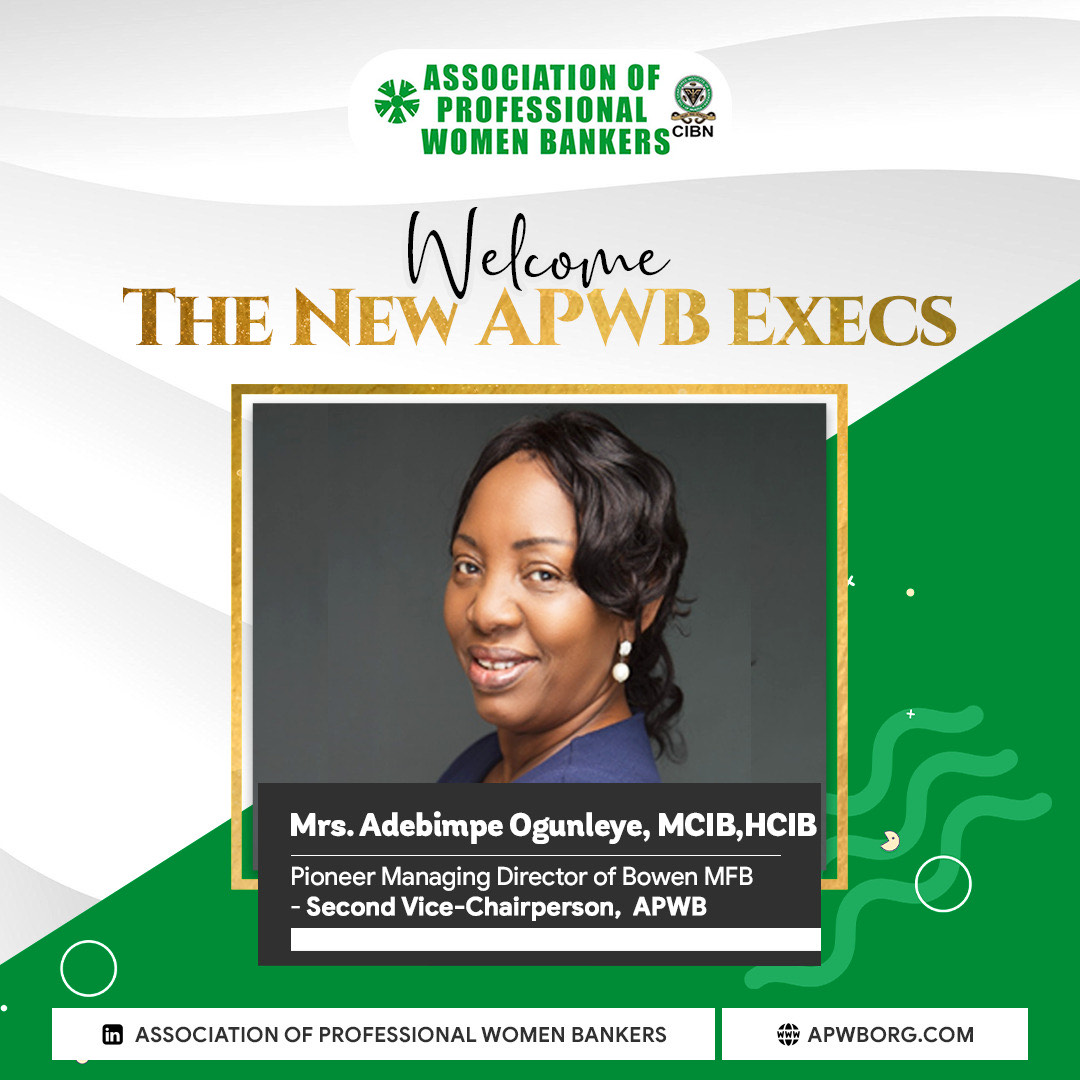 Ogunleye Adebimpe Esther has to her credit over 32 years of banking experience spanning over various aspects of financial services at community levels, rural and urban as well as regulatory organizations in Nigeria.

A pioneer Managing Director of Bowen Microfinance Bank, Lagos, Nigeria. As a microfinance expert, She is very passionate about the Financial Inclusion of the active poor particularly the development of micro-entrepreneurs in women and youths in communities. 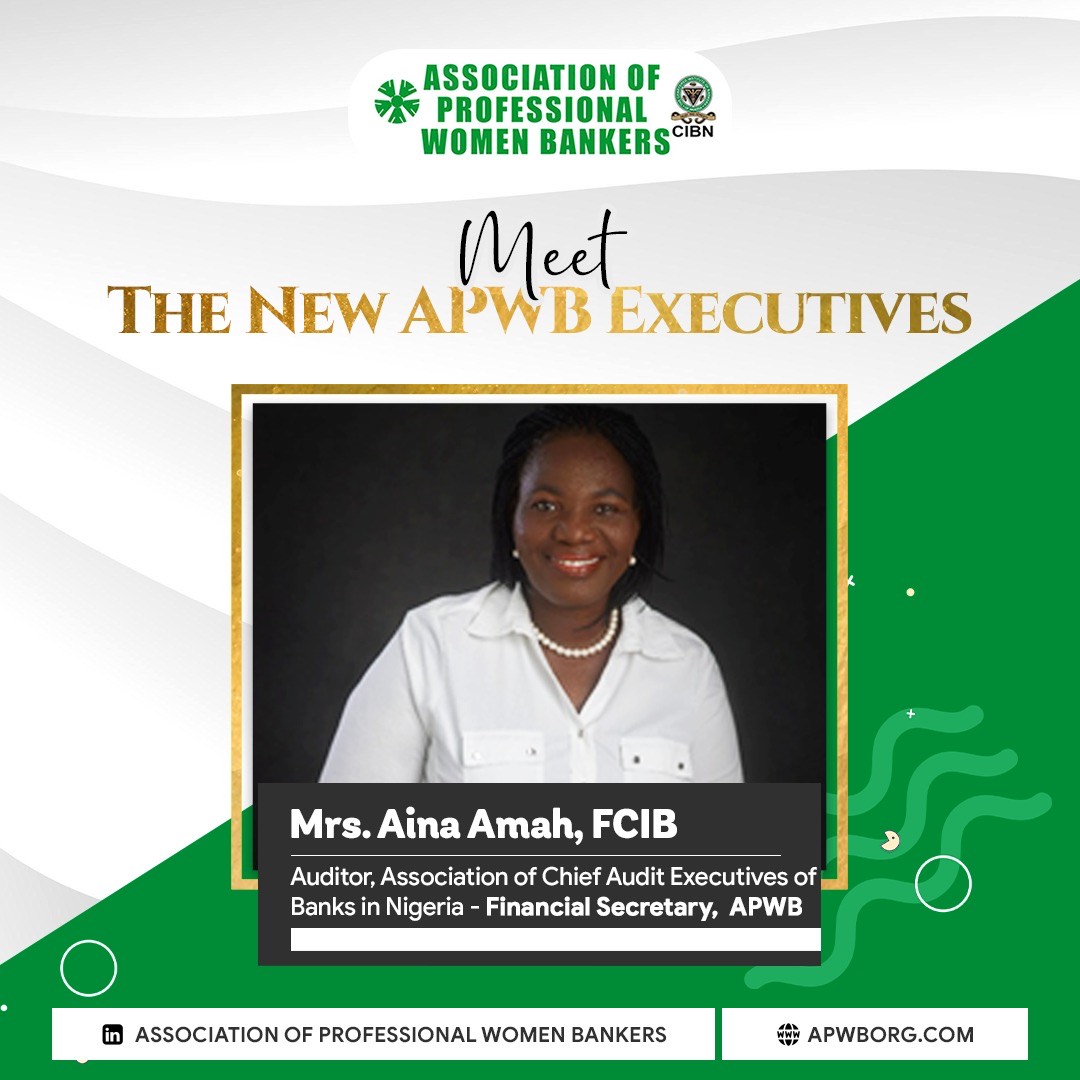 Aina Amah is a graduate of Economics from the University of Lagos. Holds an MBA from the University of Nicosia, Cyprus, Associate member, Chartered Institute of Management Accountants (UK), a Certified Global Management Accountant (AICPA), and a Fellow of the Chartered Institute of Bankers of Nigeria with over twenty years’ experience in the Financial Services sector of the Nigerian economy.  She started her banking career in 2003 with Resort Savings & Loans where she rose to the position of Head of Operations. 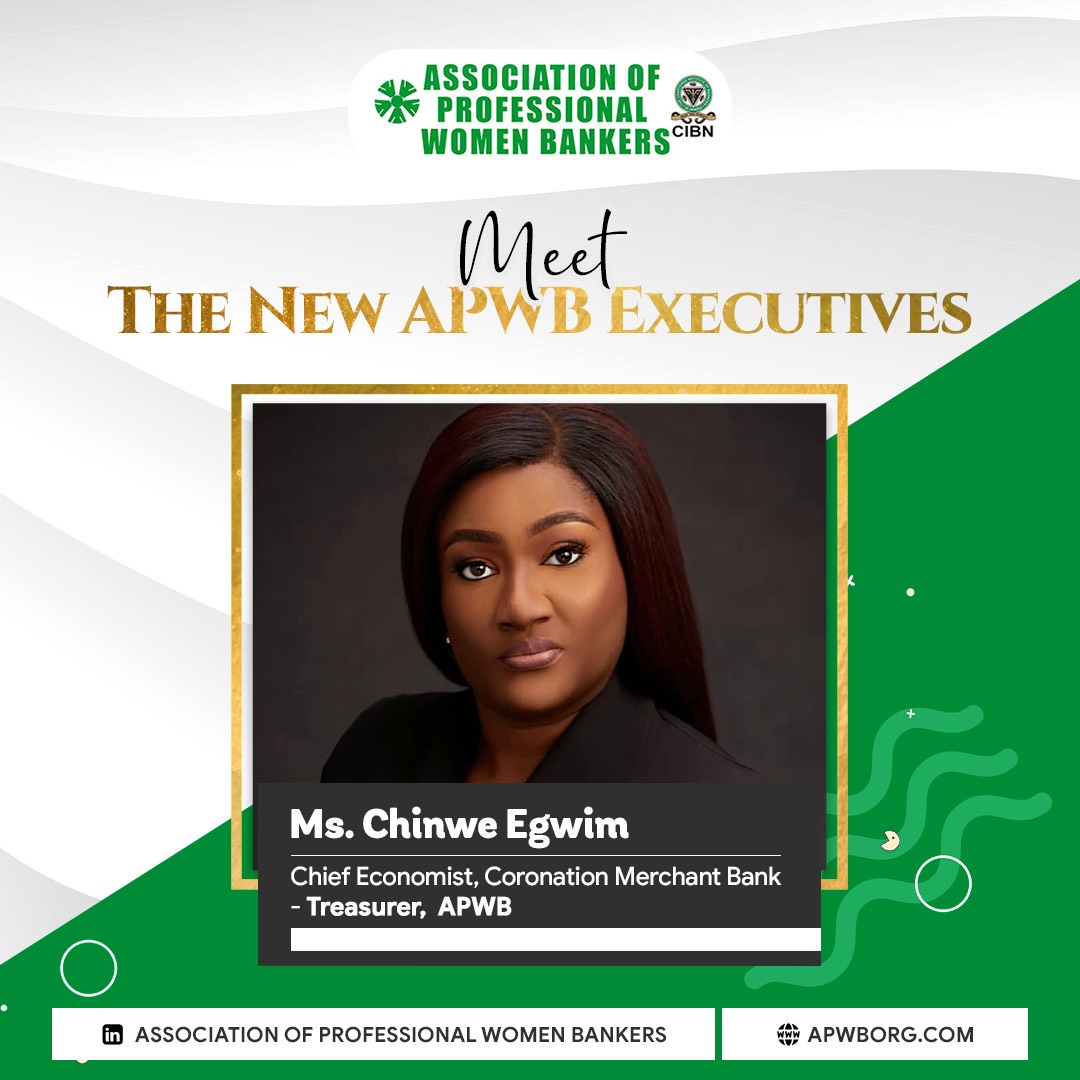 Chinwe Egwim is a professional economist with over 500 published economic notes under her belt. Prior to joining Coronation Merchant Bank as Chief Economist, she has had economic-inclined roles at FBNQuest Merchant Bank, FBN Capital, Fitch Ratings Milan, and the Central Bank of Nigeria. Chinwe was appointed as a National Consultant by the United Nations Economic Commission for Africa to lead the services trade project which is partly driven by the United Nations Conference on Trade and Development. Through this project, she successfully led the UNECA National Seminar on global and regional value chain analysis for the financial services sector as well as produced a policy document on the back of extensive data analysis, which serves as an auxiliary resource for the African Continental Free Trade Area agreement.

Chinwe authored a book titled, Understanding Economic “Jargon”. The book uses a simple approach to break down how economic indicators and the investment climate react to economic shocks and upswings. It has ranked as a bestseller on Amazon. Chinwe is an advocate for women’s empowerment.

She has received several reputable recognition and awards for her work as an Economist and Advocates for Women’s Empowerment. Some of which include: being recognised as one of the Most Influential People of African Descent (MIPAD) 100 under 40 in support of the United Nations International Decade for People of African Descent. She was awarded “Positive Role Model – West Africa” at the 2021 Accenture Gender Mainstreaming Awards. Nominated in X-factor Categroy, CIBN Awards 2021 which recognizes a leading female banker breaking the glass ceiling and inspiring a more gender inclusive industry. 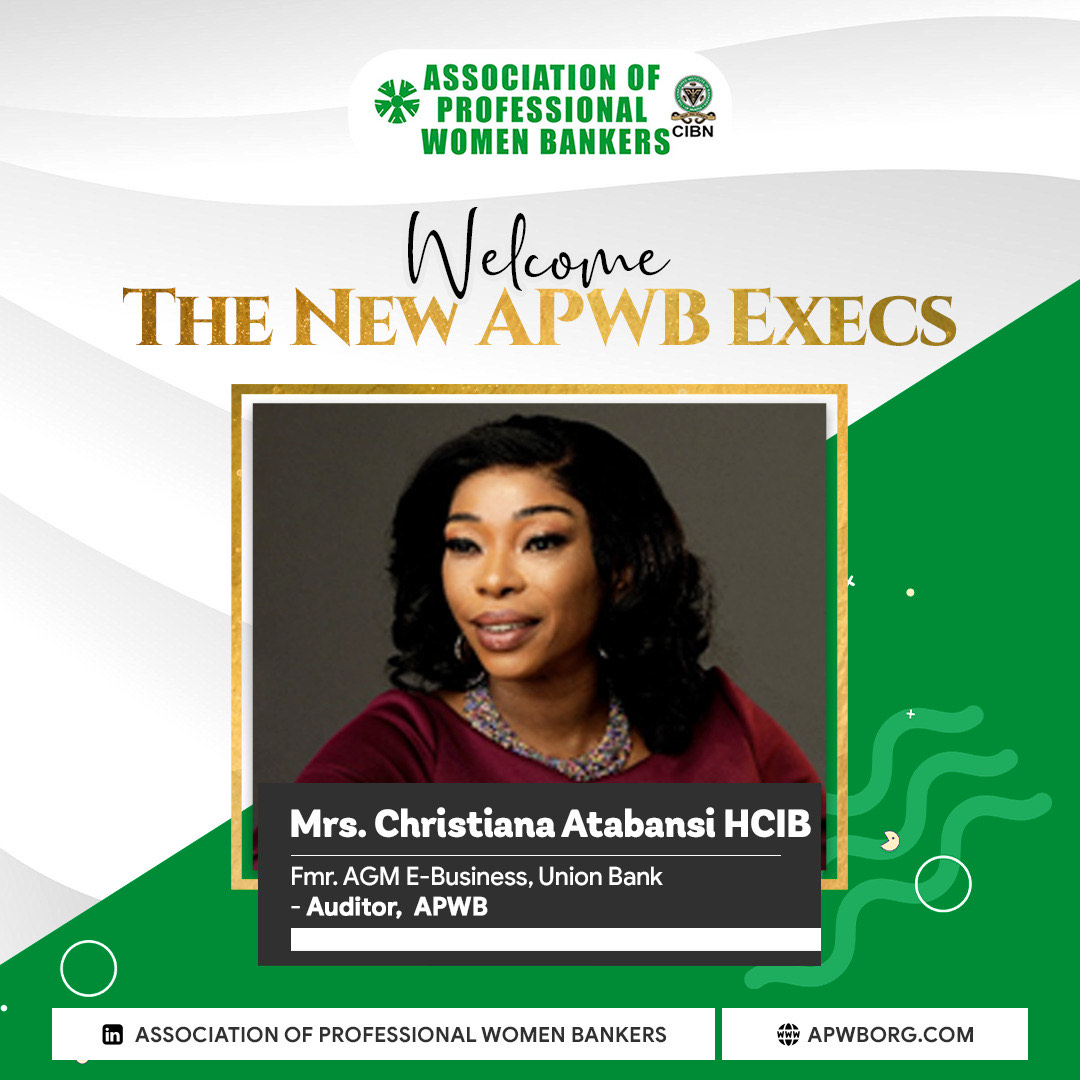 Christiana E. Atabansi is an experienced banker with expertise in Electronic Banking and Information Technology. She is currently working as a consultant with Gieliant as a Human Capital Management Consultant and serves as Executive Director of the Herbert Onye Orji foundation.

Previously, Christiana held the position of Assistant General Manager at Union Bank Nigeria (Card and ATM Unit), Group Head of Electronic banking at Intercontinental Bank (now Access Bank), and Regional Head of Electronic Banking at Ecobank among others. She also worked with Boys Scout of America as a Senior IT manager and with the World Bank as a Consultant, in the Europe and Central Asia Division. 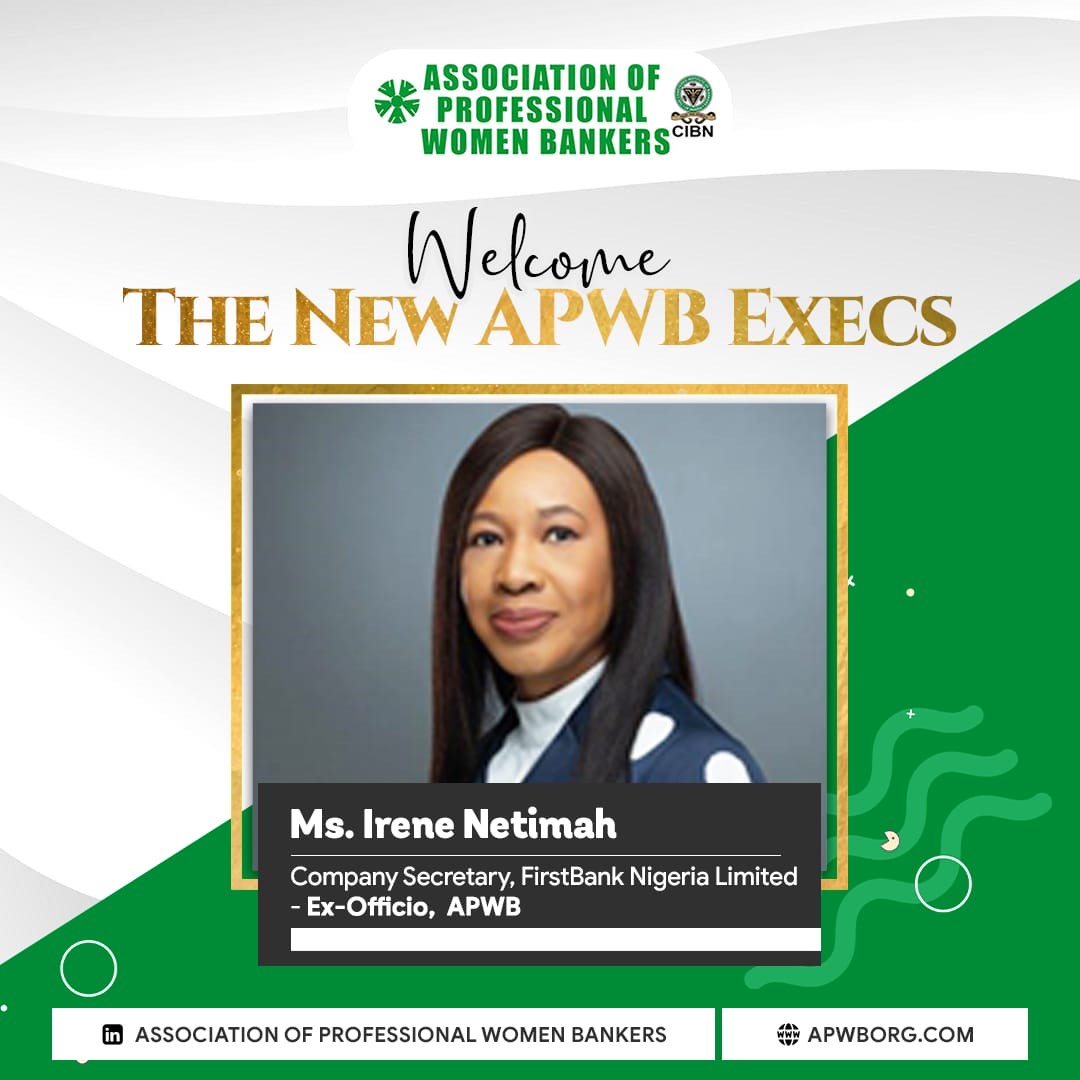 In that capacity, she served as a member of the Management Committee and as Secretary to the various Board Committees. Prior to joining FBN Capital in 2011, Irene served as the Corporate Counsel and Head, Corporate Services of First Funds Limited (now FBNQuest Funds) from September 2006 to October 2011. In this capacity she was responsible for drafting and reviewing the shareholder agreements governing the Company’s private equity investments, reviewing due diligence reports on potential investments. and liaising with outside counsel. 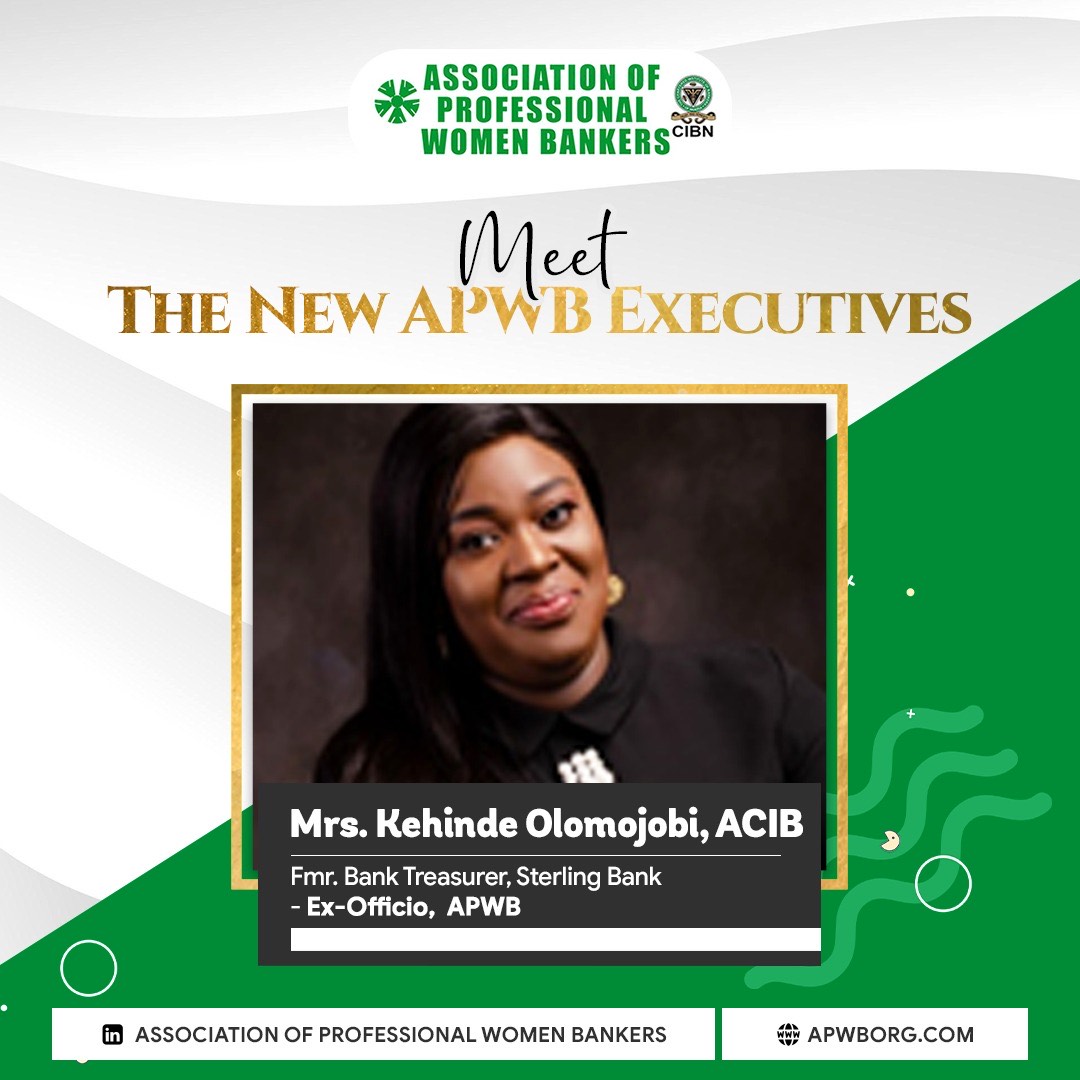 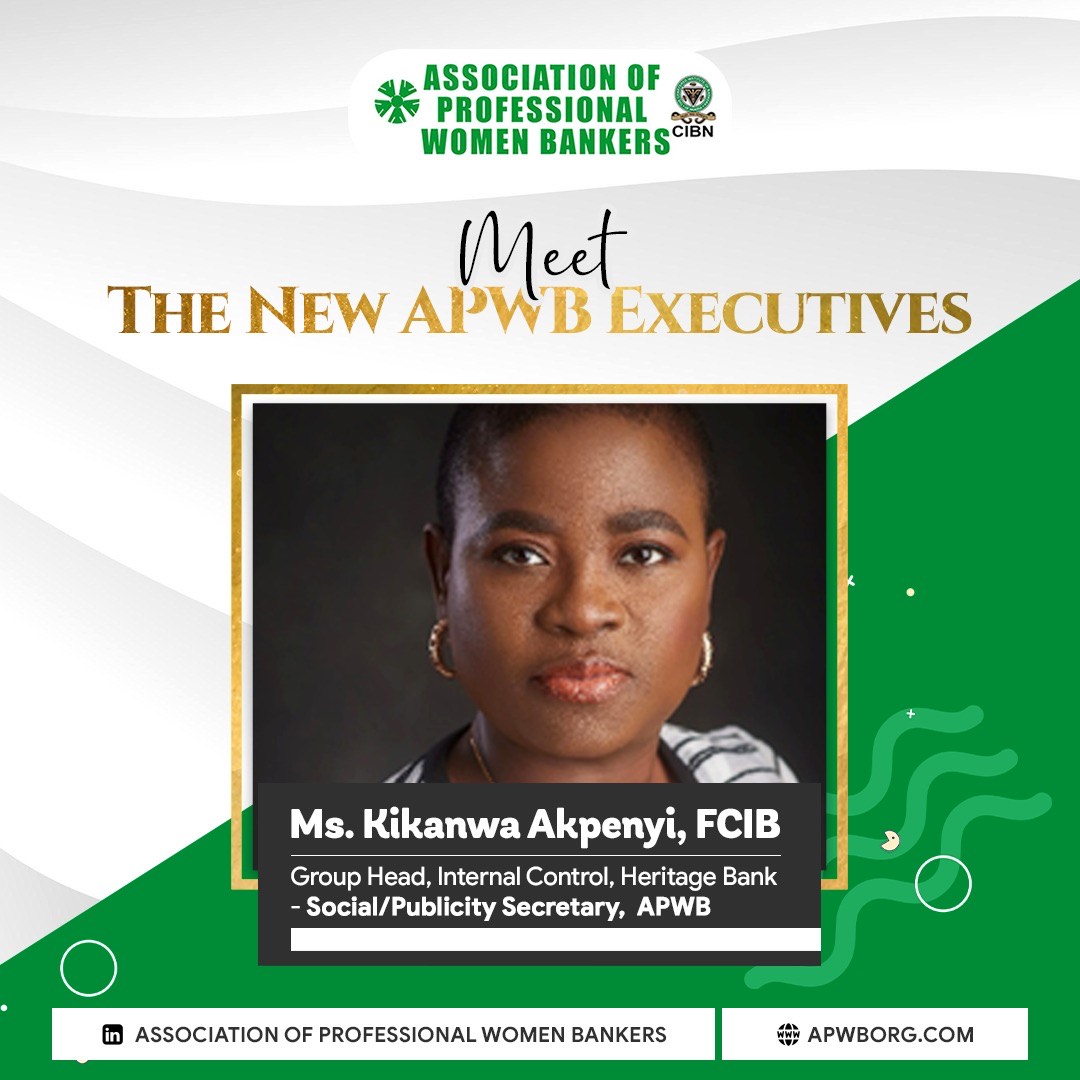 She has received local and international training in the area of cutting edge customer experience enabling her to transform customer interactions. She is currently the Group Head, Internal Control at Heritage Bank. where she is responsible for instituting controls to safeguard the financial assets of the organization towards meeting its overall objectives. 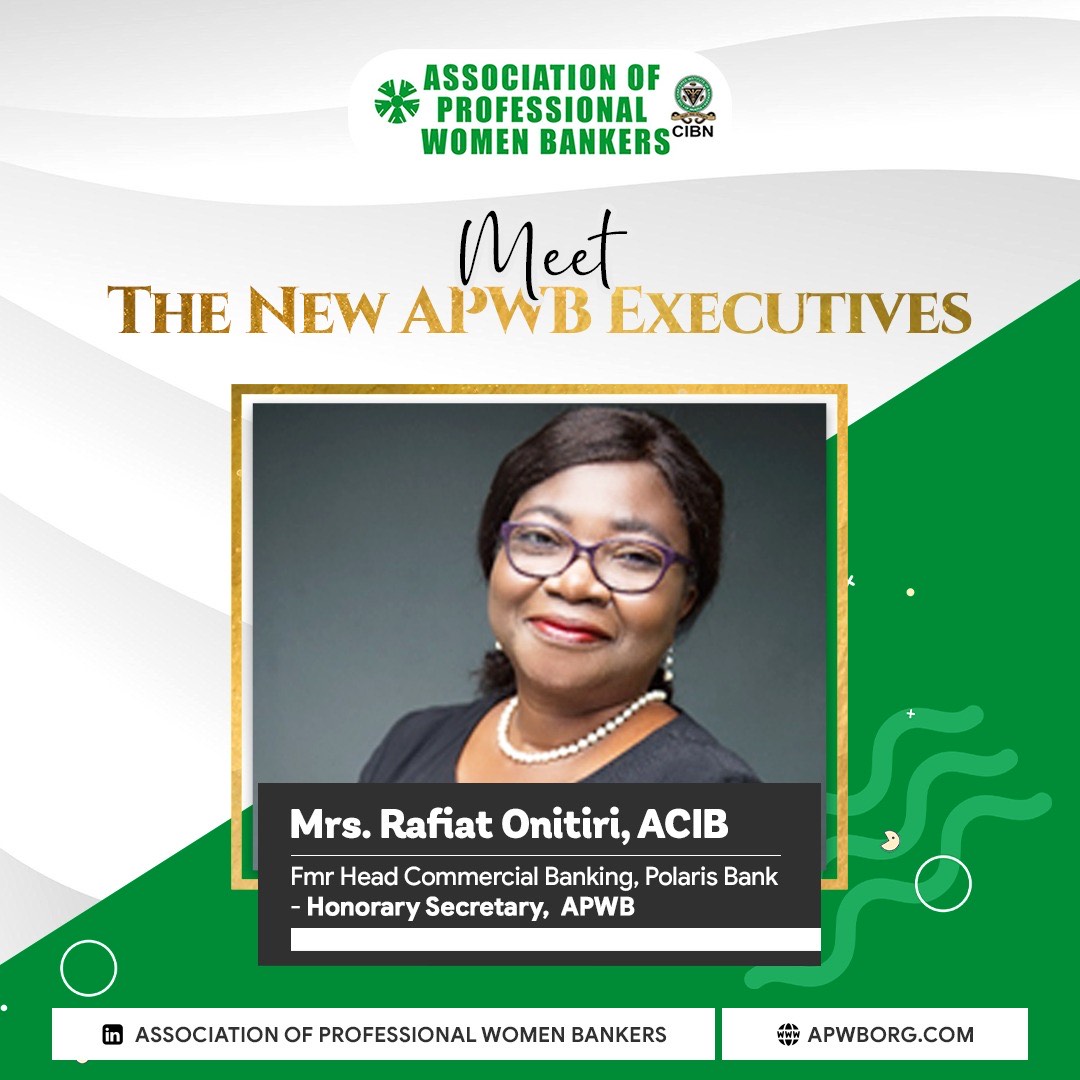 Rafiat Onitiri having spent over two decades in the banking industry occupying various positions including managing a major branch of her employers, founded Athrol Empowerment Solutions, a woman inclined retail business established to support the less privileged women who have no access to funding which she currently manages as the Chief Executive Officer.

Within a few years of its establishment, the organisation has made an impact in the promotion of the productive and improved lifestyles of its clients through well-entrenched financial inclusion, sustainability, and empowerment programmes. 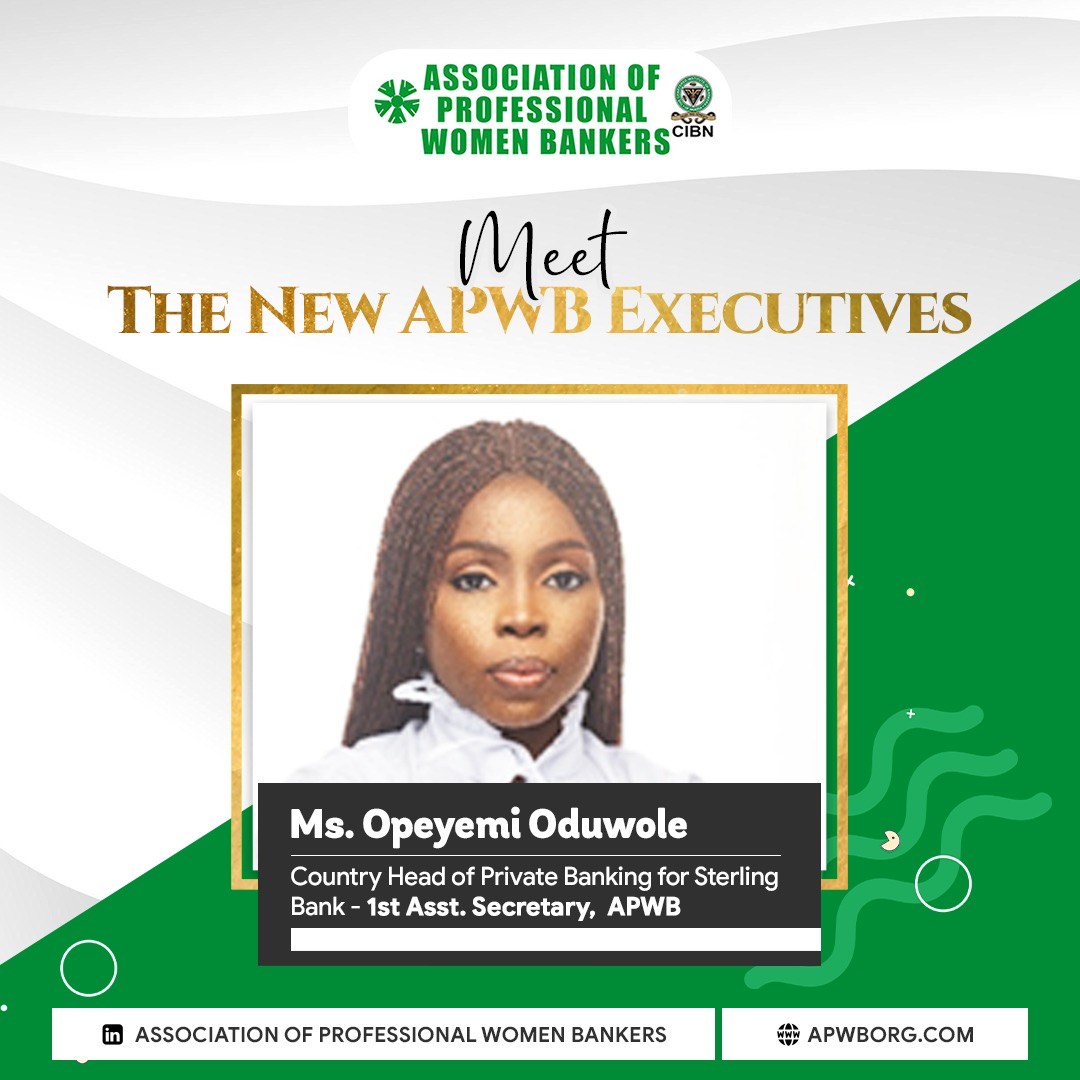 Opeyemi Oduwole is a seasoned wealth management professional with an extensive bank of knowledge on local and international wealth management as well as advisory services. She currently serves as the Country Head of Private Banking for Sterling Bank. Prior to this, Ope was Head of Privilege Banking at Diamond Bank (now Access Bank).

She also worked at Stanbic IBTC bank holding Regional Head roles, where she managed local and co-managed diaspora portfolios for High Networth and Ultra High Networth Individuals, and as Manager Business strategy where she worked in collaboration with other West African colleagues towards achieving Standard Bank’s vision for the Private Bank in West Africa during the course of her time there. 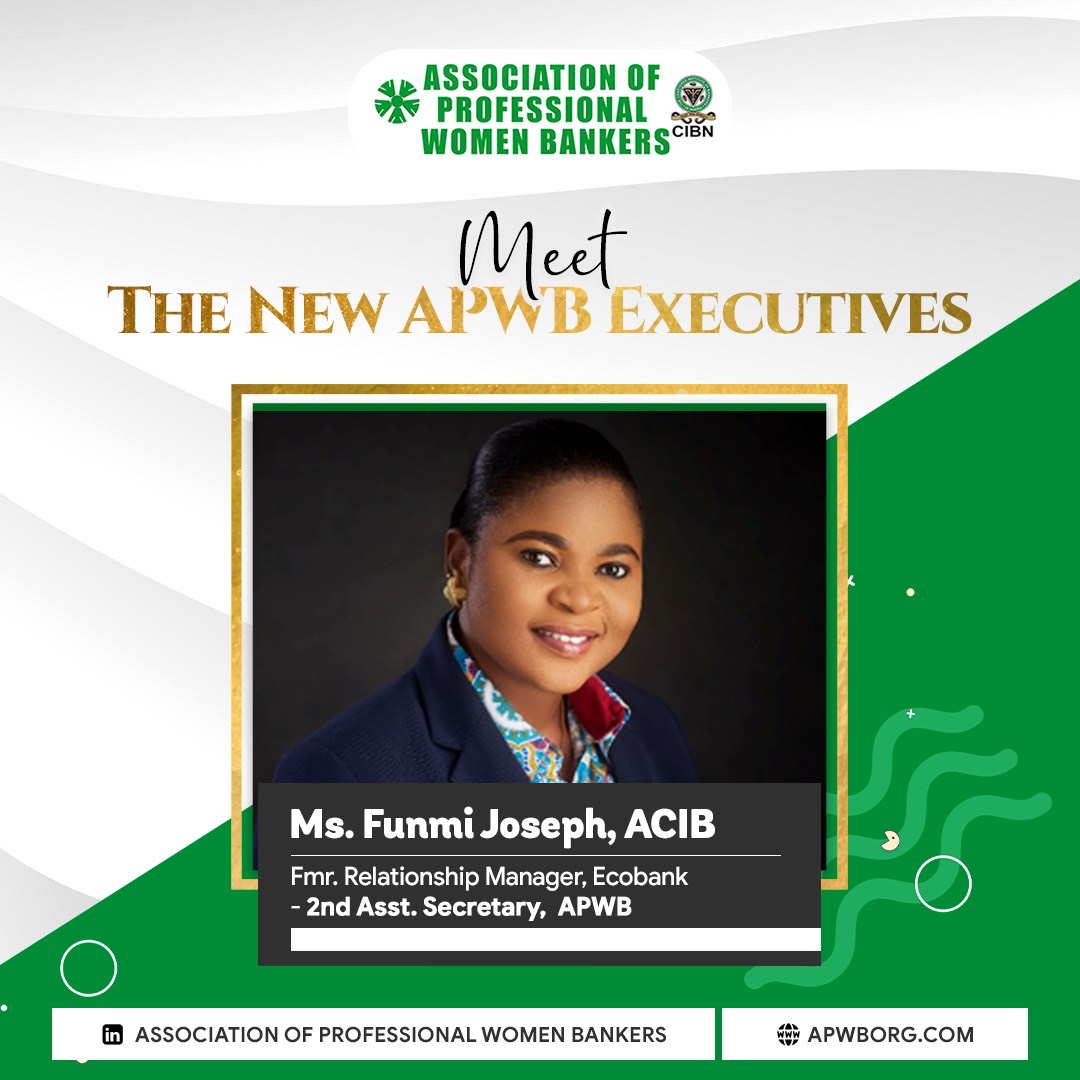 Olufunmilayo Bimbola Joseph holds a second-class upper degree in Banking & Finance from Lagos State University. She commenced her professional journey in Banking in the year 2006 when she enrolled for a certificate in Banking Programme at the Chartered Institute of Bankers of Nigeria. She had distinction in Elements of Banking in April 2007 diet of the Institute’s examination and was inducted as an Associate member of the Chartered Institute of Bankers of Nigeria in 2011.

Funmi was the Secretariat Manager of the Association of the Professional Women Bankers of Nigeria in the year 2013 and later joined Tom Associate Training, a renowned training/consulting company as the training coordinator from 2014- 2017. 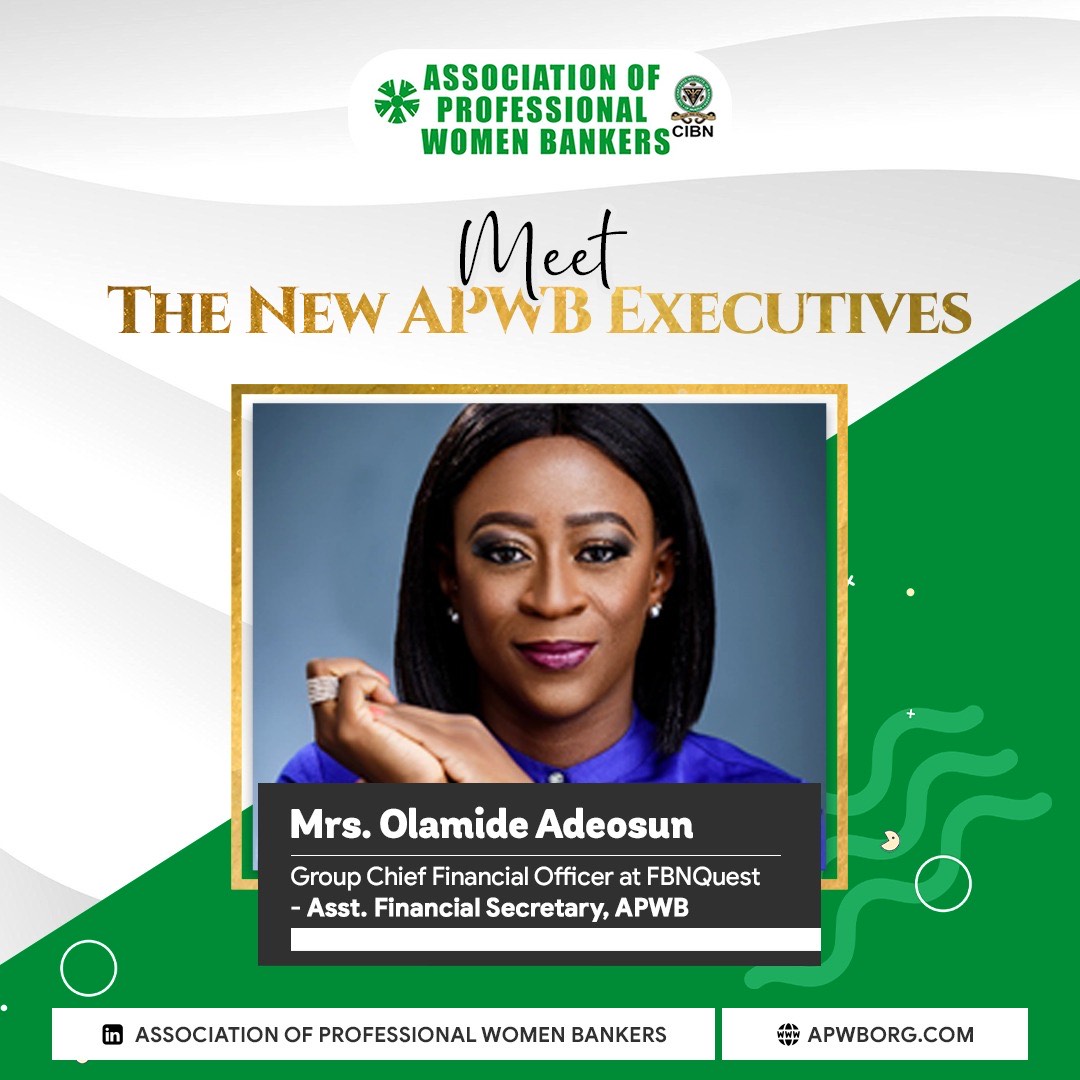 Olamide Adeosun is an experienced finance professional with over 23 years of cross-sector experience (local and international) who is passionate about positively impacting lives. Olamide is currently the Group Chief Financial Officer at FBNQuest Merchant Bank Group where she manages the Bank’s Finance and Procurement & General Services departments.

She is a member of the Bank’s executive leadership committee where she plays a significant role in increasing the cost efficiency of the Bank and charting the Bank’s pathway to a sustainable growth trajectory. 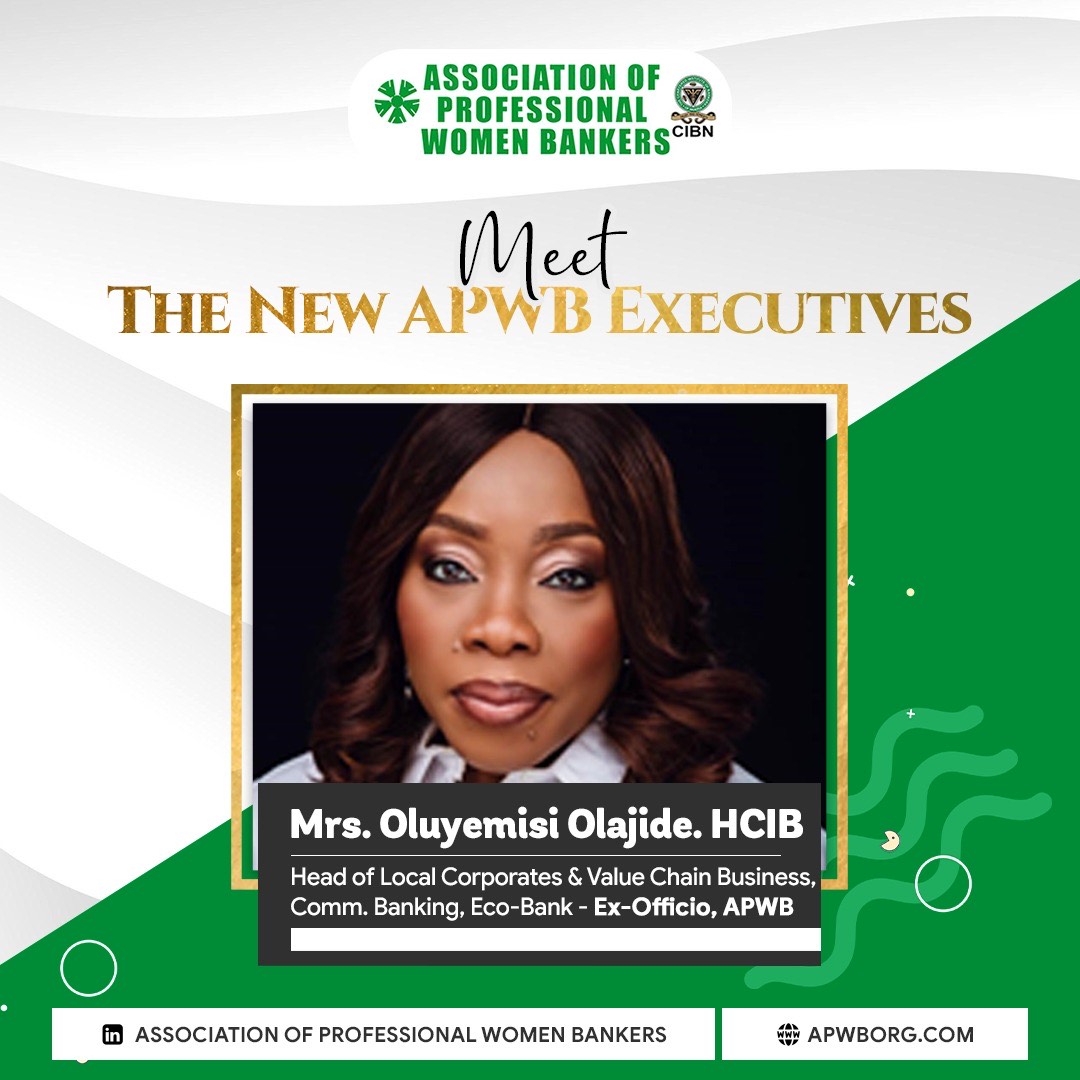 Oluyemisi Olajide is a consummate professional with over 25 years of banking experience covering Trade Finance, Asset & Liability Management, Foreign Currency Trading, Customer Sales, and Distribution. She began her banking career with Stanbic Bank (a subsidiary of Standard Bank South Africa) in 1993 and spent the next 8 years in the organization in foreign operations and treasury.  She later joined the defunct Fountain Trust Bank (now Heritage Bank) in 2001 as an Assistant Manager and continued to hone her treasury skills across various roles leading up to her last position as Head of Liquidity Management and Treasuring Sales.

Oluyemisi joined Ecobank Nigeria in August 2006 as a Manager in Treasury group and currently is the Head of Local Corporates and Value Chain Business under the Commercial Banking Group.  Prior to that, she was the Head of FICC, Clients’ businesses in Treasury.

Speaking after the inauguration of the new Excos, the incumbent chairperson, Funke Feyisitan Ladimeji, HCIB, said she was excited about this new phase and stated that the new EXCOs will focus on empowering and positioning Women Bankers for enhanced professional visibility, enhanced impact, and enhanced connectedness.

“We will do this through various capacity-building initiatives, a wide network of partners, and through recognition and celebration of female achievements, while promoting a culture of integrity and professionalism in the Banking Industry”, she said.

To learn more about this association and become a part of it, kindly visit
www.apwb.org.ng