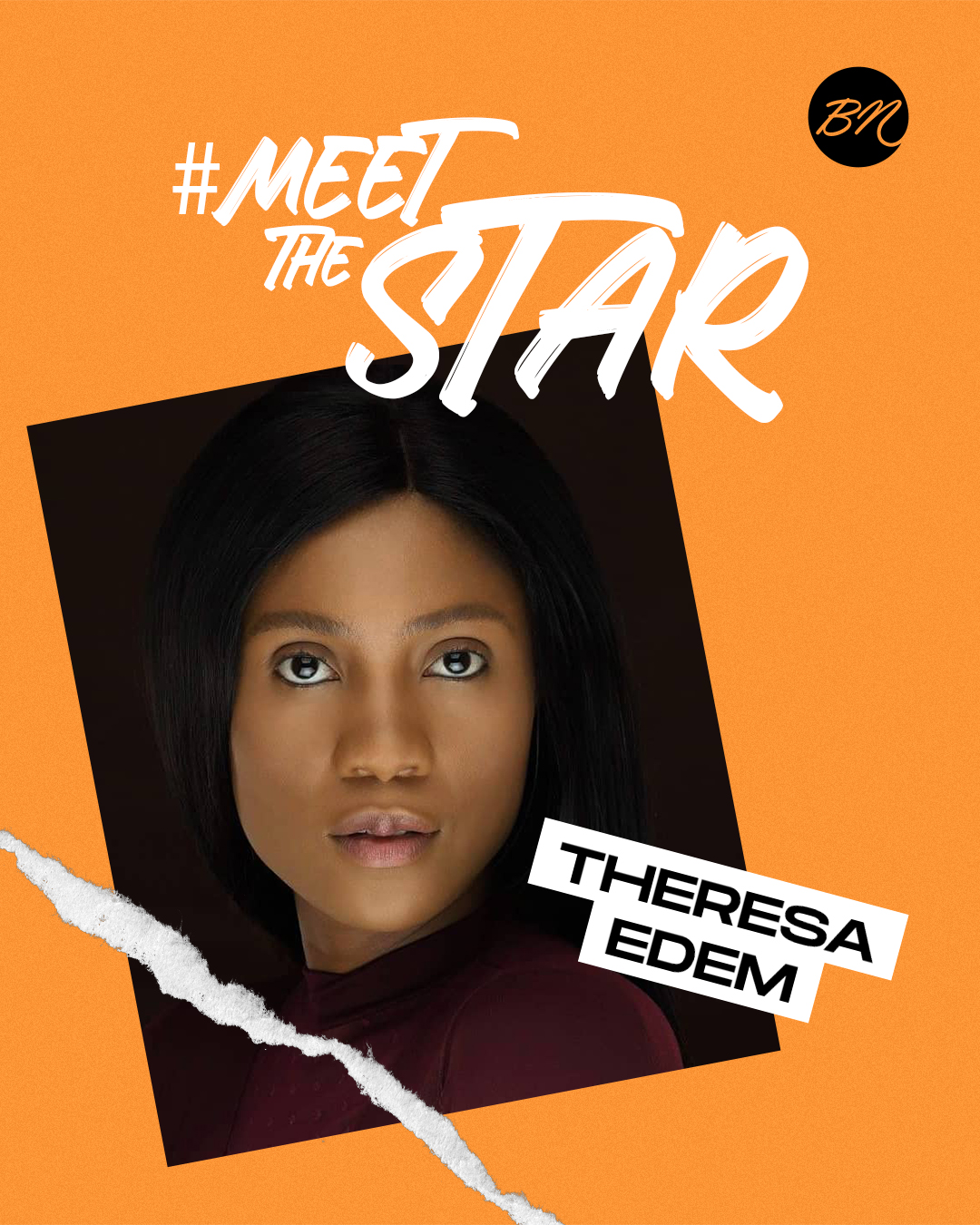 Theresa Edem, who is now a well-known figure in Nollywood, moved to Lagos for a fresh start and to pursue an acting career that began in a church play.

She is best known for her role as Haggai in “My Village People,” but she has also been in “Tinsel,” “Ayamma,” “Forbidden,” Accelerate TV’s “The Olive,” and the highly anticipated psychological thriller “Trepidation,” which just got 9 nominations at the 2022 Toronto International Nollywood Film Festival (TINFF).

In addition, she appears in the Paul Utomi-produced crime drama “Country Hard.”

In this exclusive interview with BellaNaija’s Damilola, Theresa Edem talks about how she got into acting and how film school helped her become the outstanding actress she is today. She also shared some pretty interesting fun facts that you’re probably learning for the first time.

Growing up for me was wild. I’m the last child, and I have older brothers. I think it’s about six years between me and my immediate older brother. I used to play a lot of rough games as a child. To be honest, it was because of my brothers. I remember injuring myself. I was bleeding and I came home. I didn’t realise I was bleeding. My dad said, “You’re bleeding.” I’m like, “Oh! I didn’t know.” He took me to the hospital to check what was wrong with me and why I was bleeding without knowing it. So yeah, growing up was crazy.

I used to have a wild imagination. There are a lot of things that I still think about today, and I wonder if those things happened or if they all happened in my mind. I imagined things a lot. I’d play out scenarios; I think every child does that. Imaginary friends, stuff like that. I play things out in my head. I read a lot as well. Growing up was great. I think acting has always been something I’ve had in me since I was a kid.

How did you get into acting?

I know it might sound cliche, but I got into acting through the church. I was in the drama club and I was in the debate club in primary school. I was in cultural dance as well. That’s how it all started. And then as an adult, I think in my early twenties, I used to act in church. I used to write plays and act. I directed some of them. That’s where I started acting. Then, I was living in Uyo, where I’m from. I told my pastor that I would like to pursue acting as a career. He asked, “Are you sure about that?” He said he’d pray as well. Then he finally told me one day that he’d felt a release from God and that I should pursue it as a career. I said, “great.” The next thing I told him was that I was moving to Lagos.

He was supportive, the church was supportive, my family supported me, and even the job where I used to work. My boss was very supportive. I moved to Lagos, and I thought, “What’s the best way to go into acting? I’ve always known how to act as a talent, and I know it’s not enough for it to just be a talent. I should turn it into a skill.” I decided to go to an acting school, and that was the beginning of my acting journey. I went to the Royal Arts Academy in Lagos. I did an acting course for a few months, started auditioning and that was it.

How instrumental was film school in moulding you into the actor you are today?

It was very instrumental in my becoming who I am today. Before I came to the Royal Arts Academy, I didn’t even know what a monologue was. I learned how to do a monologue. I started self-improvement. It went from just talent to skill, and it made me grow as an actor. It also gave me some acting opportunities as well.

I remember I did a film with them. It’s called, “After the Proposal.” And it was the first time I was in a movie with big names. The film had Uche Jombo and Patience Ozokwor. She played my mom, and I was the supporting actor in the film. It was a really good one. I also did “Ayamma.” That was like my first big break on the silver screen. Going to the Royal Arts Academy helped me become the actor that I am today. I learned a lot there.

You’ve starred in so many movies and series, and your resume is fantastic. One of the movies you star in, “My Village People,” is currently on Netflix. Another one is on Prime Video, which is such an amazing journey. Which one of these projects would you say is your favourite so far?

Hmm, that’s a tricky one. Let me say this first. My big break came from being on “Tinsel.” I played Angela in “Tinsel” for seven months, and Angela was in the lead role. The actor that was playing Angela before had to go have a child, so I had to stand in for seven months. I got my big break from Tinsel because it is shown across the continent. And I remember going for that audition; there were like 10,000 thereabouts, and I got picked out of all of that. Then came “Ayamma”.

I can’t choose between “My Village People” and “Country Hard” because they’re two different genres and not the same kind of film, so it’s unfair to pick one. I found “My Village People” very intriguing. From just reading the story, the characters cracked me up. “Country Hard” is also telling a story that needs to be told. The Nigerian story, the hustle story, is almost like a series of unfortunate events, so it’s crazy. But I’m thankful for my journey so far, and I appreciate what God is doing.

What was it like to see “My Village People” on Netflix?

I was happy because it was not just Netflix Nigeria, it went worldwide. I’ve had people in my DMs from across the world; from Brazil, Ghana, and Cameroon, people from different countries complimented the film. It’s such a huge platform, and I’m very thankful for that. I’ve had so many opportunities because of that. I’m very excited and glad that the film did well. We were in the top 10 for about 2 months or so, and we were also in the top 5 for a long time. I still get the love for “My Village People” even now.

I watched the trailer for “Trepidation.” If the trailer can be that intriguing, I’m sure the full movie will be so much more.

“Trepidation” is a gift that keeps on giving. It’s not even out yet; only a few people have seen it and it’s been sent to festivals. We sent it to the Toronto International Nollywood Film Festival and it got nine nominations. I got nominated as the best actress in Africa, and the director, for his first time being a director and producer, got nine nominations. We’re still waiting for more because we’ve sent it to so many festivals and award organizations. It’s a really good film, and it’s so different. There’s nothing like that out there. It’s an unpopular genre here in Nigeria. It would be nice to have Nigerians and the world experience that.

What did you do to step into the role of Etido and how did you manage to let go of that character at the end of the project?

That was a hectic character to play, and I was scared about playing that role. I remember when we went to shoot the scene at a house in the village. That house was scary, to be honest. I had to pray: “My God, please, you know, this is just a character. I don’t want to be possessed or anything.” Method acting is great, but it’s not a method that I use every time. I use a blend of acting techniques. So for that role, I did not do any method acting. I wasn’t doing things like memory recall and trying to stay one with the character even after the scene is done because it’s dark and I didn’t want stuff like that to linger. I believe acting is spiritual.

If you’re not careful, you can open yourself up to all sorts of things. I’m very careful with stuff like that. I mostly do moment-by-moment acting. I just stay in the moment at that point. Immediately they say, “Cut,” I’m out. I don’t stay in character for too long. Being on television for so long helped me. For example, in “Forbidden,” we shot it for 11 months. I shot every day, and because it’s TV, you have to get into character and get out of it quickly.

TV was like a training ground for me to get in and out of characters quickly, especially dark characters. Whenever I’m moody or I see a character still lingering with me, I play music or do things that get me out of it. So I have learned to be in the character when I hear “action” and get out when I hear “cut.”

Two fun facts about yourself that I wouldn’t be able to find in a press release?

I have an EP. The songs are good, even if it was recorded three years ago. The second fun fact is that I’m a closet comedian.

I’m about to become a published author of children’s story books. I’m nervous, scared and excited about this but yeah, exciting days ahead!