By now everyone should know what the Future Awards are. For those who don’t, this is an awards show aimed at honouring and celebrating Young Nigerians (aged between 18 – 31) who are making tremendous impacts in various fields.

The awards were launched in 2006 and recently the 2nd Edition (The Future Awards 2007) took place on Sunday, 14th of January 2007 at the Muson Centre Lagos.
It was a fabulous by all accounts. Well organized, colourful, glamorous and most of all, inspiring. 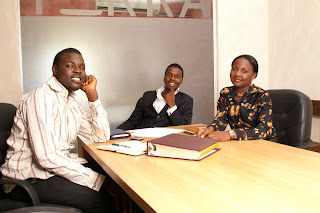 What might surprise you is that the event was organized by the RedSTRAT team –
Emilia Asim-Ita, Adebola Williams and Chude Jideonwo.
These three young people are so accomplished that I will like to tell you about but I do not even know where to start.

Emilia is one of the brains behind SLEEK, publishers of the SLEEK Magazine, and the guys behind the Creative Academii

Adebola is the Producer of Nigeria International, which shows on the NTA Network, AIT Nigeria and U.S. and BEN TV in the U.K.

Chude is the hands-down the best interviewer in Nigeria! I am not even exaggerating. Read his interviews and you will agree with me immediately (Check out the 2006 Big Brother Nigerian magazine or any recent issue of True Love West Africa). Chude published his first novel, His Father’s Knickers, when he was 13. He presently writes Sons & Daughters in Sunday THISDAY, for True Love West Africa and TAKAii.

To find out more about the RedSTRAT Team, Click HERE
Anyway, here is the list of the 2007 winners as well as exclusive photos from the event (Thanks Chude!!!!!!!!! You Rock!)

Model of the Year:
Doyin Haastrup

Best Use of Goodwill:
TELD

Musician of the Year:
D’banj

Magazine of the Year:
Juice

CONGRATS to the winners.
All the winners get a night for couples during the exclusive Winners After-Party for 50 at the enchanting Miccom Golf Resorts in Ada, Osun State, they also got phones from Celtel and Ericsson, goodie bags courtesy of Tiger Tem, a free one year membership of the British Council, a choice of books from Farafina, autographed copy of Kaine Agary’s book, Yellow Yellow, and one full day of pampering at the Venivici spa.

Model, Isio Wanogho with her date Let me know if I misnamed any of the pics.

That’s it! Have a great week.
Pleaseeeee! Leave your comments and let us know what you think of the awards, the outfits, whatever pops into your mind. By the way, the dresscode was ‘a touch of green’.

Anyways, these young people are all amazing! Very inspiring and very fab!
Related Topics:
Up Next