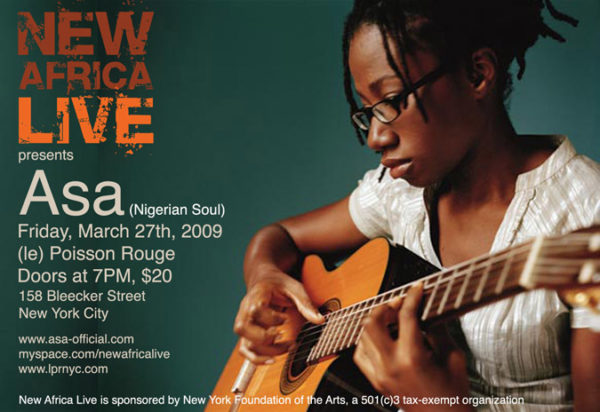 For all Asa fans, here is a chance to see her LIVE in NYC

New Africa Live returns to the fabulous (Le) Poisson Rouge in the West Village, NYC. Headlining the evening will be the fast-rising Nigerian soul singer Asa to mark her first major US tour. Born in Paris and raised in Lagos, Asa’s eponymous album was released in the US in February 2009 on Downtown/Mercer Street Records after becoming a multi-platinum selling artist in Europe with the hit single “Fire on the Mountain”. You do not want to miss this sensational rising African star and surprise special guests! Doors open at 7pm. Tickets are $20. Advance tickets available at www.lprnyc.com are highly recommended. (Le) Poisson Rouge is located at 158 Bleecker Street in New York City.