The event which kicked off with a red carpet session at 8:30 PM was hosted by soul songstress Waje and Tinsel actor Gideon Okeke and saw in attendance some of the biggest names in the Nigerian entertainment industry as well as the nominees in the various categories.

BN gives you a rundown of all the exciting and most buzzed about topics from The Future Awards 2012.
Entertainment
What’s a night of glitz and glam without entertainment? Thrilling all attendees on the D-Day were Bez, Muma Gee, Dan D’Humorous and Timi Dakolo, who also premiered his latest video “Great Nation”.

The Winners
All eyes were on Blackberry Babes star Tonto Dikeh, who took home the award for the Actor of the Year beating other top thespians including Ini Edo, OC Ukeje and Gideon Okeke amongst others, as well as the 2012 Future Awards Young Person of the Year, Idris Akinbajo.

Fashion
It comes as no surprise that here at BellaNaija.com, we ❤ fashion and we always want to see what our favorite stars will be spotted in – Some came in their best and some shouldn’t just have left the out the house, but we always love to see what they wore.

BN Picks 4 Must See Looks
Let’s kick off our must see look list with the hosts of the day – Waje and Gideon Okeke.

Ladies First! Nigerian music star, Waje arrived on the red carpet of The Future Awards 2012 in a floor length black dress accentuated with a red Ankara embroidery. She accessorized the look with gold round drop down earrings and gold cuffs.

Inside the Aztech Arcum, Waje proved she could dazzle once again by donning a brown satin knee length frock, which she accessorized with the same gold earrings she wore on the red carpet and chunky gold bracelets and finished the look with sequined pumps.

For her last look of the day, the For a Minute star donned a black and white dress paired with blue pumps – Which of Waje’s three outfits, do you like most? Let us know.

Looking  better than his famous character in Tinsel – Philip Ade Williams, the small screen actor, Gideon Okeke proved he could be thrice the charm, by showing-off  three different outfits for the day.

He arrived on the red carpet of The Future Awards in a Grey Cheque Suit and Orange pants which complimented his white tee and black bow tie and black shoes. Later on, Gideon chose to wear a black suit as he hosted the show with Waje and ended his different wardrobe changes in another grey suit, this time, he paired the suit with a black button-up shirt and pocket square and a gold watch. – Which of his outfits, do you think he rocked better? 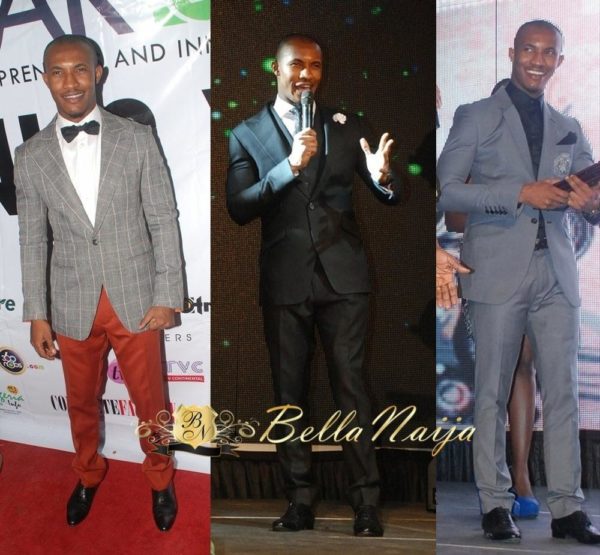 What better way to shine more than all the biggest stars gathered in one place – you show up in a eye catching outfit, that’s what Muma Gee did. For her red carpet arrival and on stage performance, the Port Harcourt is Back music act, wore a custom gold ensemble with a black see-through shawl, which she accessorized with a gold headband, bracelets, shoe and lots of pearls.

What do you think of her outfit? 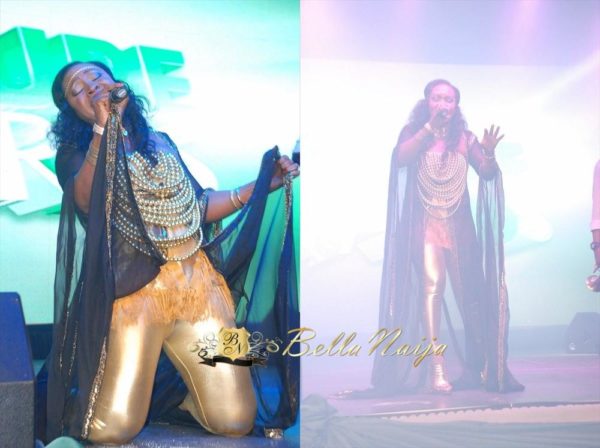 Adora accessorized her look with both gold and silver necklaces, gold earring, a diamond encrusted ring and finished off her look by letting her locks down. P.S: Did we mention she absolutely looked fab with her super glam make-up. Yay or Nay, what’s your take on Adora’s dress? 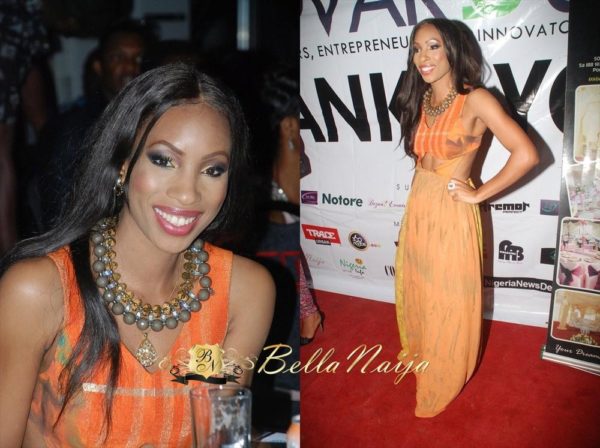 Other “must see looks” of the night include; Tonto Dikeh in a one shoulder pink dress with a high slit which she accessorized with a glam hair do similar to the one Beyonce wore in the movie Dream Girls, a black belt with gold stud and Christian Louboutin Pigalle Spikes, Nigerian model Makida Moka in a white mini dress, Michelle Dede’s tribal LBD, OC Ukeje’s double breasted black suit, Kemi Lala Akindoju’s sequined black dress and illrymz’s blue suit. 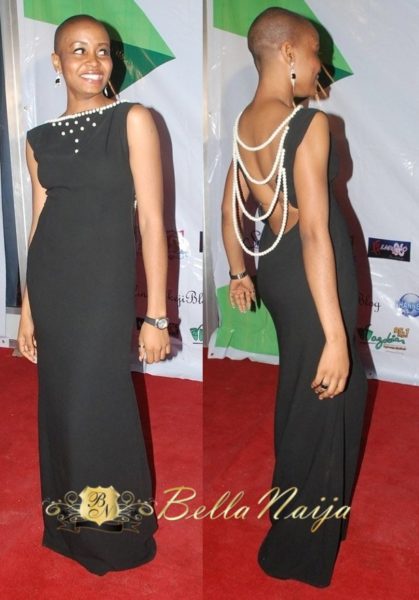 BN Cuisine With Chef Fregz: Kitchen Tips For The Win