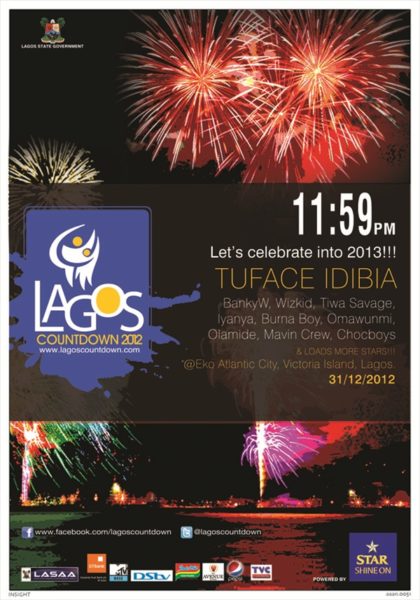 The 2012 Lagos Countdown is a world-class celebration of the end of one year and the beginning of another…Lagos Style. The series of event will take place at Eko Atlantic City (Ahmadu Bello way through Bar Beach stretch until Eko Atlantic Office). The event is being conceived to create an end of year crossover tradition that would engage citizens of the state (and visitors) throughout the end of year holiday season. The event will take special significance at the Eko Atlantic City particularly because all of the land that was washed away by the ocean over 50 years ago, which is now being reclaimed.

Speaking at a news briefing prior to the commencement of the event, the managing director of LASAA, George Noah, said the Lagos Countdown Event will be in the form of that witnessed in major cities of the world like Time Square, New York and Trafalgar Square, London. With a maximum of 15,000 participants followed by a specially created audio midnight countdown and a 20-minute live show anchored from the rooftop of Avenue Suites, Victoria Island, Lagos, the countdown, which includes appearances by top music artists, will showcase display of lights, music, fireworks, pyrotechnics and lighting effects to signify the commencement of the New Year at the Eko Atlantic City on December 31 from 8PM.

This maiden edition of the Lagos Countdown is sponsored by GT Bank, Indomie Noodles, Avenue Suites, DStv, Pepsi, and is powered by Star Lager Beer.