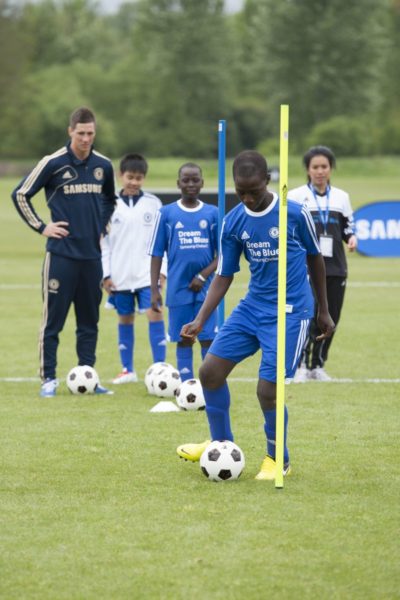 Samsung Electronics held the finale of its “Dream the Blues” Campaign; a corporate social responsibility initiative aimed at supporting youths discover and expand their potentials in football on 14 May 2013 in London. The finale involved 14 football-loving kids from 7 countries was an inspiring event and featured 2 Nigerian  boys – Jeb Mallam, 9yrs from the SOS Village, Abuja and Moses Magnut (13) from the Compassionate Home Orphanages, Lagos and 12 other kids from Brazil, China, Ghana, Mexico, South Africa, and Thailand.

The event started with an opening dinner where the kids flew their national flags, met with Chelsea FC Foundation coaches; Steve Winnet and Oliver Woodall and took pat on bonding exercises and try-out football stunts. The kids also had the opportunity to train in the same facility where the actual Chelsea star players train, were taken on a tour of Stamford Bridge and watched from pitch-side seats as Chelsea won the UEFA European League.

Chelsea players and “Dream the Blues” ambassadors Fernando Torres, Victor Moses, Oscar, and Juan Mata held training and mentoring sessions with the boys on the their training pitch. Speaking during the encounter, Fernando Torres said “It is wonderful to have the chance to play with the kids. I think the chances that Samsung and Chelsea Football Club give to them are huge. I wish I had this chance when I was a kid”. Excited Moses Magnut commented “My life has changed forever. I know now, for sure that all my dreams can come true. I will never forget this moment”. 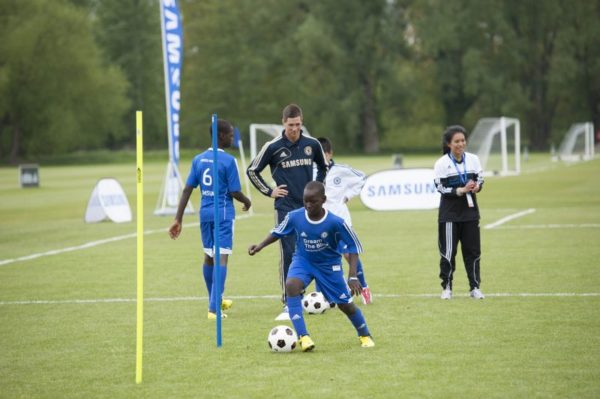 According to Bravo Kim, Managing Director, Samsung Electronics West Africa, “We are proud to continue our support for the dreams of the youths through this football experience. Samsung believes in supporting and motivating youths to discover and expand possibilities for themselves. We hope this camp in London is a meaningful step and a great opportunity for the participants to come closer to their dreams”.

The “Dream the Blues” team had a time of their lives in London. They dined at the London Museum’s Ironmongers Hall, an iconic building, the location where some of the scenes of the Harry Potter movies was filmed. They visited Lyceum Theatre where they watched a stage production of the Lion King and enjoyed a private capsule rotation on the London Eye and were treated to the finest cuisines.